Let the Sunday people into the USA

Abraham Miller barely conceals his indignation in The Blaze at the US administration as he pleads for it to give asylum to Christians fleeing the Middle East, who do not qualify for resettlement. The Christians are following the Jews out of Egypt, but Israel took in the Jews of the Islamic world without a penny of international assistance.

In October 2011, violent clashes occurred in Cairo between Coptic Christians and Muslims, a direct result of the Muslim-dominated government brought to power with the assent of the administration of President Barack Obama.

My friend, the late Joseph Wahed, whose family’s roots went back a thousand years in the city and whose entire family was thrown out in a single night in 1952, watched the conflagrations in Cairo’s streets and remembered the prophecy of his Coptic neighbor. As Wahed’s family was being banished from the only homeland they knew, his neighbor uttered an old Muslim proverb, “After Saturday comes Sunday.”

He was reflecting on the future of his fellow Coptic Christians, for the proverb was widely taken to mean that first Islam will get rid of the Jews and then the Christians. Wahed was so moved by this memory that he penned a letter about it that appeared in the Wall Street Journal on Oct. 17, 2011.

But this was not the only part of that experience that stirred Wahed. He was upset by a statement in the Journal’s coverage of the clashes, which felt a need to issue the obligatory apologia for Islamic culture:


“Egyptians have long prided themselves on a shared sense of citizenship that straddles religious boundaries.”

Of course, this is politically correct nonsense. Egyptian law prevented Jews and some Christians from acquiring citizenship. Dhimmi, the Islamic imposition of de jure second class citizenship on non-Muslims, was part of Egyptian law into the 1920s. Christians, watching the mass exile of Jews from Islamic countries, wondered when the inevitable Sunday following Saturday would make it their turn.

And so it has happened in more ways than one. 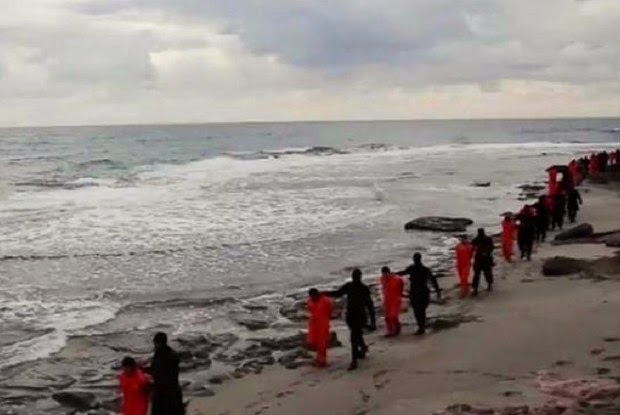 Egyptian Coptic Christians in orange jumpsuits being led along a beach, each accompanied by a masked Islamic State militant. Egypt is making an ambitious bid to place itself at the center of the fight against extremism across the Middle East. Beyond fighting militants in its own Sinai Peninsula, it is trying to organize an international coalition against the Islamic State in Libya and helping Saudi Arabia defend its borders.(Photo: AP , File)

As the world ignored the mass expulsion of Jews from the Islamic world, it is also ignoring the reality of what is happening to Christians. It was tiny Israel, barely born, that took in the Jews of the Islamic world. There was not a penny of international assistance from the United Nations, the mainstream Protestant Churches that now advocate boycotting Israel, or anyone in the international community. Israel took in these refugees even when there was not enough food in the country to feed everyone three meals a day.

Who will take in the Christians? Who will stand up and acknowledge their plight? Certainly not President Barack Obama! He is incapable of mouthing the word, “Christian,” to acknowledge those who are the latest victims of Islamic State in Libya.

But if that were not sufficient to spark outrage, Christians that are victims of Islamic State in Syria and Iraq do not qualify for resettlement in America, as do Muslims.

The Department of State is adhering strictly to a rule that only refugees in refugee camps qualify for resettlement. Christians stay away from refugee camps as they are dominated by Muslim refugees and have Islamic State collaborators in them. The president who has a cell phone, a pen, and an ability to trample the Constitution when it comes to admitting illegal immigrants has no tools at his disposal for helping Christians fleeing Islamic State. The Christians are seeking safe haven, not economic advancement.

There are no Jewish refugees in Iraq or Syria. They were expelled more than half a century ago. Their expulsion was indeed a harbinger of things to come, and the manner in which the world chose to ignore their plight was also a portent of what would befall the Sunday people.

The president will take no action on their behalf. The mainstream liberal churches are too busy trying to boycott Israel to be concerned with their Christian brethren. The campuses are too consumed with destroying capitalism and apologizing for Islam to take notice.

off topic//
important article by Prof Robert Wistrich on Judeophobia & anti-Zionism in Europe today, especially on the part of Muslims in europe