A recent Facebook video from the shrine of Ezra the Scribe, some 400 kilometres south of Baghdad, has confirmed what many have suspected for some years: this tomb, that Jews have revered since Biblical times, has now been transformed into a mosque. Lyn Julius writes in Arutz Sheva: 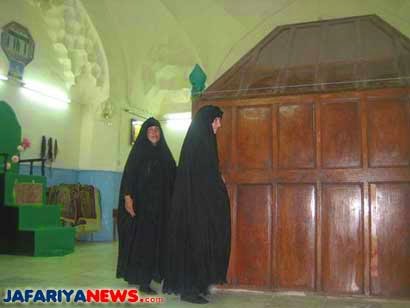 Click here for Video
(with thanks: IraqiJews of Babylon)

During the period of the Second Temple (516 BCE - 70 CE) Ezra the Scribe led the Jewish exiles back to Jerusalem from Persia. He is either thought to have died in Jerusalem or in Uzair, near Basra.

Ezra's tomb was in Jewish hands until the mass exodus of 1950 - 51. Now, however, Koranic inscriptions and hadith hang on the walls and much green paint has been used to decorate the building.

But the video does show that Hebrew inscriptions still survive, namely psalms inscribed on marble or wooden plaques. These are typical of Jewish holy places in Iraq. They are shaped like lamps - the menorot of the Temple - and bear the ineffable four-letter name of God.

Peer through a window into the sarcophagus and you will see an inscription in Hebrew identifying it as the final resting place of Ezra the Scribe.

At least the shrine is still standing. Last week, Arutz Sheva quoted a report in the Arabic press that the 'Ezra synagogue' had been largely destroyed by a terrorist militia, raising fears that the shrine of Ezra the Scribe had been lost.

But the synagogue in question is thought to be located in the Shia Muslim city of Basra; the militia wants to make the synagogue its southern headquarters. Apparently quite a few sites - Muslim as well as Jewish - have been damaged or destroyed, but the authorities and media have been intimidated into silence by the terrorists.

Since the Islamic State (ISIS) terrorist group led a Sunni takeover of huge swathes of northern Iraq, the country has seen the establishment of dozens of Iranian-backed Shia Islamist militias - based largely in the Shia-dominated south - which are currently fighting alongside Iraqi government forces against ISIS. But these militias have also been accused of committing similar crimes against Sunni Muslims as ISIS has against Shias - and these latest reports seem to indicate it is abusing religious and historical sites similarly as well.

Since 2010, there has been concern that the shrine of Ezekiel at Al-Kifl south of Baghdad, the most important of Jewish holy sites in Iraq, was also being converted into a mosque, and Hebrew inscriptions were being painted over.
These reports turned out mostly false, but one visitor testified to the loudspeakers affixed to the outside to call the Muslim faithful to prayer.

No substantial renovation work has been done to the shrine since, as the religious authorities and the ministry of heritage wrangle over the future of the site. Meanwhile, the fabric of the building, already  in a state of disrepair, deteriorates further.

In the north of Iraq, the Jihadists of Islamic State have blown up the shrines of Jonah and Seth. There are also fears for the crumbling shrine of the prophet Nahum at Al-Kosh and the tomb of Daniel in Kirkuk - the latter of which was also reported destroyed by some sources last year.

All these sites used to attract hundreds, if not thousands of Jewish pilgrims in the heyday of the 150,000-strong, pre-1948 community. Now that there are only five Jews left in Iraq, it is difficult to see how  the inexorable process of de-Judaisation can be reversed.

Irina Bokova, director-general of UNESCO, has been sincere in her desire to protect Jewish and other heritage in the Middle East, but there is a limit to what the organisation can do when whole swathes of Syria and Iraq have fallen under the iconoclastic control of Islamic State.

Read article in full
Posted by bataween at Wednesday, February 18, 2015