While  other Tunisian cities have been losing their Jews, Djerba has maintained its Jewish population at about 1, 000. The reason, argues Lucette Lagnado, is the high fertility rate among the orthodox Jewish women of the island. But a bid to improve female education may soon end all that. Feature article in the Wall St Journal (with thanks: Lily; Dan):

Over the longer term, the greatest threat to Djerba’s Jews may come, not from without, but from within. Jews have lived on this storied island for centuries and, some believe, since Biblical times. Ancient traditions guide every aspect of Djerban Jewish life, but modernity is slowly encroaching. Laptops, iPhones and TV sets are ubiquitous.

Perhaps the biggest question mark revolves around the role of women in society. Largely absent from the workforce, Djerba’s Jewish women generally are expected to lead traditional lives tending to husbands and families.

In Tunis, by contrast, only 300-400 Jews remain—down from tens of thousands. Many of them are elderly and frail.

Youssef Wazan, the president of the community, argues that Djerban Jews have done better than other Arab Jews precisely because they have fought against the lure of modern times—including assimilation and the changing role of women.

“Listen, the Jews in Tunisia, they had their freedoms…and they all left,” he says. “Our synagogues are full every day and on the Sabbath, we don’t work—nothing. If you look at France you don’t see that even on Yom Kippur. That is why we don’t want modernity.”

And yet, at the fringes of society and in subtle ways, Djerban women are evolving. Two agents of change are cousins Alite and Hanna Sabban, who have fought to bring greater educational opportunities to the girls of Djerba.

They are far from radical. Married to two brothers, Hanna, 34 years old, has four children, while Alite, 33, has seven. Neither has an advanced education. Both are deeply observant, and embrace the importance of religion and the traditional role of Djerban Jewish women as wives and mothers. But they are also critical of their culture’s failings with respect to women and feel that even within the confines of Djerba’s conservative beliefs, there is much room to evolve.

Educating girls hasn’t been a high priority in Djerba’s Jewish community. Historically, in fact, they weren’t educated at all, and most were illiterate until well into the 20th century.

For boys, an education, at least a religious one, has always been a key part of life on Djerba. They study Hebrew and the Torah from morning to night, in classes taught by rabbis. That education was formalized with the establishment in the 1960s of modern-day religious schools known as “Yeshivot.”
But women’s education didn’t exist. In the early 1950s, resident David Kidouchim started a part-time school for girls teaching them to read and write in Hebrew. Though it was only two hours a day, his school was seen as transformational, and he became a local hero.

To the Sabban women, it is no longer enough. “When a girl goes to school for two hours, what can she do?” Alite asks. “We wanted more studies, we wanted for the girls to develop academically.”
They speak from personal experience. Growing up, Hanna was the luckier one. Her parents allowed her to attend the Arab public lycée outside of the main Jewish quarter, so she received more of a secular, full-time education. But she left at 14, she says, before she could get the prized baccalaureate. The two women bonded because of shared frustrations and a sense that life for a Jewish girl could be better—even within the confines of faith and tradition. 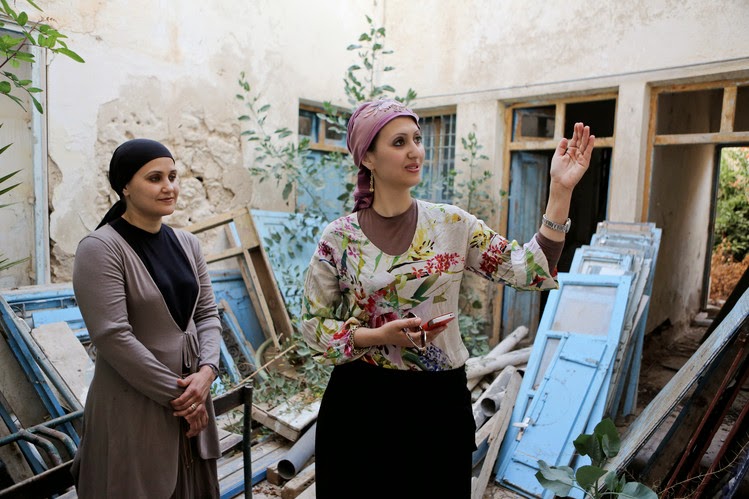 Hanna Sabban and her sister-in-law Alite Sabban stand in the middle of an abandoned house they recently purchased in hopes of establishing Djerba’s first full-time school for girls. (Photo: Danielle Zalcman, WSJ)
Posted by bataween at Sunday, February 15, 2015

When will older communities learn that women can and will balance a home life with a work life? Educating people is only a good thing

This is from a caption in the article, which uses the word "thriving." Simon Saghroun is the sole Jewish doctor in the main Jewish quarter. He believes Djerba’s community is unique in the Arab countries because it is thriving and growing even as most others have vanished.

Therefore, because the Jews of Tunis have children, one can call that population a "thriving" one. In this reasoning, Dr. Saghroun and Ms Lagnado err: the only truly thriving Jewish communities in the Arab countries are the ones that have been transplanted elsewhere, notably Israel.
--malca

Dr Saghroun was talking only about Djerba, not about Tunisia as a whole