A sheep in Woolf's clothing? 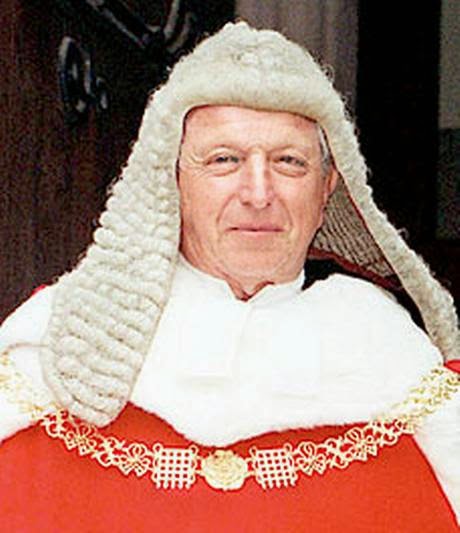 For a man who is married to Marguerite, an Iraqi Jew, British Jewish judge Lord Woolf shows a disappointingly feckless grasp of Islamic extremism. He of all people should not be buying into the myth of peaceful coexistence between Muslims, Christians and Jews, argues Douglas Murray in The Spectator, awarding him the Simon Hughes prize for supineness (with thanks: Lily):
In the midst of all this self-denigration and theological presumption the good Lord was kind enough to describe the attack on Charlie Hebdo in Paris as ‘horrendous’.  For which we must be grateful.  But according to the Times he also said:

‘The right to freedom of thought, conscience and religion and to manifest such beliefs was part of the Human Rights Act 1998 but such rights must be exercised ‘in a way which respects the sensitivities and needs of other individuals, groups or society as a whole.
‘In other words, they should be exercised reasonably and in a manner that does not impinge disproportionately on the rights of others.’

The Islamic Centre and Woolf Institute, of which he is patron, were both bodies that could help by making it clear that ‘such attacks are a betrayal of Islam and foreign to its true belief’.
I suppose it may come as a surprise to Lord Woolf to learn that they are no such thing.  One might wish they were.  An ignorant person might think they were.  But Lord Woolf cannot possibly be such an ignorant man.  And in any case why is he telling people what Islam is or isn’t?  Isn’t it enough that we already have a Prime Minister and US President who think it part of their role to interpret Islam for the rest of us poor semi-literate mortals?  If you thought it couldn’t get worse, it did, as Lord Woolf said that:

‘For over 1000 years, Jews and Christians lived safely in Arab countries contributing to the wellbeing of all.
‘Insha’Allah that with the support of all those of goodwill we see the same situation once again in the West as well as in the Middle East.’

Why not mention all those times when Jews and Christians didn’t live ‘safely in Arab countries’?  Why not talk about the fact that Jews have had to flee most Arab countries and that Christians are in the process of doing so even as the good Lord witters on, completing a process of ethnic and religious cleansing which began in the days of Mohammed?  And ‘Insha’Allah’.  Really?  Does Lord Woolf – a Jewish British judge – really need ‘Allah’ to will anything?
I had thought that the supine man after whom the Simon Hughes award is named (a gay or possibly bisexual Liberal Democrat Catholic) could never be beaten to his own prize.  But Lord Woolf’s effort suggests that next year’s awards might have to be renamed. The Woolf in sheep’s clothing award?
Read article in full
Posted by bataween at Friday, February 13, 2015