Has Berlin-born poet Natan Zach lost it? Israel's iconic poet has a history of making shocking statements. But Zach’s most controversial moment may have been in July 2010, when, in an interview on Army Radio, he made a comparison between European and Middle Eastern Jews, saying: “The one lot comes from the highest culture there is – Western European culture — and the other lot comes from the caves.” Now the 'cavemen' have responded with a petition calling for Zach's works to be dropped from the schools curriculum. Haaretz reports: 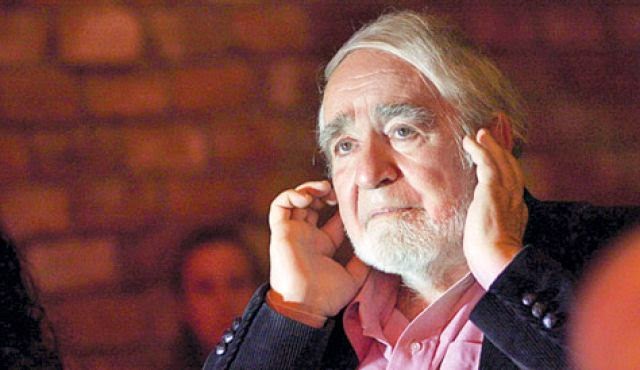 Poet Natan Zach's comments last week on the Channel 10 television show "Hamakor" ("The Source" ) have resulted in a petition accusing him of racism.
The petition, which has been uploaded to the Web, calls upon Education Minister Gideon Sa'ar to take immediate measures against the 80-year-old Israel Prize laureate.

The petition specifically calls for Sa'ar to remove Zach's works from the educational curriculum, to revoke his appointments at every academic institutions where he is employed and to add content addressing the history and culture of Jews with roots in the Middle East to the curriculum.

In an interview conducted with Zach about a week ago, the poet described his impressions of Israeli television, saying that "the Jews from the Oriental communities will get the blacks and the Ashkenazis [European Jews] will get the bastards."

The petition states: "It is inconceivable that students, certainly the Mizrahim [Jews of Middle Eastern descent], will be asked to memorize poems by the man who scorns their culture and publicly defines it as an inferior culture... It is the obligation of the Ministry of Education to make it clear to him and to the entire public that it will not permit such despicable opinions to be sheltered under its wing."

While those who initiated the petition have remained anonymous, so far over 500 people have signed the petition, among them many prominent cultural figures, including writer Yossi Sukari, artist Shula Keshet, poet Mati Shmuelof, artist Shay Pardo, musician Ravid Kahalani and cultural researcher Sivan Shtang.

Responding to Zach's remarks, Sukari says the poet's view that Western culture is superior to Mizrahi culture is based on the parameters of the sole culture in which he is submerged.

"Even if we allow this relativist outlook and accept that it is possible to create a hierarchy among cultures and find specific differences whereby one culture is superior to another, the preferential treatment of one ethnic group and the diminution of another still amount to racism," argues Sukari.

Furthermore, he says, "With regard to the fact that we came from 'the caves,' I would like to say that to my great regret, the only person actually in a cave is Natan Zach himself - where it's so dark it's impossible to see even the shadows."

Read article in full
Posted by bataween at Tuesday, January 20, 2015

Being a racist is okay if you're a pro-Arab leftist.

I must say that Sukari was rather clever by alluding to Plato's notion of the limited perception of men in a cave.

I for one am not especially impressed with what I have seen of Zakh's poetry. So the Ministry of Education can get rid of it on esthetic grounds.

My position is that the distinction between western European culture and middle eastern culture is rather artificial, especially if we look at the influence of the ancient East on what is called the culture of classical Greece. At the same time, the Arab conquest and Islam did much to degrade the culture of the lands that they conquered, although non-Muslims often far surpassed the Muslims when Western education was offered to them, as by the Alliance, etc.
German philosophers like Kant and Hegel spilled a lot of ink in deprecating the culture of the East [ME], even in ancient times when middle eastern lands were centers of civilization. Zakh was likely influenced by the arguments of Kant, Hegel, Voltaire and their ilk. It should also be pointed out that at least one researcher has shown that Kant and Hegel not only deprecated the East but put Jews on the lowest level of eastern culture. That is, they wrote that Jews were inferior even in the middle eastern context. Even in antiquity.