Jews were deliberately targeted in the Paris atrocities: curiously, they were mostly of Tunisian extraction. Yet Tunisia seems safer for Jews than France nowadays*. Lyn Julius blogs in the Times of Israel: 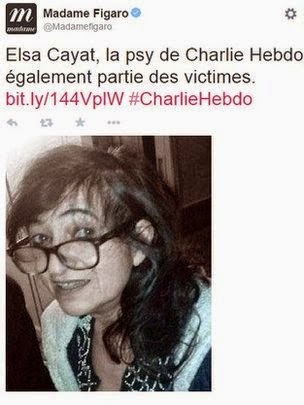 Elsa Cayat, singled out for murder at the Charlie Hebdo offices for being Jewish. It has come to light that she received death threats before the attack

In the aftermath of the Paris atrocities last week, some are complaining that the media have not made enough of the fact that Jews were specifically targeted by the Islamist terrorists. The attack on the Hyper Cacher kosher supermaket was not a fluke, it was deliberate.

Jew-hatred is a central, but underplayed plank of Islamist ideology. If no Jews have died in Syria and Iraq in the region under Islamic State control, it is because there are no Jews left to murder in those areas. They have all already been ethnically cleansed.

One interesting aspect of last week’s dreadful atrocities in Paris – but again not highlighted by the media – is that Tunisian Jews figure disproportionately among the victims. Disproportionate because the French Jewish community, although composed mostly of Jews from North Africa, also hails from Algeria and Morocco.

Johan Cohen, 22, had a Tunisian mother. His grandmother was the celebrated Tunisian-Jewish singer Doukha, who died in December.

Francois-Michel Saada, 64, was born in Tunis.

It is not clear which country Philippe Braham’s family was from: but this fourth hostage, in his 40s, was also from North Africa.

At the Charlie Hebdo offices, two Jews died, both of Tunisian extraction: Georges Wolinski, 80, was born in Tunis of a Polish-Jewish father and Sephardi mother. Georges Wolinski’s father sought a haven from Nazi Europe, only to be murdered by one of his employees in a Muslim land. Elsa Cayat’s father was from Sfax in Tunisia.

Elsa Cayat, a psychiatrist who wrote a twice-monthly column for Charlie Hebdo, was almost certainly singled out because she was Jewish. Why? Because another journalist, Sigolene Vinson, was spared ‘because she was a woman’. (...)

But Elsa Cayat was not spared.

All this is heavy with irony. These are Jews whose families left Tunisia largely because Jews were being pushed to the margins of society and because the authorities could not or would not protect them against spasmodic violence.
All these Tunisian Jews had sought refuge in France. Now France cannot ensure a secure future for them or their children. Seventy-five percent of France’s Jews are reportedly seeking to leave.

Yet Yoav Hattab had told his father Benjamin, the rabbi of the great synagogue in Tunis, that merely to walk around wearing a kippa in Paris was dangerous. His father never imagined, he said on French TV, that his son would be less safe in Paris than he was in Tunisia*.

" Hattab's aunt, who he had never met, was killed when she was 14-years-old during an attack on a synagogue on the island of Djerba in Tunisia. On October 8th 1985, a local police officer opened fire during Simchat Torah prayers at the synagogue, killing three people – one of them Yehudit Bucharis. Yehudit's mother, and Yoav's grandmother, now lives in the city of Ofakim in southern Israel. 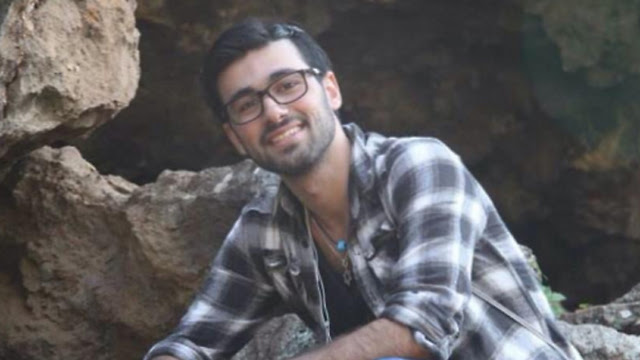 Hattab was killed while trying to take weapon from terrorist.

"The synagogue attack in 1985 came about a week after Israel had bombed the PLO headquarters in Tunisia as part of Operation Wooden Leg. The bombing led the Jewish community of Tunisia to fear they would suffer retribution attacks. After a quiet yet tense week – which included insults and isolated incidents of stone throwing at Jewish stores – the shooting attack occurred at the Tunisian synagogue."

The funeral is underway now at Har HaMenuhot.