Why Jewish refugees are the key to peace 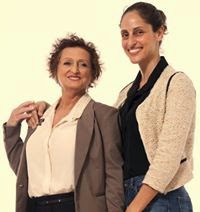 As long as Arab Palestinians consider themselves victims of an egregious injustice, they will never be able to reconcile with the Jews. That's why Jewish refugees are the key to peace, argues Adi Schwartz in this article for i24 News.

Janet Dallal (pictured left, with her daughter)  was walking around the Israeli president's residence earlier this week like a bride on her wedding night. At last, more than five decades after the Middle East was ethnically cleansed of its Jewish population, the State of Israel dedicated on November 30th its first ever Day of Commemoration for the forced exodus of hundreds of thousands of Jews from Arab countries.

When President Reuven Rivlin took to the podium to deliver his speech, Iraqi-born Dallal was clearly thrilled, as her personal and collective ordeal was finally recognized by the state.

But her face was also wrinkled with sorrow and despair for the long time she had had to wait. In fact, it is still more common in today's Israel to hear about the Palestinian uprooting in the Arab-Israeli war of 1948 ("Naqba") than about the Jewish displacement from Arab countries. And not only in Israel: the alleged injustice caused to the Palestinians has gained worldwide recognition, while the Jewish plight remained completely forgotten.

In 1948, some 850,000 Jews lived in Arab countries from Morocco in the West to Iraq in the East, and from Yemen in the South to Syria in the North. In most cases, they predated the Muslim conquest of these areas. Despite their sometimes extraordinary personal and communal achievements, Jews were always considered to be second-class under Muslim rule. They suffered from discrimination, persecution and even physical attacks.

The rise of Arab nationalism and the heightened conflict over the holy land in the first half of the 20th century worsened their situation. Jews were fired from their jobs, their bank accounts were frozen and their houses and synagogues were looted. In a few pogroms throughout the 1940s hundreds of Jews were massacred across the region. In some of the countries, the Jews were expelled. In others, they found it unbearable to stay and had to flee, most of them to Israel.

Much has been done in the last decade to make the history of the Jews from Arab countries a part of Israel's national narrative. High schools dedicate more and more hours to teaching their story. The Israeli parliament passed a few laws requiring that any future peace negotiations would include compensation for Jewish property left behind in Arab countries. Jewish organizations initiated parallel legislation in the United States and Canada. Even the United Nations – an organization that is quite hostile towards Israel – accommodated this week a commemoration event for the Jewish communities of the Middle East.

But the work is far from complete. The destruction of these ancient Jewish communities is still not a household word. Further academic research and publications are in dire need. The State of Israel should incorporate the issue more courageously in its diplomatic efforts. And above all – there are still hundreds of thousands of survivors whose testimonies are waiting to be heard. These Jews, residing mainly in Israel but also in Europe and North America, are eager to recount their stories. A major collective effort should be made to do this as soon as possible, as the witnesses are getting older by the day.

This is not however only a Jewish or Israeli concern. The history of Jews in Arab countries, and its final painful episode in the middle of the 20th century, should interest anyone who has even the slightest stake in the current Arab-Israeli conflict.

As long as the Arab Palestinians consider themselves to be the ultimate victims of an egregious injustice, they will never be able to reconcile with the Jews. As long as they are oblivious to the fact that Middle Eastern indigenous Jews were discriminated against under Muslim rule and finally expelled, they will never understand why Jews have the right to have their own sovereign state in the Middle East. And as long as the Arab world sees the Jews as some kind of a foreign Western outpost in the region, similar to the Crusaders, then peace has no chance.

Read article in full
Posted by bataween at Sunday, December 07, 2014