Whose heritage is it anyway?

A debate appears to be raging:  who owns Syrian Jewish bibles?Are they communal or national heritage? At first sight, Rabbi Avraham Hamra's objection to the national library of Israel safeguarding the priceless manuscripts he himself helped to smuggle out of Syria sets a precedent. But who does Rabbi Hamra speak for, given that he is not connected to the Damascus Jewry Organisation in Israel, which supports the library's initiative? Report by i24 News. 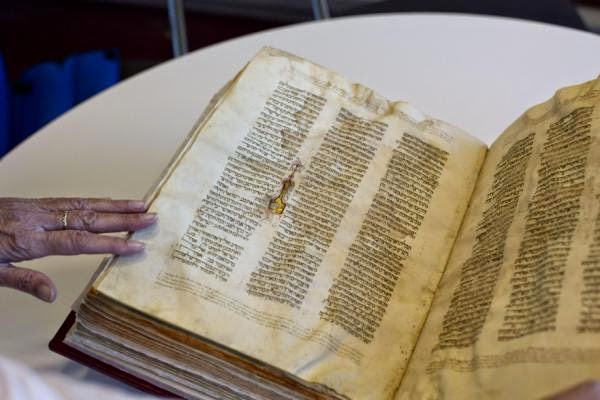 According to the proposal, the bibles would remain in climate-controlled conditions in the library and Damascus Jewish immigrants in Israel would be partly responsible for overseeing their safekeeping. The Damascus Jewry Organization in Israel, the main group representing Damascus immigrants, supports the library's initiative.

However the man who helped organize the operation to transport the holy books into Israel, Rabbi Avraham Hamra, opposes the library's proposal. Hamra is not connected to the Damascus Jewry Organization, and says he may challenge the decision in court. The rabbi argues the bibles are Syrian Jewish cultural property, and that the library had promised to transfer them to a Syrian Jewish heritage center in Israel he plans to build.

Eight of the ancient bibles were smuggled in to Israel between 1993 and 1995 in a covert operation by Israel's Mossad spy agency and the ninth was smuggled out of Syria in 1993 with the help of a Canadian Jewish activist.

Details of the Mossad operation remain classified, but Shabtai Shavit, the Mossad director at the time confirmed that Hamra, the then-leader of the Damascus Jewish community who now lives in Israel, helped to organize the operation.

A catalog from an exhibition in 2000 calls the manuscripts the "religious and spiritual treasure of the Syrian Jewish community" and says the Israeli library would safeguard them "until the establishment of a Syrian Jewish heritage center in Israel."

However the center has not yet been built, and the library denies it ever promised him the manuscripts. While the library has asked Hamra to be a member of the proposed steering committee involved with the safekeeping of the bibles, he declined their offer.

"It is not my property, but it is the property of my community," Hamra said.

Israel Hayom and AP (with thanks: Lily)
Posted by bataween at Wednesday, December 10, 2014

It is well reported that Rabbi Hamra is much detested by the Syrian Jewish community in Israel and resides predominantly in Brooklyn. His motivation is that of an alternative Syrian cultural centre: the subject of an ugly, fierce and heavily personalised debate. Within other circles it has been very difficult to address what are at best "sectarian" attitudes to heritage. The 10, 000 plus Syrian photographs held by the Sephardic Heritage Museum project (NY) which have not been made available to the public is a case in point. Fundamentally the Damascus Keterim are part of a broader artistic Sephardi tradition - they were not produced in Syria- and deserve the care and attention they receive at the National Library. A Blitz

the National Library has the facilities to preserve old books and manuscripts -- probably better than any other institution in Israel.

The Shrine of the Book, part of the Israel Museum, also has such facilities.