What are Yiddish actors doing in Cairo? 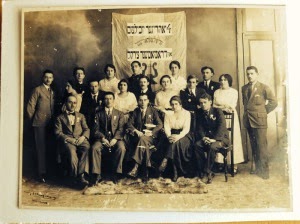 A photograph bought on Ebay sheds light on a remarkable phenomenon: a Yiddish theatre group in Cairo in 1916. Yes, Cairo. David Mazower blogs on the Digital Yiddish Theater Project:

Who are these smartly-dressed young men and women? And why are they all wearing white ribbons? We can sense a certain earnestness and a strong sense of pride in their carefully posed ranks. But with no names, dates or inscription on the back on the photo, what can we learn from it?

So what’s a group like this doing in Cairo?

Cairo’s large and well-integrated Jewish community was mainly Arabic and French speaking in the late 19th and early 20th centuries. But, just as in Constantinople and Baghdad, from at least the mid 19th century onwards there was also a constant presence of Ashkenazi Jews – workers, artisans, traders and professionals. Their main languages would have been Yiddish, Russian and Polish. (And of course many people in both groups would also have had some proficiency in Hebrew).

Cairo’s secular Jewish cultural products – its songs, theatre, literature and journals – were thus a complex hybrid of overlapping languages and subcultures, connected both to the popular culture of the Arab street but also to high society and the elites. Within this melting-pot, Yiddish culture also gained a foothold by the early 20th century.

In the Yiddish language, yudish (an alternative spelling of yidish) can mean both Jewish and Yiddish, and our Circle is in fact a Yiddish amateur dramatic society.  For more on its history, we can follow in the footsteps of one of the finest historians of modern Yiddish (and a pioneer of digital Yiddish scholarship), the late Leonard Prager. Omnivorously curious about global Yiddish culture, Prager wrote an article in 1992 titled “Yiddish Theatre in Cairo”, based on a small archive he found in the YIVO Institute in New York.

His article includes a grainy image of the man sitting proudly in the front centre of our photograph, Joseph Weinstein, described as “an attorney with a deep attachment to Yiddish culture [who] founded the group and directed most of its performances…Odessa-born and formerly resident in Palestine, he was the key personality in the Ashkenazic community’s dramatic and radio activities.”

Prager also reveals that the Circle held a memorial meeting on 10 September 1916 to mark the recent passing of the revered classic Yiddish writers Y L Peretz (1852-1915) and Sholem Aleichem (1859 – 1916). We can therefore assume that our photograph was taken at this gathering, which would also explain the white memorial ribbons worn by all twelve men and seven women.

Cairo’s Yiddish theatre enthusiasts were part of a worldwide trend for Yiddish amateur dramatics. Similar groups sprang up from Shanghai and Baku to Montreal and Geneva, and right across the Yiddish-speaking heartlands of central and eastern Europe and the Americas. Inspired by the new art theatre repertoire of the Yiddish stage from Jacob Gordin onwards, they typically flourished from the 1900s to the 1930s. (...)


The Cairo Jewish Dramatic Circle lasted until at least 1948, when the war between Israel and its neighbours transformed the fortunes of the city’s Jewish community.  According to Leonard Prager, the Circle maintained an extensive archive of its meetings and performances at its club rooms in the  same building as the Ashkenazi Synagogue, but all these records were destroyed in a fire on 2 November 1945.

Read article in full
Posted by bataween at Thursday, December 18, 2014

as far as I know, the oldest known documents/manuscripts in Yiddish were found in the Cairo Genizah. They were from the 13th and 14th centuries, as I recall.

there is even a book about these documents.

one thing I learned from a Yiddish aunt:
kissen mein toukes
And I still use it today
sultana

so a fire destroyed the records of this theater group that were in the Ashkenazi synagogue in 1945. Pray tell, just how was this fire caused? Was it man-made? Was it part of a pogrom against Jews in Cairo?

you are quite right Eliyahu to point out that this was no random incident but a deliberate act, , to burn down the Ashkenazi synagogue as part of a pogrom.