Sixty-seven years since the Aden pogrom

It is 67 years since a brutal anti-Jewish pogrom broke out in the British protectorate of Aden. As in similar situations the colonial authority (Britain in Iraq and Libya and the French in the Maghreb) did not exactly rush to the Jews' aid.

The above video (Hebrew - with thanks Dani) contains a survivor's account of the December 1947 Aden pogrom. There was every sign that the pogrom was pre-planned. The mob followed the interviewee, a boy who was sent home from school, into the Jewish quarter. The survivor later wrote of his experiences in letters to a relative in Israel. Eight-two Jews died in the most gruesome way, babies were set on fire and boys' bodies cut up into small pieces.

Below is a first-hand account of the events, in a letter to the Jewish Chronicle (published in the issue of 2 January 1948) by a Jew signing himself "An Adenite"(via Daphne Anson):

"The first day of the three-day Arab strike against partition, on December 2, passed off quietly, despite a demonstration outside the Jewish quarter [in Crater]. On the evening of that day, a meeting was addressed by Arab leaders, and at 6 p.m. the crowd, followed by thousands of Arabs, attacked the Jewish quarter. Those of us who were in the streets had to take shelter in the nearest house. This lasted up to about 10.30 p.m., when some British sailors surrounded the Jewish quarter and dispersed the mob.

"Next morning, since Aden Protectorate Levies (Moslem Troops) were stationed in the Jewish quarter, many [Jews]came out on the streets, trusting that peace and order would be maintained. Suddenly, news reached us that Jewish shops situated in the leading bazaars were being looted. 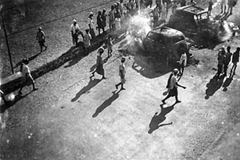 "Eyewitnesses saw Arabs fire buildings under the eyes of the Levies. They also saw Indian merchants openly abstracting bales of textiles from godowns [warehouses] in the Jewish quarter.

"Following that, many houses were burned, as well as a synagogue. The reason that very few lives were lost in them was due solely to the fact that the inhabitants had fled. At least one-third of the Jewish quarter was destroyed, looted, or devastated.

"In many of the houses, mobs broke in, looting and beating the inhabitants, and in some cases threatened them with death if they did not "accept the Mohammedan religion." Some were kidnapped by Arabs, and five are still missing.

"Jewish deaths total 74, including men, women, and children. Many others were wounded. The only ones killed by the Arabs were one man slaughtered by rioters, and probably a few more by looters, in their homes. The Levies were reponsible for nearly all the deaths because of their constant shooting at our homes....

"An amazing allegation is contained in a cable dispatched by the Governor himself [Sir Reginald Stuart Champion] to the Secretary of State [for the Colonies, Arthur Creech Jones], on December 5. It reads: "Curfew retained in Crater and situation there generally quieter, but alleged hostile activity of Jews created new dangerous tension, especially after killing of a Levy and an Indian Moslem Government doctor almost certainly by Jewish snipers ...."

"I can hasten to assure His Excellency and the Governor that this allegation is completely untrue. The doctor in question is well known to the Jews as a kindly man and as a particular friend of a Jew called Mori Dawood. The real facts are that one of the sons, named Yehia, was shot on Wednesday, in his own home by the Levies. His family risked their lives under fire to reach a Jewish house where a telephne was available for the purpose of arranging for an ambulance to take Yehia to hospital and also telephoned the Audit Officer in whose office one of the sons is a clerk. All the replies were "Busy" and "Wait."

"It was only the next morning that the doctor came and removed Yehia to the ambulance while he was speaking to his brother Hayeem near the house, the Levies shot them both. The doctor died instantly and Hayeem is still under treatment for wounds. Yehia died later in hospital. 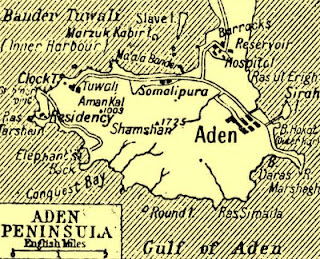 "What is needed is an impartial inquiry. I declare bluntly that the attack upon us was organised beforehand. How else can one account for an all-round attack, not only in the Crater, but also in Tawahi, Shaikh Othman, and Maalla? It was in the Crater that the events already described took place. But in Tawahi, a port six miles from the Crater, the total number of Jewish steps is five.

"In Shaikh Othman [just off this map, to the north], about eleven miles from the Crater, 14 Jews were killed, and about 900 have been evacuated by the Government to the Yemenite migration camp at Hashed [i.e. Hashid]. In Maalla, a port, there are no Jewish residents, but premises stored with Jewish goods were looted.

"It would be useful to know where the millions of lakhs of loot are at present, or whether the Government is taking drastic action to find the looters. But we hear that Arabs are selling their loot at a fifth to a tenth of its value, and that much of it has already removed from the Colony to the interior, despite the police "barriers".

"Aden's stricken Jewry expects more than a mere condolence from world Jewry. They require funds to reconstruct their livelihood, and legal aid for a full inquiry and defence of their rights under International Law. They also require the particular attention of the Jewish Agency for migration certificates to Palestine for the whole community as soon as possible ...."

In the immediate aftermath of the pogrom in Aden, Elie Eliachar, president of the 160,000-strong Sephardi Community of Palestine, who was visiting London, reported that the number of Jewish fatalities might in actuality have been as high as 145. He noted that Yemeni refugees in the Shaikh (or Sheikh) Othman camp, awaiting removal to Eretz Yisrael, had also suffered greatly from Arab attacks, and many feared that the the British government would repatriate them to Yemen.
Posted by bataween at Wednesday, December 10, 2014

The Arab Muslims and their western sycophants are always complaining about Israel allegedly doing "collective punishment" to the Arabs. However, this case of persecution of the Jews in Aden because the UN General Assembly had recommended partitioning the Land of Israel into a Jewish state, an Arab state plus an international enclave [corpus separatum], demonstrates the Muslim principle of the collective guilt of Kufar, of non-Muslims. The Aden Jews had to be punished because Jews elsewhere received the recommendation of a state from the UN GA.

Lots of Europeans do not even know that there was a UN vote.
All they know is that "the Jews" stole Arab land.And now with the death of a Palestinian leader during a demonstration,we shall see lots and lots of horrors!
sultana

the death of the Fatah leader, who once planted a bomb in Tiberias that killed two boys, is wrongly blamed on Israel. See link: