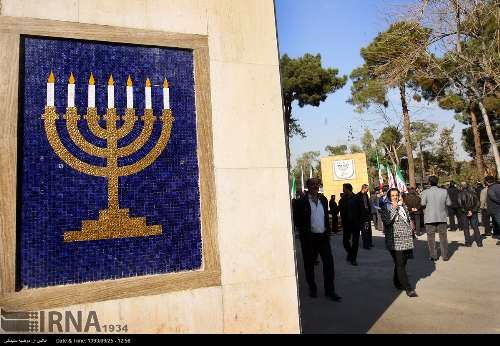 Why did Iran this week unveil a monument to Jewish soldiers killed in the Iran-Iraq War, which lasted from 1980 to 1988 and saw both countries suffer millions of casualties and billions of dollars in damage? Numbers of dead Jewish soldiers are estimated at 150, a drop in the ocean. The regime has two objectives: to show that it is moderate and reasonable - that the US can do business with Iran in its nuclear talks; and to emphasise the Jews' unswerving loyalty to their country.  Haaretz/AP reports:

Jewish community leaders and a number of Iranian religious officials took part in the ceremony on Monday, according to Maariv's website, NRG.

Photographs from the ceremony were published on the websites of Iranian news agencies IRNA and Tasnim, showing banners featuring images of the fallen Jewish troops, called "martyrs," and wreaths placed alongside the monument, which includes a Hebrew inscription reading "Peace forever."

Other images show religious figures laying wreaths at the soldiers' graves and attendees of the ceremony praying together.

The vice speaker of Iran's parliament attended the ceremony, where he praised the Jewish community for supporting the government.

“The explicit stances of the Jewish community in supporting the Islamic Republic’s establishment and their obedience to the Supreme Leader of the [Islamic] Revolution demonstrate the bonds originating from the teachings of the divine religions,” Mohammad Hassan Aboutorabi-Fard said on Monday, according to Tasnim news agency.

He also praised the Jewish community for denouncing U.S. demands on Iran and the "violent and inhumane" behavior of Prime Minister Benjamin Netanyahu.

Iran, a home for Jews for more than 3,000 years, has the Middle East’s largest Jewish population outside of Israel. ( But while Iran’s Jews in recent years had their faith continually criticized by the country’s previous governments, they’ve found new acceptance under moderate President Hassan Rouhani.

Fighting for Iraq in the Iran-Iraq war
Posted by bataween at Friday, December 19, 2014

Every Nazi-like regime from Emperor Titus down to today has always erected monument or museum to the Jews it exterminated.