Here's a nice story of brotherhood and good cheer in the Algemeiner, picked up  from the Saudi-funded online news medium Elaph: a Kurdish writer, Mahdi Majid Abdullah, praises the  Jews for their 'values and principles'. 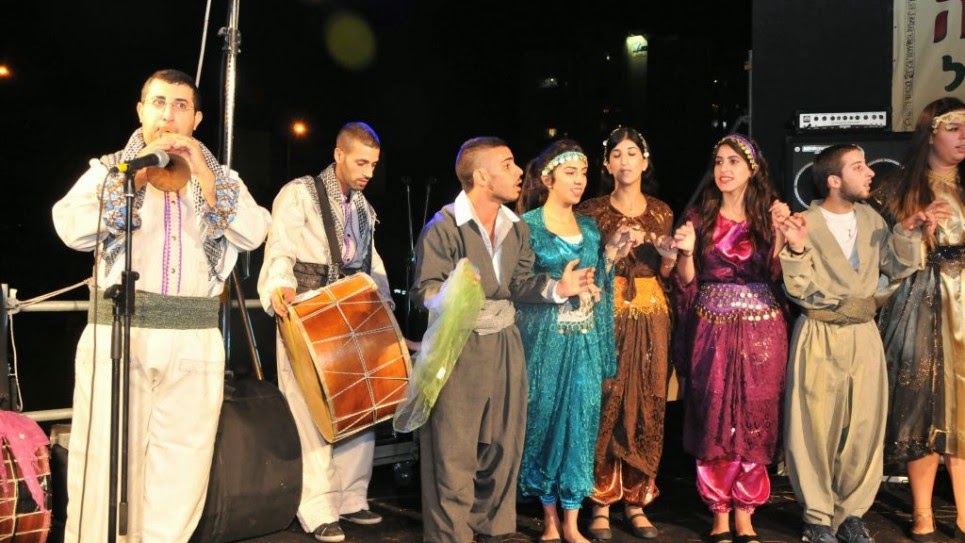 The Saharane Kurdish music and dance festival in Israel

“I personally learned from the Jews that it is no exaggeration to say that ‘if you want to live a happy life, then be like the Jews.’” So says the Kurdish writer Mahdi Majid Abdullah in a remarkable oped published in the liberal Arab daily Elaph.

Based in London, Elaph bills itself as the Arab world’s only independent newspaper, with a particular accent on liberal and democratic causes. The paper has tussled with several Arab regimes in the past, including those in Saudi Arabia and Yemen.

The paper is, therefore, no stranger to controversy. But Abdullah’s article is likely to cause a stir regardless, and not only because the author is a member of the one Middle Eastern nation, the Kurds, with whom Jews have always enjoyed warm relations. His views directly challenge the prevailing climate of hostility and prejudice towards Jews across the region.

“When I came to the European country where I live, I settled in the city inhabited by a large number of Jews and I got to know a Jewish family and which strengthened my relationship with other Jewish writers and journalists,” Abdullah wrote.

"Jewish families teach children from a young age on the proper goals and values ​​and principles, which instill confidence and facilitate the way for him and fueled by tenderness and kindness and to make him know how to walk in the path of his life, so the Jew does not see failure in his life. Where Jews entered a city or a country they dominated them culturally and intellectually, politically and economically for the greater good at this place. There is no need to list many examples; just to know that the United States and Europe are successful was because of the Jews who have lived there, and in the eastern countries if we go back to the history books, we find the Arab and Islamic countries were living in affluence in all respects when the Jews inhabited them.

"In European countries do not see the young Jew interested in meaningless things, while the young Muslim and Christian is interested in pursuing football supporting his club or national team, or gasping behind drinks and pursuing girls in the bars and nightclubs or on the streets. You find a Jew interested in the study or the economy or in the goal of particular benefit to himself and others. Of course, there are also creative and responsible Muslims and Christians, but compared with the Jews their proportions are negligible."

By the same author (via MEMRI - with thanks: Ranbir; Lily)