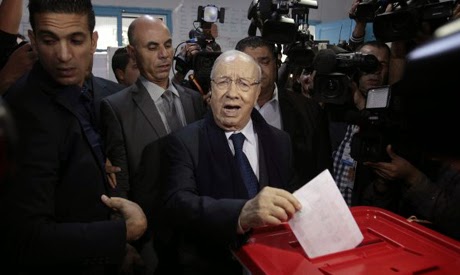 Ahead of the second round of Tunisia’s presidential elections, the head of the country’s Jewish community endorsed the campaign of secularist hopeful Beji Caid Essebsi, reports The Forward:

Joseph Roger Bismuth, president of the Jewish Community of Tunisia, or CJT, gave Essebsi his support in an interview published Thursday by the news site AfricanManager.com ahead of the Dec. 21 vote.

He is quoted as saying that Essebssi will win the election because “he has worked for a long time for Tunisia and he has many contacts and relations that allow him to work better” than other candidates.

In an interview for the news site earlier this week, René Trabelsi, who heads the Jewish community of Djerba, also endorsed the campaign of Essebsi, who is the leader of the secularist Nidaa Tounes. In October’s parliamentary elections, his party emerged as the country’s largest after it won 86 seats of the Tunisian parliament’s 217.

Bismuth also said that the Islamic Ennahdha party, which after the elections became the country’s second largest, “will complement the next government, and this will serve socio-political stability” in Tunisia.


Read article in full
Posted by bataween at Saturday, December 20, 2014

Speaking of election, the coming Israeli election could be a game-changer as far as Sephardi Jews are concerned.