Many Turkish Jews are leaving the country after increased threats and attacks, a prominent businessman from the community has written in the Istanbul-based Jewish newspaper Şalom. What's more, Jews do not have confidence in the ability of Turkish law or civil society to protect them :(with thanks: Eliyahu) 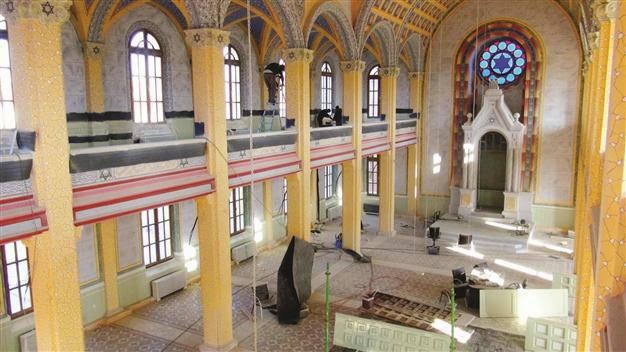 An Edirne synagogue, now under restoration, was the centre of a controversy when the province governor said it should only ever become a museum in response to Israel's actions

“We face threats, attacks and harassment every day. Hope is fading. Is it necessary for a ‘Hrant among us’ to be shot in order for the government, the opposition, civil society, our neighbors and jurists to see this?” Mois Gabay wrote on Dec. 10, referring to the murder of Armenian-Turkish journalist Hrant Dink in 2007.

Gabay, a professional in the tourism industry, added that increasing numbers of Turkish Jews are making plans to move abroad with their families, feeling unsafe and under pressure in the country.

“Around 37 percent of high school graduates from the Jewish community in Turkey prefer to go abroad for higher education ... This number doubled this year compared to the previous years,” he wrote.

It is not only students, who have begun to think about building a life abroad for their families and children, but also young businesspeople  according to Gabay.

“Last week, when I was talking to two of my friends on separate occasions, the conversation turned to our search for another country to move to. That is to say, my generation is also thinking more about leaving this country,” he wrote.

Gabay’s column came a few days after verbal attacks on the Neve Shalom Synagogue in Istanbul's Beyoğlu district, which has been attacked with explosives on three previous occasions in 1986, 1992 and 2003. A paper reading “to be demolished” was placed on the entrance of the synagogue by an unknown group two weeks ago. Later, the Alperen Ocakları, the youth group of the ultranationalist Great Union Party (BBP), attempted to march to the synagogue as a part of a protest.

In a recent interview with Radikal, Gabay also said changes in the law and the recognition of hate crimes in the Turkish penal code are not sufficient for the protection of Turkey's Jewish community.

“The laws have changed. Hate speech is now a crime, but when is a lawsuit ever opened over hate speech against our community? I don't blame the government alone for this. The opposition, civil society, unions and the democratic public sphere should be a shield for us. They should monitor these incidents. Are they waiting for the shooting of a Hrant among us?” he said, adding that daily threats have increased due to the widespread use of social media in Turkey.