'Grandfather was convicted of being Jewish' 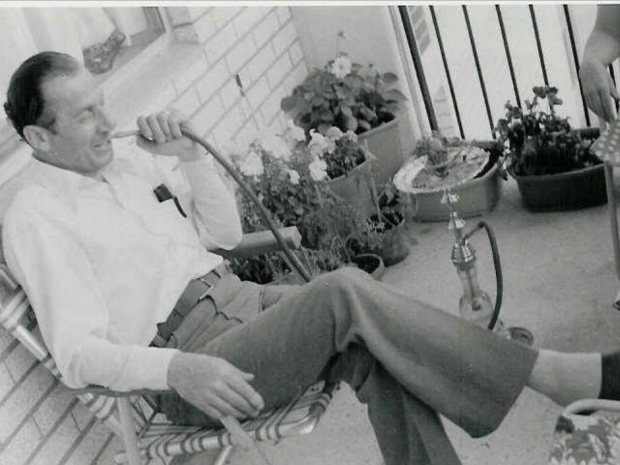 Joseph Esses. Click here to see the moving documentary Michelle Kahn made of her grandfather.

It began as a class project, but today it is a moving hour-long documentary of the life and times of a Syrian Jew. The film-maker is his grand-daughter, Michelle Devorah Kahn. Here is her story, as told to the Canadian National Post on the occasion of the Remembrance Day for Jewish Refugees from Arab countries on 30 November.

All it took to get from one end of the room to the other was a slight step forward. Every couple hours, a man would walk by his cell and spit on him. There was no food. There was no water. There was no light. There were no comforting words, only brief moments when hopeful thoughts would fleetingly pop into his head. From 1948 to 1950, my grandfather had one job: He was a prisoner; a convicted Jew.

Joseph Avraham Esses was born on Oct. 16, 1919, in Aleppo, Syria. His father was a textile merchant and he was the eighth of 14 children. Although he enjoyed a happy childhood — filled with love, laughter and an abundance of Baklava — living side-by side with his Muslim Arab neighbours, things would take a turn for the worse. This was the point in his life he never spoke about; the point I was most curious about.

So in 2007, for a class project, I set up two chairs, directed a camera at my grandfather and interviewed him. My grandfather was a very closed and cautious man at the time, and after much debating and negotiating with him, I began to understand why.

He explained to me that as the end of the 1940s approached, everything changed and the attitude towards the Jewish people, who were once the “brothers and sisters” of the Muslim Arabs, shifted greatly. At the time of the establishment of the State of Israel, my grandfather, then a young adult, owned and managed his own shop, selling clothing and incidentals (perfume, cologne, accessories, etc.).
One evening, after closing up his shop, he was walking home when three young Muslim men cornered him in the middle of the street and began beating him with their fists and whatever pathetic weapons they had (sticks, rocks, etc.) and shouting, “You want a country? You want a country?! Here is your country!”

Along with the entire Jewish community of Aleppo, he witnessed many atrocities. Friends and family members often disappeared, never to be heard from or seen again, or were slaughtered during broad daylight for all to see. One incident involving a Jewish family man who was hiding from the Muslims, lead to his three young daughters being kidnapped from the marketplace and held captive for days, where they were tortured and ultimately killed. A few days later, their cut-up bodies were delivered to the family’s home and left on their doorstep in a sack.

Being Jewish became a crime and my grandfather was convicted of it. Men, women and children were often hung for this crime in the town square, as the Arabs cheered. My grandfather was luckier than most.

He had established strong, positive relationships with both the Arabs and Jews over the years (professionally and socially), and boasted about having the son of Syria’s chief of police as his best friend. But, at the risk of appearing disloyal, everyone had no choice but to put aside their personal feelings for political ones.

So my grandfather was allowed to live, but he was thrown in jail. Many were left in there for days on end, starved, tortured and belittled, and left to stand in dirt and feces. Even luckier for him was that his relationship with the Arabs secured him a nightly release, but each morning he was put back into that same jail cell.
Never knowing if things would improve, or if they would continue to worsen, his family had no choice but to leave. Slowly, he began securing the escape of his younger siblings and his dear mother.

One night, being the final family member left, Joseph turned on all the house lights, left the radio at full blast, unlocked the front door and left forever. He escaped across the border into Lebanon with a fake passport, which listed his birthplace as Philadelphia. He left behind all his cherished family heirlooms, belongings, money and memories. When he crossed the border safely into Lebanon, he ran out from the vehicle, kissed the ground and began singing a song of freedom.

This was not an easy interview for me to sit through. It was the first, and maybe the only, time he had ever spoken about this in his life. Most of my family didn’t know what I did. I knew he was in pain and I knew he was afraid of people knowing the truth. But I also knew I had a duty to my ancestors and my heritage to learn what really happened. I began interviewing other family members and gathering stories and photos. In the end, I had a full-length documentary on my grandfather’s life titled, Wanted: The Joseph Esses Story.