It is said that any resemblance between Ridley Scott's new biblical epic and the Bible story is purely coincidental - but the suggestion that the Jews built the pyramids is too much for Arab states to take, among other things. (I wonder what Arab states would have said about the Cecil B de Mille version?). The Guardian reports: 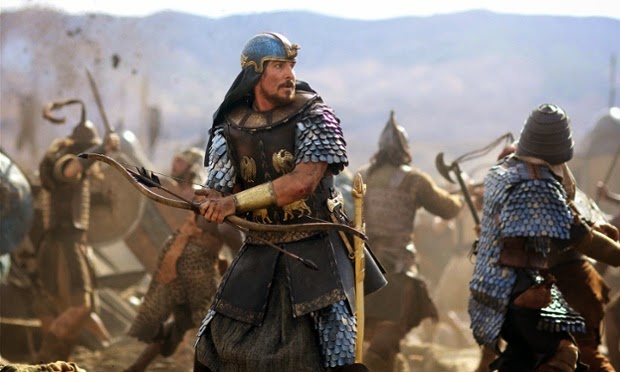 A scene from Exodus: Gods and Kings

Egypt has banned the Hollywood biblical epic Exodus: Gods and Kings, citing historical inaccuracies, the culture minister said on Friday. The decision comes a day after a similar move by Morocco.

The film, directed by Ridley Scott and starring Christian Bale, relates how Moses helped Israelite slaves flee persecution in Egypt under the Pharaoh Ramses by parting the Red Sea to let them cross safely. The Egyptian culture minister, Gaber Asfour, said the film was rife with mistakes, including an apparent claim that “Moses and the Jews built the pyramids”.

“It is a Zionist film,” he said. “It gives a Zionist view of history and contains historical inaccuracies and that’s why we have decided to ban it.”

Morocco has also banned the film, despite it having been approved by the state-run Moroccan Cinema Centre, media reported on Thursday, quoting theatre managers. Hassan Belkady, who runs Cinema Rif in Casablanca, told media24 news website that he had been threatened with the closure of his business if he ignored the ban.
“They phoned and threatened they would shut down the theatre if I did not take the film off the schedule,” Belkady said.