Critics at a loss when truth unfurled

The fight-back on campus begins: Mendy, son of Rabbi Shmuley Boteach, unfurled a banner advertising 856,000 Jewish refugees from Arab lands at a meeting of Justice for Jews for Palestinians at New York university, his proud father tells us in The Jerusalem Post. The opposition were lost for words: (with thanks: Michelle) 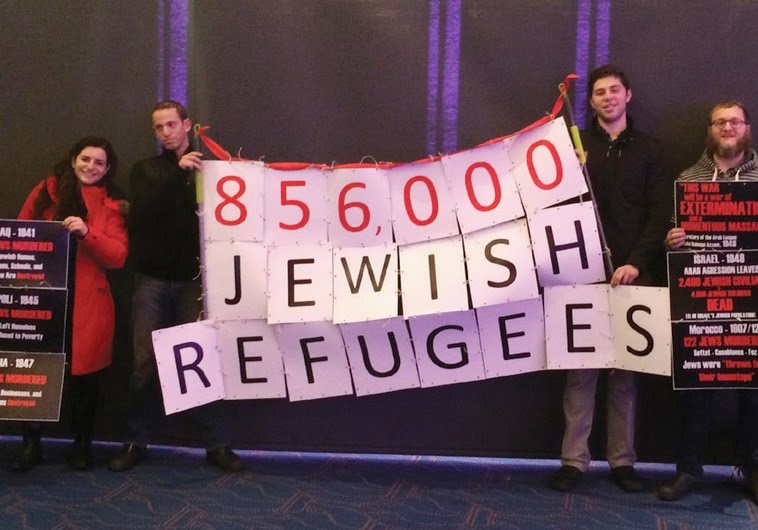 On Wednesday night, my son Mendy held a demonstration inside an event held by the Students for Justice in Palestine at New York University. They were screening a documentary by Israeli filmmaker (or should I say anti-Israeli filmmaker) Lia Tarachansky, called On the Side of the Road. The description of the film: “This is the story of those who fought to erase Palestine and created an Israeli Landscape of Denial.” The event sought to smear Israel’s name by placing the Palestinian refugee crisis in a vacuum, showing only cruel Israeli militias single-handedly forcing the native population out of its homeland.

My son sought to show the other side of the story. While there were indeed hundreds of thousands of Palestinian refugees, there were even more Jewish refugees driven from Arab lands and Iran beginning at the same time. The number of these refugees amounted to 850,000 Jews. My son and his fellow students held 6-foot signs displaying this number. These refugees fled their countries due to the fierce anti-Semitic atmosphere that had begun to envelop them. In the 1940s, and especially after 1948, pogroms were set against the Jews of the Middle East, with hundreds killed. In Iraq in 1941, 180 Jews were murdered, with 900 Jewish homes, schools, businesses and synagogues destroyed.

These killings were not carried out by armies, but by enraged civilian populations who stormed the Jewish areas of their cities.

Rabbi Boteahh should have added that Jews in Arab/Muslim lands were oppressed and humiliated long before 1948, long before the 20th century. This oppression was carried out according to Islamic teachings, starting with Quran 9:29. The system of oppression was eventually worked out in detail and called dhimma.

Good for young Boteahh and his friends. But the ignorant American students have to learn about dhimma too.

there is a problem in the numbres.
hitler caught in europe 6 million
jews to kill and this was not a
total destruktion of
europ jews.

how can it be that in the whole
middle east the numbre of
jews in total was just
around 1 million.

sephardic jews are proud and the
elder ones do not like to
talk about things they
feel ashamed of.

ask them, one day they will go
and there will bo no one
to ask.

off topic//
Arab-Nazi collaboration and the death of Alois Brunner.

Congratulations to Ms. Boteach. Not that the anti-Semitic organizations really care, but I'm glad to see that someone is finally fighting back. Now if she would only bring to people's attention, the story of the thousands of PALESTINIAN Jewish refugees.

see link for comments on population expulsions in Arab lands