Update:  the phrase 'Bahrain Jews wield significant power' has raised a few eyebrows. Is it antisemitic?

In fact the Bahraini Jews do wield power, although how significant is a matter of debate.

Besides the former Bahraini ambassador to the US, businesswoman Houda Nonoo, Nancy Khedouri sits in the upper house of the Bahrain parliament and is deputy chairwoman of the foreign affairs, defence and national security committee. Ebrahim Daoud Nonoo, another former member of parliament, is now a leading Bahraini businessman. He’s working with Minister of Culture Shaikha Mai Bint Mohammad Al Khalifa to renovate the Manama synagogue.

****************
After years of institutional silence, the BBC's new-found interest in the Jews of the Middle East is to be welcomed*. In fact, this story originated on the British Library website some six months ago. The article almost admits that persecution 'after the creation of Israel' was a key factor in the Jewish exodus from the Gulf, but then gives evidence that the communities of Iran and Bahrain suffered 'racist attacks' well beforehand. (With thanks to all those who emailed me).

The Jews may have originated in the Middle East but they were long ago scattered far and wide - to the Gulf, among other places. Few now remain, except in Iran. But a century ago, writes Matthew Teller, there was even a proposal to found a Jewish state at an oasis near Bahrain.

In 1859 Griffith Jenkins, a senior British naval officer in the Gulf, wrote to a subordinate named Hiskal.

Hiskal - or Yehezkel - ben Yosef was a minor official representing British interests in Muscat. And, like his predecessor in the post in the 1840s (a man named Reuben), he was Jewish.

Jews had been living in Muscat since at least 1625. In 1673, according to one traveller, a synagogue was being built, implying permanence. British officer James Wellsted also noted the existence of a Jewish community on a visit in the 1830s.

Jenkins's letter talks obliquely about the Imam (a Muslim ruler who held sway in Oman's interior) and the arrival of a man from Persia. He ends by asking Hiskal to explain the matter in private - and then, remarkably, had his letter translated into Hebrew. 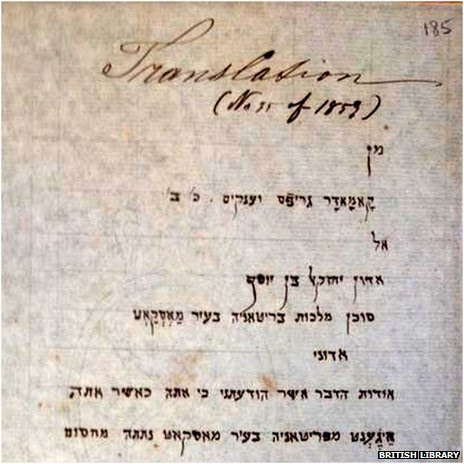 British Library curator Daniel Lowe, who unearthed the letter recently, is flummoxed. With Arabic in daily use, and Hiskal doubtless able to read English, why would Jenkins communicate in Hebrew?

Lowe guesses that he may have been using Hebrew as a secret code, to be understood by Hiskal but not by messengers - and, perhaps crucially, not by the Imam and the "man from Persia". 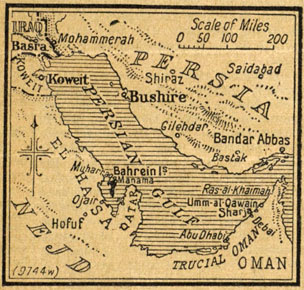 But if this remains a mystery, it's well-known that Jews once lived all across Arabia.

The Koran records Jewish tribes in and around Medina in the 7th Century, and the medieval traveller Benjamin of Tudela, who passed through in about 1170, describes sizeable Jewish populations throughout modern-day Iran, Iraq and Saudi Arabia, as well as on both shores of the Gulf - at Kish (Iran) and Qatif (Saudi Arabia).

Baghdad had been home to Jews since the 6th Century BC. Around the time of WW1, officials estimated the city's Jews to number between 55,000 and 80,000, in a total population of 200,000 - a proportion equal to or greater than that in centres of European Jewry such as Warsaw or Berlin.
Today, fewer than 10 individuals remain.

For a combination of reasons including economic migration, political pressure and outright persecution - notably after the State of Israel was declared in 1948 - almost all the Jewish communities of the Gulf countries dwindled to nothing in the 20th Century.

Two survive. In Iran perhaps 25,000 Jews remain, while Bahrain has a tiny Jewish minority, comprising only a few families - though they wield significant power. Until last year, Bahrain's ambassador to the US was a Jewish woman, Houda Nonoo.

Neither community, though, has had an easy time. Racist attacks were being recorded by the British in Iran in 1905 and in Bahrain in 1929.
Meanwhile, British diplomat John Gordon Lorimer hints at tensions caused by Jewish businessmen in Kuwait, who distilled "spirituous liquors" and thus enabled local Muslims to break religious laws.

In 1917 an outlandish plan was floated to use Bahrain as the bridgehead from which to establish a "Jewish State of Eastern Arabia" in the desert nearby, but it came to nothing. Just weeks afterwards British Foreign Secretary Arthur Balfour gave his support to the idea of establishing a "national home for the Jewish people" in Palestine.

*The following addition to the BBC timeline on Israel (with thanks: Ian) has been noted: 1949-1950s - About a million Jewish refugees from Arab countries, plus 250,000 Holocaust survivors, settle in Israel. (In fact the true figure was 650, 000 but we are not complaining - ed)

The Jewish cemetery in  Saudi Arabia

Email ThisBlogThis!Share to TwitterShare to FacebookShare to Pinterest
Labels: Jews of Bahrain, Jews of Iran, Jews of Iraq, Jews of Kuwait, Media bias