'We were uprooted, and so was our history' 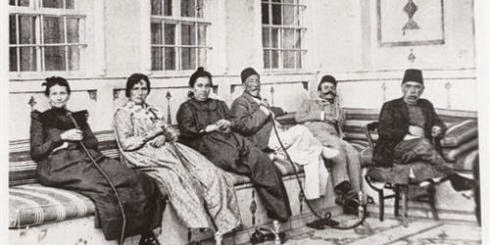 A Syrian Jewish family at the turn of the century, smoking narghile

"Jews from Arab lands suffered - their story should be told. They weren't just uprooted; their history was uprooted."

So says Florette Hyman, who was born Florette Menir in Cairo, and who came to the UK in 1957 after her family was forced to leave Egypt.

"Everyone is talking about the Palestinian refugees. I feel that no one has asked the question: What about the Jews from Arab lands?" she said.

Until now, there has been no official date to mark the mass exodus of Jews who abandoned their homes and businesses in the face of increasing persecution in Arab countries after the state of Israel was established in 1948.

Over 870,000 Jewish refugees were driven out of Arab countries and sought sanctuary around the world, including in the UK where they make up just under five per cent of British Jewry.

This year, the Knesset in Israel passed a bill designating November 30 as the official day to commemorate the stories of Jews who fled Arab countries such as Iraq, Egypt, Syria, as well as Iran.

Some of the refugees have campaigned for restitution, hoping to regain the property or value of the capital lost at the time of displacement. Others just want to be heard.

Mrs Hyman, now 64, was eight-years-old when she left Egypt for Britain. Along with her parents and five siblings, she lived in one-room in a refugee camp near Leeds. Her father Abraham, grateful for the "haven", wrote a letter of thanks to the Queen and named his youngest daughter Elizabeth after her.

"I'm quite emotional talking about it now," Mrs Hyman said. "When Israel was created, it was dangerous for Jewish people to go out at night in Egypt; they would disappear.

"I remember a policeman coming into our house with papers on a Friday night, saying we had to leave. My father's family had been in Egypt since the 12th century.

"Everything we had was taken away from us - my father's packing company was taken away. They made roads out of the tombstones in Jewish cemeteries. I can't even go back and visit my grandfather's grave." In 1948, more than 80,000 Jews lived in Egypt - now, there are fewer than 15.

Roger Bilboul attended the Jewish Lycée de l'Union Juive school in Alexandria before leaving, aged 18, in 1959. He has backed an international campaign to regain access to Jewish archives left in Egypt.

"I left because of the situation, it wasn't good for Jews," recalled Mr Bilboul, who now lives in London.

"People were being put in prison all the time with no excuse. There was the nationalisation of Jewish businesses, a lot of stuff was confiscated and left behind. Some people are now going through the courts to try and get back their property.

"The contribution that Jews made has been largely forgotten; but it's something Egyptians themselves are now keen to put on the map."

Moshe Kahtan, whose father Saleh was a legal adviser to the Iraqi Ministry of Finance, also regrets that the contribution made by Jews has been forgotten. He dismisses the prospect of restitution as "wishful thinking".

"Freedom," he said. "You better forget this word in that place - it didn't exist for Jews.

"At its peak, half of the population in Baghdad was Jewish. In the 1930s, they started relieving Jews of their positions… they were imitating what was happening in Nazi Germany. Jobs were taken over by Muslims. Jews had a yellow identity card - they confiscated my passport."

Read article in full
Posted by bataween at Sunday, November 30, 2014

LET US BE FAIR TO eGYYP THEY PERSECUTED US BUT NEVER SENT US TO GAS CHAMBERS....aND TODAY i AM THANKFUL FOR THAT PERSECUTION BECA1USE I Am LIVING IN A FREE COUBNTRY WHERE I CAB WEAR MY RELIGIOUS SYMBOLS AND NO ONE CAN SPIT ON ME OR THREATEN LME WITH THROAT SLITTING MOVEMENTS CRYING OUT / TOMORRO YOUR TURN WILL COME
SULTANA