Was Moshe forced to leave Morocco?

It's a touching story of loyalty and friendship between Muslims and Jews: Lahcen (pictured), promised his friend Moshe to care for his ancestral graves. Most interesting  perhaps are the comments below this Morocco World News article, objecting to the phrase 'Moshe was forced to leave Morocco for Israel'. 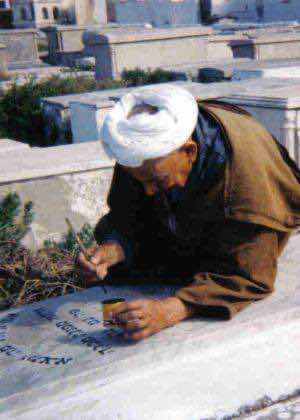 According to Mr. Omar Louzi, President of the Rabat Business Club, Lahcen promised to honor the request, loyal to the friendship he had with his Jewish friends. For more than 60 years, at the beginning of each year, Lahcen has been cleaning the graves of the ancestors of his Jewish friend.


Despite his meager resources, Mr. Louzi said that at the beginning of each year, Lahcen bought a small box with black paint and re-writes the names originally written on the graves in Hebrew. What is amazing about Lahcen’s loyalty is that he honored the request, while he never been to school.

Now, despite his old age, Lahcen is adamant about keeping his promise. According to Mr. Louzi, “when someone dares to say that “it is now old, and he has already done enough to honor his promise”, he gets angry, and answers, “A promise is a promise.” He added that he “will continue to do what I have to do … until the return of my friend Moshe … or until I die”.

Read article in full
Posted by bataween at Sunday, November 09, 2014

First, that cemetery in the picture shown in the article is not in Arazan because there are no graves in Arazan. The place has been cultivated over and the two surviving graves have been taken to Casablanca a few years ago.

The synagogue however, was found almost intact after 45 years thanks to a guardian who lives nearby and wh has been watching over it. The writer might have had the two stories confused.

Here is a video mostly of a visit to the synagogue but at the very end, the cemetery is seen from the road.

Nothing like the picture in the article, far from it.

So did our bawab in Cairo saved us from the mad mob claiming there were no Jews in our building! My nonno (grnad dad) amready had his kitchen knife in his hand to slaughter the women before the mob couold get at them and rape them
sultana