Sami Michael, Iraqi-born ex-communist author, claims to be an outsider looking in. In reality he has become the quintessential Israeli, says Noga Emmanuel in Fathom Journal: 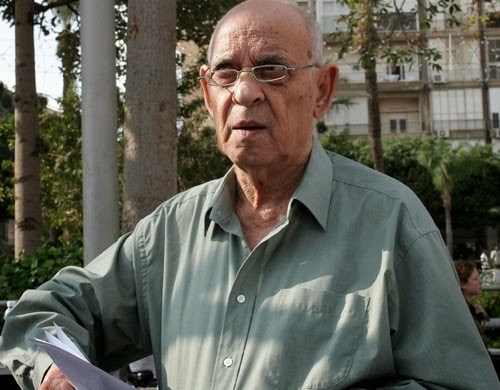 In a speech at a conference in Haifa in June 2012, Michael revealed his enduring disenchantment with the Left:

The Parlour leftists – and in Israel, it is worth noting, the leftists have never left the parlour – repudiated Mizrahi Jewry as expendable ‘raw material’, or in the Communist jargon of that time: the ‘lumpen-proletariat’. This was in spite of the fact that immigrants from Egypt, Lebanon and Bulgaria, and especially from Iraq, held an impressive Communist record from their countries of origin. The Communist establishment in Israel treated these immigrants with manifest arrogance. At the beginning of the 1950s, 20 percent of the ma’abarot dwellers voted for the Communist Party in the Knesset. Not one of them was promoted to a position of any value in the party. The central committee of the Communist Party was and still remains today more ‘purified’ of Mizrahi Jews than any other establishment in the state. The suspicion and arrogance towards the Mizrahi communities formed a solid impenetrable barrier in the ranks of the Communist Party.

Leaving the small but cosy enclave of the Communist Party meant discarding his identity as an Arab-Jew Party member. It was a rite of passage of sorts: he was now confronted with the challenge of joining Jewish-Israeli life. A pivotal moment in his life was the birth of his first child ‘… I will wander no more. This will be my land…’ he thought, as he left the hospital with the newborn baby in his arms.

In the second phase of his ‘becoming’ he set out to fashion for himself a belonging that would not entail submission to cultural norms. For 15 years he put aside his literary ambitions, mostly because the only language he felt he could write in was Arabic and he wanted to write in the language of the land and to reach Hebrew readers: ‘… I live in an Israeli reality in which the language forms an integral part. People speak, think, dream in Hebrew. I cannot write about them in Arabic.’ Writing was a way of proclaiming his existence, a kind of active rebellion. At the end of those 15 years he published Equal and More Equal.

Refuge, Sami Michael’s third novel published in 1977, examines the Israeli political margin – the Communist Party. Within this small self-contained community of like-minded people, some of the country’s most urgent conflicts still play out. The novel covers the first four days of the Yom Kippur war, from Friday 5 October 1973 till Monday night, 8 October. The main characters are Shula, an Ashkenazi, married to Marduch, an Iraqi Jew. They have a mentally-challenged little boy, Edo. Shoshana, Edo’s nanny, is married to Fuad, a Muslim Arab, who runs an Arabic paper for the Communist Party. The group is a kind of fraternity, close knit and bound by ideology and loyalty to a cause.

Marduch is nominally a Communist but also a patriotic Israeli. His scepticism is revealed in the fact that on his shelves there are books censured by the party leadership. He willingly joins his army unit at the start of the war. When his wife questions his willingness to fight for a country he so disapproves of he explains that the state of Israel took him in, gave him refuge, when he was hunted, tortured and nearly executed by the Iraqis. He owes Israel a debt because refuge is a supreme value in Oriental ethos. When the party instructs Shula to provide shelter, refuge, for the Arab poet Fathi who is sought by Israeli police because he is considered a security risk, she immediately obeys, out of deference to her husband’s time-honoured values.

Shula’s mother who pays for Shoshana’s services, is also a member of the Party. She had in the past contrived her daughter’s marriage with Marduch. Shula’s true love, a military officer was not a member of the Communist party and therefore unacceptable. The mother, fearing Shula might marry an Arab, encouraged the marriage with Marduch despite his Mizrahi origin. It was, for her, the lesser of two evils.

In the first two chapters, the author sets up this perfect storm of conflicting loyalties, politics, myths, and interests. The irony is gently interwoven into the straggling narrative lines, as party comradeship rapidly comes unglued: Shula and Marduch believe that if Israel is defeated, it will mean a second Holocaust. Fathi the poet (and the darling of Tel Aviv parlours), hopes for an Israeli defeat, even as he shelters under Marduch’s roof and tries to seduce his wife. Shula’s mother is revealed as a sham communist. Shoshana, married to an Arab, is alienated from her beloved family, not accepted by her husband’s friends and family and worries that her second son is radicalised while her eldest son wants to be an Israeli Jew.

The ironies are scattered every which way. While the events move fast and hang like doom over each of the featured characters, the reader is lulled into a kind of stupor by the understated, nearly hushed tones of the novel. No sirens in the background alert us to the raging war but a kindly neighbour who comes to Shula’s apartment to hang blackout sheets over the windows.

Irony, Michael’s chosen trope for his writing, accords with his belief that it was ‘from the margins you can better see the centre’. Immanuel Levinas considers the self and the Other as always in a dynamic relationship. If the self is the centre, the Other is the margins. In Michael’s Israeli novels, it is a given that Ashkenazi culture occupies the centre, is the assumed ‘self’ of society. As a Mizrahi immigrant-author, Michael balks at being subsumed into that centre. By refusing to be bribed, seduced or chastened into abandoning his intrinsic centre, for which that cultural hegemony is the margins, he never relaxes his ironic gaze upon the unfolding events. His inner awareness of himself as a perpetual but resilient Other is thus closely related to the ironic mode of his fiction.

The story of Sami Michael with its many life ironies says much about the country that had received him and other immigrants with such churlishness. This imperfect country forgave him without reserve for refusing to be integrated into it, enabled him to acquire the tools and provided him with platforms from which to chastise it to his heart’s content, praised him for his outstanding literary achievements, nodded meekly at his pessimistic glower, and treated his robust and authentic Otherness as a source of national pride. These relational configurations between Author and Society, Centre and Margins, Self and Other are always in a flux, thus purveying the supreme irony: Sami Michael is the definitive all-Israeli author.

Read article in full
Posted by bataween at Wednesday, November 05, 2014

Sami Mikhael wrote a young adult book called Sufa beyn haD'qalim, which is a novel about the Farhud of 1941. One of my kids was assigned to read it in school.