Writing in Haaretz Eyal Sagui Bisawe has finally seen Amir Ramses' film "Jews of Egypt". He was surprised to see the film's sympathetic portrayal of Jews, almost all communists, in order to further Ramses' political agenda: to hark back to an earlier age of tolerance and pluralism.


I waited two years to see the documentary “Jews of Egypt.” For two years, I’ve been unable to attend film festivals around the world, and during that period, since the revolution, many Egyptian movie theaters have been closed. Plus, the director of this film, Amir Ramses, has refused to let it be screened in Israel (it has been screened once in Tel Aviv*- ed). Finally, I saw it this week. Where? In the Land of Milky and Honey: Berlin.
As the saying goes, the bigger the expectations, the bigger the disappointment, but in this case, the surprise was just as big.

In many respects, "Jews of Egypt" is an exhausting film, with questionable cinematic value: countless “talking heads,” outdated editing effects and use of still photos, topped off with a dramatic soundtrack, in case the viewers were not riled up enough.

Furthermore, the repetition of the same version of events from multiple interviewees makes one think that Ramses is trying to prove something beyond any doubt in his film. Again and again, the interviewees tell the same stories about the pleasant lives they enjoyed, about the openness and liberalism they experienced, and the attitudes toward them which worsened over time. They told of their sorrow as they left their first homeland, and of course of their love of that land, despite the treachery and disappointment.

One gets the impression that Ramses sought to prove to the viewers that Egyptian Jews remained loyal to their first homeland after spending years in detention camps, and even 60 years after they were forced to leave their homes following the three-pronged attack on Egypt by Israel, Great Britain and France that came to be known as the Sinai Campaign.

And that is perhaps the central problem of this film, in terms of content: The fact that the film is apologetic doesn’t actually stem from the interviewees' love for Egypt – and there’s nothing wrong with that – but rather comes more from the biased selection of the interviewees themselves. 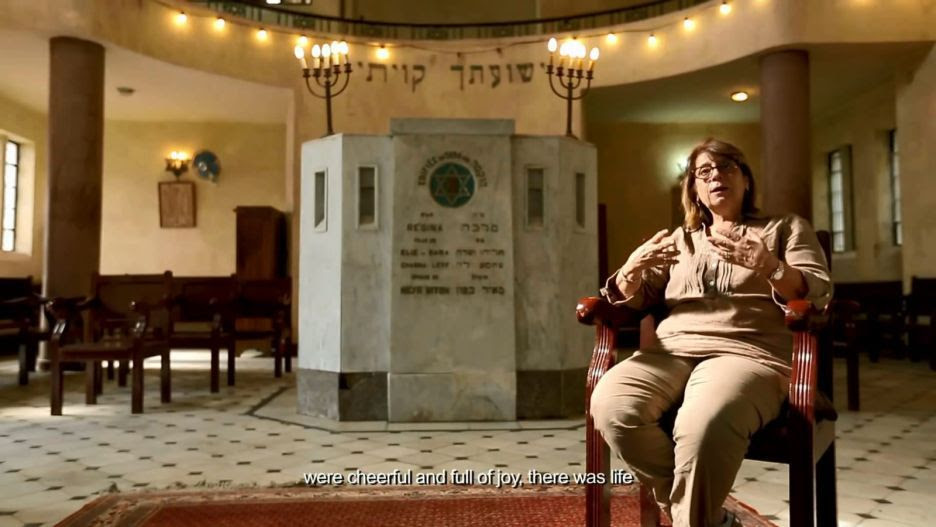 Magda Haroun, head of the Egyptian Jewish Community Council, from 'Jews of Egypt.'
Anyone who sees "Jews of Egypt" is likely to receive the misguided notion that not only were most Jews in that country political activists, but that they were all leftists, founders of socialist and communist parties, while also being Egyptian nationalists.

In truth, Egyptian Jews, like many people in the world at the time, were politically indifferent; some were Zionists, some were both Zionists and Egyptian nationalists. The interviewees in the movie were all left-wing activists, ranging from those who converted to Islam and stayed on, to those who fled to France. Absolutely no "ideologically distinctive" Jews were interviewed here – in particular, no Egyptian Jewish Zionists and especially none who went to Israel.

At the same time, despite all that, Ramses is deserving of some praise. Rami Abdel Razak, writing in the Egyptian newspaper Al-Masry al-Youm, explains that the film was not meant to tell the stories of all the Jews in Egypt, but only of a specific group of them – specifically, those who have a direct connection to the country's contemporary history. Ramses can also be appreciated for the fact that he and the producer, Haitham El-Khameesy, funded the movie themselves, with no support from cinema foundations, and for the fact that they used many rare archival materials (like images of the January 1952 fire in Cairo).

Also, the story of Jewish communist Henri Curiel is noteworthy, as it had fallen through the cracks between the Israeli and Egyptian narratives. The interview with Curiel’s son, and the very fact that Ramses brought the issue up for public discussion in Egypt, is commendable.

The film should not be seen as just another documentary about a once-flourishing Jewish community that will soon be gone from the world. It should be viewed via the internal Egyptian lens, where the term “Jew” has become a hateful epithet. One should remember that this work was created by someone who lives in a society where the terms “Jew,” “Zionist” and “Israeli” have all become completely distorted and turned into curse words, and that the current generation had no contact with the Jewish community that once existed in their country. All Ramses’ generation knows about Jews comes from a context of occupation and war with the most bitter rival Egypt ever had: Israel.
Within this context, Ramses’ choice of specific interviewees is important for the average Egyptian viewer, who has trouble imagining a modern Jew that identifies as Egyptian, that loves Egypt, is concerned for Egypt’s interests, doesn’t see Egypt as an enemy, and wants no harm to come to it. Furthermore, the director presents the Jewish interviewees as the "good guys” of the story, whereas the Egyptians are the supposed “bad guys,” characterized by President Gamal Abdel Nasser, who expelled the country's Jewish community.

Thus, Ramses not only makes room for a new, critical view of modern Egyptian history: He also helps to foster tolerance and open-mindedness, while expressing aspirations for the future.
Indeed, Egyptian Jews, as well as Jews from Morocco, Tunisia and Lebanon, have been transformed in recent years into objects of nostalgia in those countries. The longing is not necessarily for those Jews’ physical presence there, but rather for the time periods that they represented: the eras of pluralism, cosmopolitanism and tolerance.

“Jews of Egypt” is not the first work centering on this subject: Local Jewish characters have been included in Egyptian drama series, and there have been many articles and documentary television shows about the community. Recently, several TV shows about Cairo’s Jewish quarter have been produced, and talk shows have featured some of the few Jews remaining in the country, including Magda Haroun, head of the Egyptian Jewish Community Council.

“Jews of Egypt” was first released in 2012, just as the Muslim Brotherhood rose to power there. The regime first sought to censor parts of the film, especially those relating to the bonds forged between Brotherhood members and Jewish activists held in detention cells. Later, the Brotherhood sought to keep the movie from being screened. However, public opposition – which included a petition in favor of screenings – succeeded in the end, and brought the film success not only among critics in Egypt, but among the public as well.

A few weeks ago, the second part of the film was released, without any interference on the part of the government. In it, Ramses focuses on key figures in the Jewish community who remained in Egypt, barely 15 people. One can only hope that this time the film will be more accessible, even to Israelis.

Jews of Egypt film has London premiere
Posted by bataween at Thursday, November 06, 2014