This is a useful overview by Ksenia Svetlov, writing in Israel Hayom, of Jewish heritage sites facing extinction in the Arab world. Much of what Svetlov reports, as a journalist in Israel, is necessarily based on hearsay, and some of it may be false: for instance, the latest photos Point of No Return has seen of Ezekiel's tomb show that Hebrew inscriptions have not been erased, but have been exposed. (With thanks: Lily) 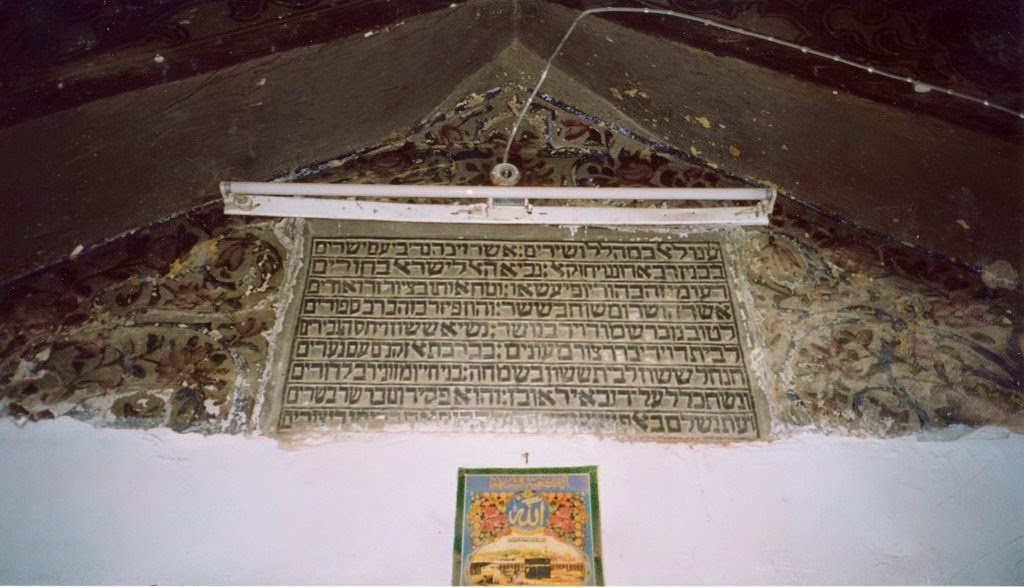 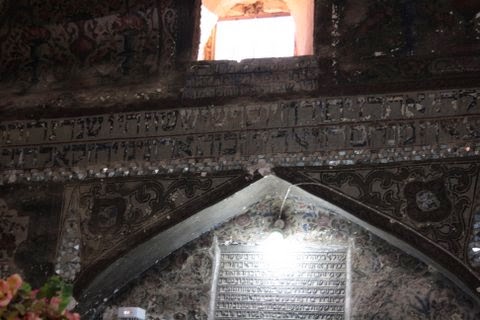 In a time when large areas of Iraq and Syria are controlled by fanatics, at the peak of a bloody civil war, it is hard to get a clear picture of the state of the Jewish heritage sites in those regions. Still, Professor Shmuel Moreh of the Hebrew University, an Israel Prize laureate in Arabic literature, a native of Baghdad, and the author of the book "My Beloved Baghdad," speaks of a group of courageous Iraqis who took on the difficult mission to document the damage done to Jewish holy sites, synagogues and cemeteries, and to the residential neighborhoods of one of the oldest Jewish communities in the Middle East.

"Our friends, Shiites and Sunnis, most of them academics employed in universities in Iraq, writers and poets, are documenting what is going on in their country for us," Moreh said. "When news about 'renovations' at Ezekiel's Tomb appeared in the Arabic press, we sent a few friends to Al Kifl, and they brought sketches and photographs of the place. As it turns out, the Shiites destroyed the Hebrew inscriptions under the guise of renovations, and turned the place into a mosque."

At Moreh's request, his friend -- one of the Iraqis who mourns the destruction of Iraq's Jewish culture and dreams of its restoration -- visited the neighborhood where he grew up, and photographed the building and the Meir Taweig Synagogue, where he prayed as a boy. Moreh said the people who go on these documentation missions are private individuals who often do so at risk to their own lives.

Moreh is not the only one who is concerned. Officials of the World Organization of Libyan Jews tell of the attempts at documentation of what is left of the Jewish heritage sites in Libya. "During [President Moammar] Gadhafi's time, we were in contact with the authorities and also with journalists who visited Libya. They photographed the remains of cemeteries and ancient public institutions," Libyan historian Yaakov Hajaj-Lilof, who runs the Institute for the Research and Study of Libyan Jewry, said.

Gadhafi, he said, engaged for many years in the confiscation of Jewish property, the destruction of Jewish cemeteries and the transformation of synagogues into mosques. But during the last few years of his regime, when he was trying to curry favor with the West, he met with representatives of Libyan Jewry and held talks for the payment of compensation to Jews who were not citizens of Israel. A visit by MK Moshe Kahlon to Libya was also reportedly discussed, but never took place.

But all memory of Jewish life in Libya was almost wiped out under Gadhafi's regime. Cemeteries were destroyed over the locals' desire to used the tombstones as building materials, and synagogues were turned into mosques or public buildings. When I visited Libya in 2005, I saw the destroyed, abandoned cemeteries in the city of Zliten, roughly 70 kilometers (40 miles) from Tripoli. "When the armed gangs started taking control of Libya after the overthrow and murder of Gadhafi, there was nothing to save anymore," one of the people involved in the talks with Gadhafi at the time, said.

While concerned members of the Damascus Jewry Organization in Israel are following events in Syria closely, they prefer not to expand documentation efforts, which are evidently focused on the few Jews still living in the war-torn country. Several year ago, Moshe Shemer, the editor of the journal Mi-kan U-mi-sham ("From Here and There"), kept track of the renovation projects in the Jewish Quarter in Damascus, where boutique hotels and restaurants began springing up. Now he is worried that the remnants of a once-magnificent community could go up in the flames.

Local residents have begun documentation and preservation projects despite the war. Such actions are taken by lovers of culture, archaeology students and ordinary citizens who fear for the fate of their country's cultural heritage. In his article "It's Not Too Late to Save Syria's Cultural Heritage" published in Foreign Policy Journal, Franklin Lamb, author of the book "Syria's Endangered Heritage," wrote about efforts by the Syrian regime and local volunteers in the area to document the damage caused to ancient sites , as well as the efforts to renovate the Umayyad mosque and the magnificent Crusader castle known as Krak des Chevalier in western Syria.

Lamb is known for his connections with the Syrian regime and to Hezbollah in Lebanon -- a fact that might account for the lack of any mention of Jewish sites in his article. But the Facebook pages in English and Arabic that the article mentions contain information about the demolished synagogue in Jobar and other places. The Syrians themselves say that in some cases, there is no way to examine the sites, which have now turned into battlefields. In other cases there are reports of damage, but no funding or experts to help in reconstruction efforts.
Like many places in the Middle East, Syria has not yet been thoroughly studied, and pirate archaeological digs by interested parties looking for Crusader-era treasure, could severely damage Syria's past and future, according to a blogger who calls himself Ibn Haleb.

Contrast this with
http://www.jewishpress.com/sections/travel/poland-celebrates-opening-of-jewish-history-museum/2014/10/29/
--malca