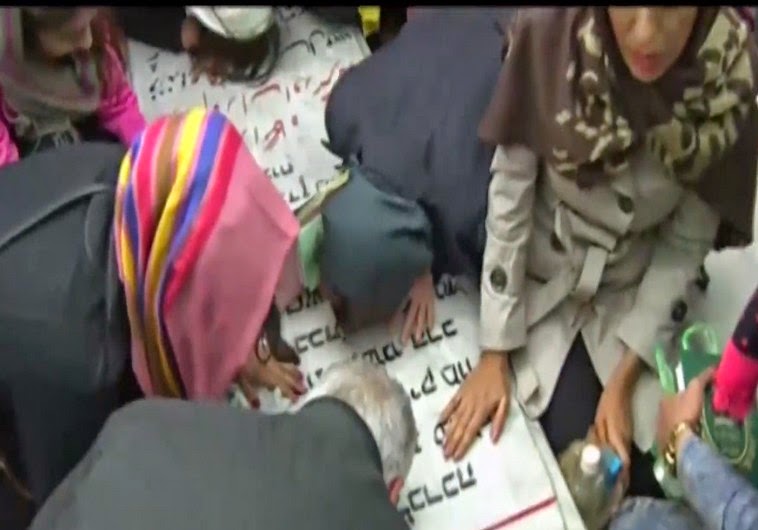 Iranian Jews pray at the tomb of a rabbi in Yazd (photo: Iranian Media )

This AP dispatch has gained wide coverage in the Israeli and western press. Timed to coincide with the Iran nuclear talks, it is designed to curry favour with the West, and the US in particular. Cloaked in a veneer of objectivity, it projects an image of an Iran tolerant of its minorities. Gone is the extremist Ahmadinejad - the regime under Ayatollah Rouhani is 'moderate'. Why are 1,000 Jews going on pilgrimage, and who is the  rabbi they are venerating? The article does not tell us.

YAZD, Iran (AP) — More than a thousand people trekked across Iran this past week to visit a shrine in this ancient Persian city, a pilgrimage like many others in the Islamic Republic — until you notice men there wearing yarmulkes.

Iran, a home for Jews for more than 3,000 years, has the Middle East’s largest Jewish population outside of Israel, a perennial foe of the country. But while Iran’s Jews in recent years had their faith continually criticized by the country’s previous governments, they’ve found new acceptance under moderate President Hassan Rouhani.

Most of Iran’s 77 million people are Shiite Muslims and its ruling establishment is led by hard-line clerics who preach a strict version of Islam. Many Jews fled the country after the 1979 Islamic Revolution. Jews linked to Israel afterward were targeted. Today, estimates suggest some 20,000 Jews remain in the country.
Tensions grew under Ahmadinejad, who repeatedly called the Holocaust “a myth” and even sponsored an international conference in 2006 to debate whether the World War II genocide of Jews took place. Vice President Mohammad Reza Rahimi once accused Jews as whole of being drug dealers.

But since Rouhani took office last year, Jews say they have been heartened by the support they’ve received. His government agreed to allow Jewish schools to be closed on Saturdays to mark Shabbat, the day of rest. Rouhani also allocated the equivalent of $400,000 to a Jewish charity hospital in Tehran and invited the country’s only Jewish lawmaker to accompany him to the United Nations General Assembly in New York last year.

“We were fearful in the ’80s. We were feeling the pressure. Now, we are not concerned anymore. We feel secure and enjoy freedoms,” said Mahvash Kohan, a female Jewish pilgrim who came to Yazd from Shiraz. “In the past, Israel and others were providing incentives such as housing that lured some Jews. Now, it’s not like that. And Iranian Jews have better living and working conditions in Iran. So, no one is willing to leave now.”

Still, human rights groups say Jews and other minorities in Iran face discrimination. Last year, officials in Iran’s presidency denied that Rouhani had a Twitter account after a tweet that appeared to be from the leader offered a greeting for Rosh Hashana, the Jewish New Year. Iranian state television also has aired anti-Semitic programming.

Those taking part in the recent Yazd pilgrimage to the tomb of a famed Jewish scholar, however, praised the Iranian government’s new outreach.

Jews from across Iran gather in Yazd (Press TV)
Posted by bataween at Saturday, November 29, 2014

There's nothing more tiresome & frustrating than the constant verbose bemoaning of the injustices suffered by the nearly one million authentic Jewish refugees from the muslim orient; East and west of Suez. Who barely escaped with their lives from the lands that THEY were aboriginal to: more than 1000 years before the Muhammetan god "allah" first erupted as a bloody-minded superstar onto the killing fields of history.The equally tiresome & non-stop "scholarly" emanations from the legions of junk academe,only add to our distractions from what WE,in the Diaspora must DO.As therapy for our own dysfunctions, along with other potential strategic satisfactions. But what opportunity are THEY distracting us from? It is WE who now have the strength & opportunity for righteous retribution: As never before! ESPECIALLY in the Diaspora:! Against those whose justifiable hopelessness & utter lack of capability for even the lowest standards of self-restraint{combined with their quantitative mass},is the only weapon they have. Not to mention their only true success: The hoax of "palestine" [and all muslims],as the last word in victimization.i.e.The parasitic nomad as "innocent victim".
They are indeed "successful" as nomadic parasites & UNPUNISHED mass murderers from every perspective: Mendacious demography, no capability for civilized governance of any kind,fabricated "refugees",non-stop baksheesh [e.g. unearned welfare payments from the muslim-diddled u.n. for sixty years] sado-masochism as mainstream behaviour everywhere THEY live,the unexamined & corrupt support from the judgementally challenged,on a global scale. And on & on a la nausea But THEY, and their largely lib-left "dhimmis", are grotesquely vulnerable, especially in the Americas and Europe:In every respect. And,it is THEY who are totally exposed. We have the strength & talents to make THEM,wish they were never born. And carry it off reasonably well, within the limits of OUR rights to self-defence & freedom of expression against evil intent.Under the rule of law. But,As matters stand now, it is THEY who have the upper hand. Like in Rotherham London, Malmo Sweden, the public housing projects of France, Toronto Canada, the streets of New York, et al.
THEY think us cowards and fools who leave ourselves "Naked to our enemies".And they are right.THEY know who and what they are. And THEY know how just how effectively WE can defeat and rid ourselves of THEM: Reasonably humanely and democratically at that.WE owe THEM nothing. What choice do we have ? It's now or never.
Norman L. Roth, Toronto, Canada

Is the bizarre "team" of John "Kerry"[a.k.a.Kohn ?]as in George Schwartz changed to Soros;AND Barak Hussein Obama, now doing Count Folk Bernadotte "redux"? With their blatant "strategy" of using Iran[istan?]as a diplomatic 'taser' AGAINST Israel? We don't have to wonder any more.Does yesterday's typical Islamic abbatoir-job on a defenceless Japanese victim surprise us at all? The poor man was lucky he wasn't crucified. Perhaps the Japanese government can volunteer a detachment of their special forces to the Mesopotamian blood-fest:As authentic "feet on the ground" to speak the only language that Islam's masses understand. No matter what THEIR official citizenship. Of course crucifixion IS a favourite practice of Islamic governance that should have launched dozens of legitimate investigations decades ago.With many recent applications since the 1990s in Sudan,Saudi-Arabia, Egypt & Yemen. Much less Pakistan & Afghanistan.With the usual cooperative cover-up by the u.n's most vile agencies. Especially interesting is the u.n.'s[affiliated]"international criminal court's" refusal to even acknowledge the 'disappearance' of a gay -leftist pro-"palestian" advocate named Vittorio Arrigoni. Who was so enamored of THEIR 'cause',that he settled among THEM:In Hamastan [a.k.a Gaza].A 'military court' in that standard-model Islamic "heart of darkness" [April,2011] dispensed typical Muslim 'justice' to that poor deluded soul for no apparent reason. There is much speculation about what was done to his body: Both before & after his remains were 'disappeared'. Crucifixion & gang-rape[Ghaddafi's fate prior to being shot to ribbons] have not been ruled out.Any takers? With a very strong stomach for 'grande guignole': e.g.The Dr. Dementos of the u.n.'s "Human Rights" council? Maybe OXFAM? Or Human Rights Watch? How about Amnesty International ? Didn't think so.
Norman L. Roth, Toronto Canada

Feb.16, 2015
Nothing can stop the sustained aggravated assault of Islam on the other 5/6 of humanity: Except a global strategy of direct ACTION:By all threatened parties.
Especially THEIR host societies in Europe and the Americas:And a resurgent,but still menaced India; Perhaps, in terms of body-count,the most grievously wronged of all by historic Islam. Except the Armenian nation; The centennial of whose genocide appears to be passing with no meaningful action at all. While the remaining aboriginal Christian communities of the Muslim orient are being slaughtered on a daily basis; As "grande-guignole" /terror-theater by the "sons of the Prophet". Why did OUR feckless leaders,permit THEM to settle among US ?Over a period of more than half a century. At the behest of a largely liberal-left swarm of dhimmis; Who carried the banner of 'multiculturism to a precipice of OUR own making.THOSE who benefited most,continue to insinuate themselves into low & high office,the media, the law schools, the clergy, the u.n. corruptocracy, junk academe and so many well funded "n.g.o"s: WE know THEIR addresses all too well.
THEY have evolved into blatantly parasitic and overtly hostile 'communities of special interests':Who dwell among US. But are not of US.And who strike at US from within;On a tediously predictable basis.It is WE who have reached a "POINT of NO RETURN". It is no secret what policies have to be pursued in order to put a "cordon sanitaire" between US & THEM.They will be at least temporarily painful. Even with scrupulous regard to the rule of law; And humanitarian methods of repatriation.Which will vary according to the legal traditions and severity of the invidual societies most afflicted. But who CHOSE to be SELF-victimized by asinine open-door immigration policies pursued for over 50 years. Even when the inevitable demographic consequences were predicted at the time.[e.g. Jean Raspail, Enoch Powell etc.]
Now there are no options left. The consequences of continuing to do nothing will dwarf the discomfort of doing what is necessary NOW.
If our democratically elected leaders continue to take the path of least resistance,the dark forces of vigilante justice and spontaneous 'payback' will once more find their "place in the sun".
Norman L. Roth, Toronto, Canada.