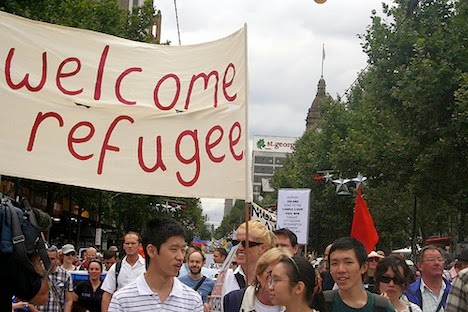 Of all the refugee populations created after World War ll, only the Palestinians remain refugees, the historian Andrew Roberts  points out in the Wall Street Journal. What is disappointing, however, is that he does not once mention the greater number of Jewish refugees in the Arab-Israeli exchange of populations, nor that many Palestinian Arabs were enthusiastic supporters of Adolph Hitler.

Yet all of these refugee groups, except one, chose to try to make the best of their new environments. Most have succeeded, and some, such as the refugees who reached America in that decade, have done so triumphantly. The sole exception has been the Palestinians, who made the choice to embrace fanatical irredentism and launch two intifadas—and perhaps now a third—resulting in the deaths of thousands of Palestinians and Israelis.

After Germany lost World War II in 1945, more than three million of its people were forced to leave their homes in the Sudetenland, Silesia and regions east of the Oder and Neisse rivers—lands that their forefathers had tilled for centuries. These refugees embarked on a 300-mile journey westward under conditions of extreme deprivation and danger with only what they could carry in suitcases.

One can’t be expected to sympathize too much with people who had enthusiastically supported Adolf Hitler, but among them were children who were not responsible for the sins of their fathers. Having reached the new borders of East and West Germany, as delineated by the victorious Allies, they settled and made no irredentist claims to Poland and Czechoslovakia, the countries they had left. Today those once penniless refugee children include some of the most successful people in Germany, a country they helped make a prosperous, model democracy.

Across the Soviet Union in the late 1940s, the paranoiac evil of Joseph Stalin ensured that entire peoples, sometimes numbering in the millions, were moved from one side of Eastern Europe and the U.S.S.R. to the other. Some, like the Cossacks who had fought for Hitler, were massacred wholesale when they fell into the hands of Stalin or his satellite henchmen, such as Yugoslavia’s Marshal Josip Tito.

Millions of other people, as part of Communist schemes unrelated to the war, were “relocated” to Siberia, the Crimea or Central Asia, often many hundreds of miles from their ancestral lands and under the harshest conditions short of genocide. In all, forced internal migrations of the Tatars, Volga Germans, Ingush, Balkars, Karachays, Meskheta Turks and other ethnic groupings numbering some six million led to the deaths, according to the Soviets’ own figures, of up to 1.5 million, including 46% of the Crimean Tatars. Yet there are no appreciable irredentist movements among these former Soviet citizens today. They made the best of a new reality rather than carrying on a decades-long and ultimately hopeless struggle to return.

Similarly, the late 1940s saw massive population transfers in the Punjab and Northwest Frontier territories of India when the British brought their empire there to a close in 1947. Some 16 million people crossed between the new states of Pakistan and India, leading to the deaths of between one-half and three-quarters of a million people in the communal massacres that ensued.

Yet while there are severe border disputes still between India and Pakistan over Kashmir, practically no one from the Muslim, Hindu and Sikh communities is today agitating for restitution of the lands their forefathers farmed or owned in Punjab, the Northwest Frontier or elsewhere. There is distrust, but modern Indians and Pakistanis have moved on. The same is true of other parts of the world, such as Burma and South Africa, which also saw ethnic upheaval in the late-1940s.

Sadly, it has been the Arab states’ cynical and self-interested policy for nearly seven decades to keep the Palestinians boiling with indignation. No one can doubt that for those who have continued to live in camps intended for long-ago refugees, the founding of the state of Israel in 1948, when thousands of Palestinians fled or were expelled, was indeed a catastrophe. But many other peoples have learned to deal with equal or worse by moving onward and upward; calling them refugees several generations after their forebears’ upheaval would be unthinkable. The lessons of history are rarely enunciated more clearly.

Read article in full
Posted by bataween at Sunday, November 23, 2014

The Arab states kept the 1948 Arab refugees in camps. But these camps were paid for and funded by Western powers. Most of the funds came from the USA and much came from the UK too. So we have not only the Arabs to blame for the perpetuation of the Arab refugee problem.

I definitely agree with the article, I have another interesting point. Islamic expansionism created the greatest refugee population the world has ever seen... the Rom people. Additionally, they get such little support!

here's an article on Christian refugees getting ready to flee Iraq after persecution. Note that the Christians complain that the Kurdish regional govt, which in fact did give them temporary refuge, did not want to give them weapons to defend themselves. Without weapons of their own, they fear that no one will defend them. Surely this shows why Israel must have weapons and provide for its own defense. One last point, the British reporter, like Andrew Roberts, has nothing to say about the Iraqi Jews nearly all of whom are now outside Iraq.