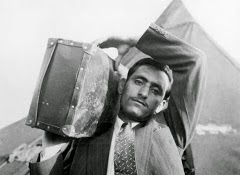 Iraqi-Jewish refugee arrives in Israel, 1951. To hear Lyn Julius being interviewed on the Voice of Israel about Jewish refugees from Arab lands, click here.


Barely three years after the Nazi Holocaust came to light,  Jews were ethnically cleansed from the Arab world. And the ghosts of Nazism haunt us still, argues Lyn Julius in  the Times of Israel:

On 30 November, schools, ministries and organisations in Israel and worldwide will be marking a new day in the calendar — a day to remember the flight of Jewish refugees from Arab countries and the destruction of their ancient communities.

It is often said that these Jews paid the price for the creation of Israel. In revenge for the mass exodus of Palestinian Arab refugees, Arab mobs and governments turned on their defenceless Jewish citizens. But in truth, there is sound evidence that even before the establishment of Israel, and before the great mass of Arab refugees had fled, Arab governments were conspiring to victimise their Jews and dispossess them of their land and property.

This week, 67 years ago, saw anti-Jewish tensions reach new highs in Palestine and the Arab world as Arab delegates ramped up their rhetoric at the UN, which was due to vote on the Partition of Palestine.
According to UN records the Egyptian delegate, Heykal Pasha, was already warning on 24 November 1947 about the consequences of establishing a Jewish state in Palestine:

“the United Nations…should not lose sight of the fact that the proposed solution might endanger a million Jews living in Muslim countries…creating anti-Semitism in those countries even more difficult to root out than the anti-Semitism which the Allies tried to eradicate in Germany…making the UN…responsible for very grave disorders and for the massacre of a large number of Jews.”

Heykal Pasha’s words were prefaced with talk of ‘massacre’ ‘riots’ and ‘war between two races’. According to Yaakov Meron, Pasha’ s threats were not confined to Egypt but repeatedly mentioned Jews in other Muslim countries. They were not uttered on the intiative of Egypt but were ‘the outcome of prior coordination between Arab states then represented at the UN and the Arab league.”

The Palestinian delegate, Jamal Al-Hussayni, said the Jews’ situation in the Arab world “will become very precarious. Governments in general have always been unable to prevent mob excitement and violence.”

Syrian UN representative Faris Al-Khuri is quoted in the New York Times as far back as 19 February 1947 stating that: “Unless the Palestinian problem is settled, we shall have difficulty in protecting the Jews in the Arab world.”
A Jewish publication reported: “With the entire Arabic press fulminating against the perfidy of Zionism, and with Arab politicians rousing their underfed and enervated masses to a dangerous pitch of hysteria, the threats were certainly not empty.”

In Iraq the threats were made publicly, and its Foreign Minister Fadel Jamali stated at the UN:

“The masses in the Arab world cannot be restrained. The Arab-Jewish relationship in the Arab world will greatly deteriorate. There are more Jews in the Arab world outside Palestine than there are in Palestine. In iraq alone we have about 150,000 jews who share with Muslims and Christians all the advantages of political and economic rights. But any injustice imposed on the Arabs of Palestine will disturb the harmony among Jews and non-Jews in iraq. it will breed interreligious prejudice and hatred.”

Just two days after the State of Israel was proclaimed, a New York Times headline on May 16, 1948 declared “”Jews in Grave Danger in All Moslem Lands, Nine hundred thousand in Africa and Asia face wrath of their foes.” An article, written by Mallory Browne, reported on a series of discriminatory measures taken by the Arab League against the Jewish residents of Arab League member states ( at that time, Egypt, Iraq, Jordan, Lebanon, Saudi Arabia, Syria and Yemen).

The article reported on a: “text of a law drafted by the Political Committee of the Arab League which was intended to govern the legal status of Jewish residents of Arab League countries. It provides that beginning on an unspecified date all Jews except citizens of non-Arab states, would be “considered ‘members of the Jewish minority state of Palestine.’ Their bank accounts would be frozen and used to finance resistance to ‘Zionist ambitions in Palestine.’ Jews believed to be active Zionists would be interned and their assets confiscated.”

1. Beginning with (date), all Jewish citizens of (name of country) will be considered as members of the Jewish minority of Palestine and will have to register with the authorities of the region where they reside, giving their names, the exact number of members in their families , their addresses, the names of their banks and the amounts of their deposits in those banks. This formality is to be accomplished within seven days.

2. Beginning with (date), bank accounts of Jews will be frozen. These funds will be utilized in part or in full to finacne the movement of resistance to Zionist ambitions in Palestine.

4. Jews who accept active service in Arab armies or place themselves at the disposal of these armies, will be considered as ‘Arabs’.

5. Every Jew whose activities reveal that he is an active Zionist will be considered as a political prisoner and will be interned in places speficially designated for that purpose by police authorities or by the Government. His financial resources, instead of being frozen, will be confiscated.

6. Any Jew who will be able to prove that his activities are anti-Zionist will be free to act as he likes, provided that he declares his readiness to join the Arab armies.

7. The foregoing (para 6) does not mean that those Jews will not be submitted to paragraphs 1 and 2 of this law.

In brief, the Draft Law was a prediction of what was to happen to almost a million Jews in the Arab countries. It became a blueprint, in country after country, for the laws that were eventually to be enacted in these countries against Jews, for the actions that devastated the Jewish communities in Arab lands; and for the forced exodus that was to follow.

On 19 January 1948, the World Jewish Congress sent a memorandum appended to the Arab League draft law to the United Nations Economic and Social Council to protest against it and the anti-Jewish unrest it had generated in the Arab world. Unfortunately, the fate of this memorandum rested in the hands of the President of the Council, Dr. Charles H. Malik, the representative of Lebanon to the United Nations, designated by Arab states to be their Council representative. Lebanon was one of the founding members of the Arab League, one of the states which had deliberated upon the anti-Semitic draft law. Mr. Malik used a procedural maneuver to ensure that nothing was done in response to the World Jewish Congress memorandum.

Years later, in 1984, sitting in the garden of his house with other Arab Affairs journalists, the Israeli columnist Dr Guy Bechor challenged Charles Malik. Why did he do nothing to block an anti-Zionist, nay antisemitic plan?

” Lebanon had no choice but to toe the Arab line,”replied Malik. As a Christian he had to prove loyalty to the Arab/Palestinian cause, and was even required to be more anti-Israel than the Muslims.

What is shocking is that 856, 000 Jews were driven from their homes by Nuremberg-style laws just three years after after the full horror of the Nazi Holocaust of six million European Jews had come to light. Nazism had a great following in the Arab world and influenced reactionary movements, such as the Muslim Brotherhood, founded in 1928. Arab collaborators with the Nazis, such as the Grand Mufti of Jerusalem, were never tried for war crimes in 1945. Instead, antisemitism in Arab states, much of it using Nazi tropes and memes, has soared to stratospheric heights.

The ghosts of Nazi-inspired genocide and ethnic cleansing are still with us. The victims are still the same victims: the Jews and their state, heretical Muslims, Kurds, non-Muslim minorities. We can begin to exorcise these ghosts by learning about past wrongs – beginning on 30 November.
Read article in full
Posted by bataween at Friday, November 28, 2014

Bataween, Here is a gem of a quote from an Arab. Justifying the refusal to let Enrico Macias come to Algeria, a certain Algerian pointed out that Macias wanted to visit the grave of his father-in-law, Raymond Leyris. He then charged that Leyris was a member of the OAS, an anti-Arab, pro-French underground group.

Ben Dror Yemini ask, What about the Jewish Nakba?