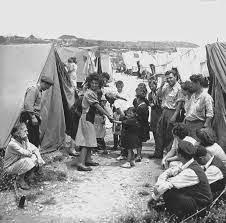 A ma'abara or transit camp, home for Jewish refugees driven from their homes in the 1950s

Sadly, the 'Benayoun affair' is overshadowing the first ever commemorative Day for Jewish refugees from Arab countries. Shimon Oyahon MK, the driving force behind the Law designating 30 November as the Day, says the singer's latest controversial release is a distraction from the real racism that caused the ethnic cleansing of Jews from the Arab world. Read his Times of Israel blog (with thanks: Jonah) :

The controversy surrounding Amir Benayoun and whether his recent song “Ahmed Loves Israel“ should lead to cancelation of his invitation from the president’s residence has sadly become a major distraction from a far greater injustice predicated on racism and discrimination. Few people who have followed this front-page story are aware that the event at which Benayoun was supposed to appear was the first ever official state ceremony in commemoration of the Jewish refugees from Arab countries.

The real issue of racism here is the expulsion and forcing out of 850,000 people from their ancestral homes because they were Jews and no one is talking about that, or has talked about it for 66 years. Suddenly a song that some consider offensive is gaining attention and once again people are forgetting about the historic injustice done to so many people that has still not been rectified.

Unfortunately, most are not aware of the history of the Jews and their eventual ethnic cleansing from the Middle East and North Africa during the Twentieth Century. While the Land of Israel was the birthplace of the Jewish People, for thousands of years Jews developed their unique and indigenous civilization around the Middle East. Jews and Jewish communities have existed in the Middle East, North Africa, Babylon, the Levant, the Arabian Peninsula and the Gulf region for millennia.