Increasingly, we are hearing this slogan, as applied to the religious minorities of the Middle East. First it is the Jews' turn to be wiped out, then the Christians will follow. Where did this proverb come from? Opinions vary, but there is strong evidence that the saying originated with Islamist mobs in the 1930s and 40s. Extract from a Wikipedia entry: (With thanks: Edwin) 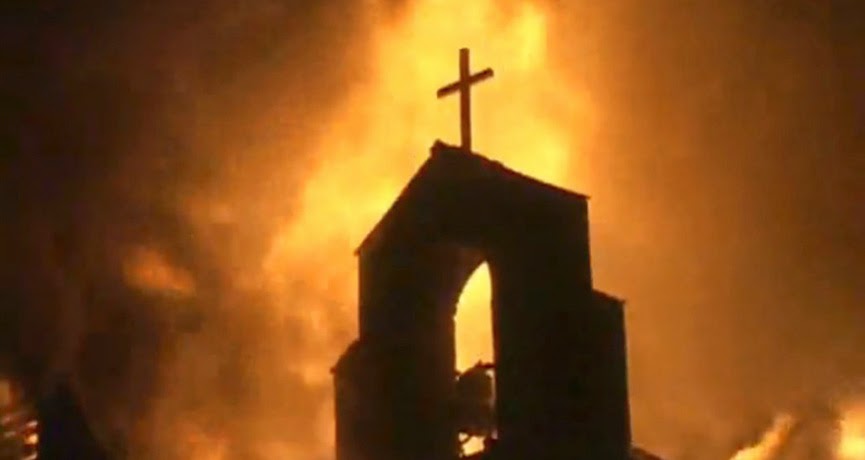 A Christian church burning in Iraq

In 1940, a pro-Zionist soil conservationist Walter Clay Lowdermilk asserted the proverb meant that after Arabs ‘have destroyed the Jews they will destroy the Christians,’ predicting a massacre of Jews would occur if Britain left Palestine. Lowdermilk further claimed that 80,000 Iraqi Assyrians had been massacred after the British relinquished their mandate in Iraq in 1932.[13]

In the opinion of Benny Morris, who again provides no source for the claim, around 1947-8 in Palestine, ‘all (Christians) were aware of the saying: 'After Saturday, Sunday,' which he calls a 'popular mob chant' of the time and glosses as meaning,'after we take care of the Jews it will be the Christians’ turn'.[14]

The phrase appears to have gained currency to refer to population expulsions, following the establishment of the State of Israel and the subsequent Jewish exodus from Arab and Muslim countries. According to a 1956 field report by American Universities staff, the phrase had been circulating for roughly a decade by that time in the Near East with the sense: 'after the expulsion of the Jews, whose Sabbath is on Saturday, the Christian Westerners will follow.'.[15]

According to author Bat Ye'or, it was employed by members of the Muslim brotherhood in Egypt in 1947, as part of their demonstrations against Zionism, which spilled over into attacks on Christian communities, held accountable for attempts to secularize Arab society, in 1947. A Coptic church in Zagazig was burnt down, and in anti-Christian demonstrations in Upper Egypt the slogan was:


Today it is Zionism’s turn, tomorrow it will be Christianity’s; today is Saturday, tomorrow will be Sunday.[16]

Joseph Wahed, founder of advocacy group JIMENA, whose own family was expelled from Egypt in November 1952, recalled in a letter to the Wall Street Journal that sixty years earlier a Copt cited the phrase to his Jewish neighbour.[17][18]

A certain Royce Jones stated that it was a Jordanian slogan used on the eve of the Six-Day War, and that it expressed an intention to commit genocide on Christians.[19][20] Royce’s letter was cited by Yosef Tekoah before the UN Security Council as proof of the relief Christians in Bethlehem supposedly felt with the Israeli conquest of the West Bank. The Jordanian representative Muhammad el-Farra dismissed the use of the proverb as ‘cheap propaganda’ and cited as testimony Bethlemites affirming their allegiance to Jordan.[21]

According to blogger Gerald A. Honigman,[22] the phrase was first given prominent circulation in English by Bernard Lewis in the form: 'First the Saturday People, then the Sunday People,’ in an article written for Commentary in early 1976. Lewis claimed that the phrase was heard in the Arab world on the eve of the Six Day War (1967), and argued that recent developments in Lebanon suggested that the Arabs had reversed their priorities.[23

Because of their relevance for Biblical studies Palestinian proverbs have been the object of close attention.[24] The proverb in question does not figure among the 5,000 Palestinian sayings collected by the Bethlehem pastor Sa’īd Abbūd (1933), who, with regard to sayings dealing with Saturday and Sunday, mentions only one: ‘Saturday is longer than Sunday’, used with a variety of meanings: of the need to stay open for business given that Saturday is busier; of people who don’t know their own place, and to a woman whose petticoat is longer than her dress.[25]

Many sources register this proverb's appearance as an Islamic slogan daubed on walls or putatively on the Palestinian flag during the years of the First Intifada (1987-1997).[26][27][28][7] It was indicative of a tension within the Palestinian resistance as Hamas emerged to vie with the PLO for the hearts and minds of people. Historically, Christians have played a distinguished role in the Palestinian Arab nationalist movement since its inception.[29] The more secular and socialist PLO was able to attract and integrate support and leaders from the Palestinian Christian community like George Habash or Hanan Ashrawi,[30] though figures like Habash and Nayef Hawatmeh graduated to a more radical secular leftist politics.[29]

Mordechai Nisan of the Jerusalem Center for Public Affairs claims the slogan would have been used on a PLO flag when the Anglican Bishop Desmond Tutu visited the Holy Land in 1989.[27][31] Nisan opines that there is a Muslim-Arab war being waged against Israel and the Jews, and that Christians all over the world cannot escape being involved:


When the Muslim jihad pursues its Jewish victim, it manipulates and blackmails the West into submission. When the two tangle, the third party never escapes the consequences of the brawl.

Read entry in full
Posted by bataween at Thursday, November 20, 2014

May God bless you for this topic. Thank you Lord for Israel.