The contentious Jewish pilgrimage to the tomb of Rabbi Yaakov Abuhatzeira in the Nile Delta could become a thing of the past if an Egyptian court rules that the shrine be de-listed as a heritage site and the Rabbi's remains be transferred to Israel. (And yet the Egyptian authorities balk at transferring movable Jewish property, such as communal registers). From Elder of Ziyon: 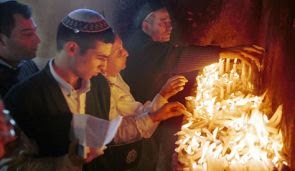 CNN Arabic reports that an Egyptian court set November 24 as the date for a hearing on the issue of the annual pilgrimage by Jews to to the burial place of Rabbi Yaakov Abuhatzeira, a prominent Jewish leader in the 19th century.

The administrative court in Alexandria will pass judgment in the lawsuit demanding an end to the Jewish celebration of Rabbi Abuhatzeira.

The lawsuit demands the removal of the shrine from the official list of Egyptian antiquities, and the transfer of his remains to Israel.

Lawyer Ahmed Attia said that "the Jews make this a new Wailing Wall for them in Egypt," charging that the celebration "includes acts contrary to the ethics of the Egyptian countryside and the Arab."

The Alexandria Court had ruled in 2001 to stop the celebration when villagers from around Damanhour complained. However, the Egyptian government overrode the court order and the celebrations continued up until the fall of the Mubarak government.

Visitors to tomb raise ire in Egypt
Posted by bataween at Sunday, November 02, 2014