Yemenite Jews were first in Silwan 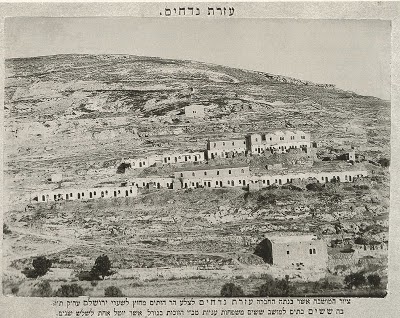 The fact that Jews have been moving into the 'Arab' village of Silwan, overlooking the old city of Jerusalem on its south side, has attracted media attention lately, much of it implying Jews are interlopers. But few reports have bothered to delve into the history of the area.

The approximately 50,000 Arab residents of Silwan call it Wadi Hilweh Street, after one of the neighborhood’s districts. The 700 or so Jewish residents call it Maalot Ir David Street, or “Ascent to the City of David Street,” after the adjacent archaeological site containing remains of King David’s Jerusalem.

The dispute over the street name is emblematic of tensions that have existed here since Jews first began acquiring property in the neighborhood more than 20 years ago. But they rose significantly last week after about 200 Jews moved into 25 apartments in Silwan in the middle of the night.

In fact Silwan (Kfar Hashiloah) was established for destitute Yemenite Jews in 1881. At first they were (ironically) supported by Christians, according to this 2008 article by Tamar Wisemon in the Jerusalem Post. Jews lived there continuously until the late 1930s, when the British mandate authorities urged them to evacuate their homes  since they could no longer protect the Jewish inhabitants from Arab attack:

In 1881, the Jews of Yemen heard that Jews had begun to return to Jerusalem and took this as a sign of the imminent arrival of the messiah. Their sages had interpreted the biblical verse "Let me climb the palm" (Song of Songs 7:9) as an allusion to the year of redemption, because the numerical value of the Hebrew word "the palm" - 642 - corresponded to the Hebrew year 5642 (1881/82). A few hundred of the poorest members of the community left Sana'a and several nearby villages. After an arduous journey by way of India, Iraq and Egypt to Jaffa, traveling by donkey, foot and boat, depleting all of their savings on the way, they arrived at Jerusalem.

"Although immigration from Yemen to Palestine continued almost without interruption until 1914, with 10 percent of the Yemenite Jews arriving during this period, these "foreign" Jews with their unfamiliar customs were met with distrust by both the established Sephardi and Ashkenazi communities of the Old Yishuv. After some miserable years within the protective walls of the Old City, destitute and scorned by their Ashkenazi neighbors, the Yemenites decided to establish their own community and began moving out to the hills facing the City of David, where they lived in caves, easy prey for attacks.

"Ironically, it was only when the Christian community began to focus its charitable work on this destitute group, that the Jewish establishment came to the support of their brethren. Philanthropists purchased land in the Silwan valley and built the small village of Kfar Hashiloah, popularly known as Kfar Hatemanim (the Yemenite village), in 1884. While the village attracted those who wished to return to the isolated, rural lifestyle they had lived in Yemen, the residents were still vulnerable to attack from nearby Arab villages and many preferred the safety of living close to the established Jewish community."
Posted by bataween at Wednesday, October 08, 2014

Email ThisBlogThis!Share to TwitterShare to FacebookShare to Pinterest
Labels: Jewish refugees in Palestine, Jews of Yemen

may be of interest