UNESCO has got the Jewish message 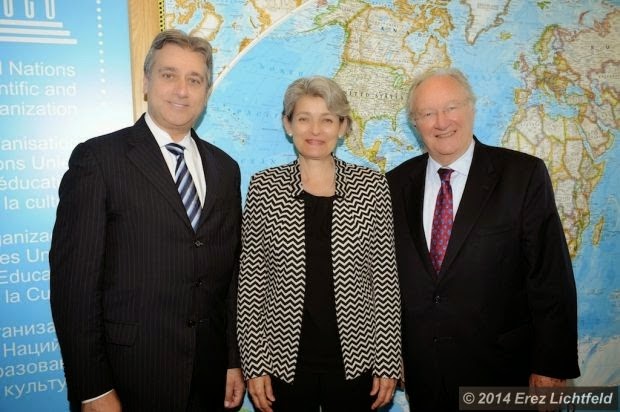 As the jihadist terrorists of the Islamic State (IS- also known by its Arabic acronym of DA'ESH) advance over swathes of Syria and Iraq, the UNESCO director general, Irina Bokova (pictured), has spoken of the need to take urgent action to protect Jewish  heritage in the Middle East.

“Islamic, Christian, Kurdish and Jewish  heritage, among others, is being intentionally destroyed or attacked in what is clearly a form of cultural cleansing,” warned Irina Bokova at a meeting held on 29 September 2014 at UNESCO's Paris headquarters. “We are gravely concerned about the scale of trafficking in cultural goods, from which Iraq has already greatly suffered over the past decade,”she said.

Campaigners for the rights of Jewish refugees say that Bokova's specific mention of Jewish heritage may have resulted from a meeting they had  in June to express their concerns about the destruction of Jewish sites in the Middle East.

"Our message has got through,"  Dr Stan Urman, executive director of Justice for Jews from Arab Countries, noted.

Dr Urman  welcomed the setting up of an multifaith Commission by UNESCO, one of the Jewish delegation 's key demands at the June meeting. On 17 July, UNESCO brought together leading experts and partners to launch an Action Plan for the Safeguarding of Iraq’s cultural heritage.

Participants at the 29 September meeting described how Iraqi cultural sites, like Jonah’s Tomb in Mosul, Assyrian palaces, churches and other monuments, are being destroyed and looted. Concerns are mounting that pillaged goods will be trafficked internationally. Protecting this heritage, even in conflict, is imperative, they insisted.

The French ambassador to UNESCO, Philippe Lalliot, echoed  a point which the Jewish delegation had made to Mrs Bokova in June: a conflict against culture is by extension an effort to erase the identity of a people.


“We may feel uneasy about denouncing crimes against heritage when horrifying acts of violence are being committed against people. Is it right to be concerned about cultural cleansing when the dead are being counted in the tens of thousands? Yes, absolutely,” said Ambassador Lalliot. “Because the destruction of heritage that carries with it the identity of a people and the history of a country cannot be considered as collateral or secondary damage that we can live with. It is on par with the destruction of human lives.”

Qais Hussein Rashied, Director of the Baghdad Museum, confirmed that DA'ESH were selling priceless artefacts through middlemen abroad "to finance terrorism.”
Iraq's ambassador to UNESCO, Mahmoud Al-Mullakhalaf, called on all States Parties to UNESCO’s Conventions, including the 1954 convention on the protection of cultural property in the event of armed conflict, the 1970 convention on illicit traffic of cultural goods, and the 1972 World Heritage Convention “to fight terrorism, defeat it and help us to restore our heritage.”

In collaboration with the Iraqi authorities, UNESCO has called for utmost vigilance from the world’s great museums, the art market, Interpol and other partner organizations in the fight against illicit traffic and has shared information relevant to Iraq’s cultural heritage with all parties involved in air strikes.
UNESCO has also requested that the Security Council adopt a resolution to outlaw all commerce of Iraqi and Syrian cultural goods.