Richard Silverstein, who runs an anti-Zionist site, has been having a field day today recycling the allegations that Israel exposed in the 1950s children with ringworm to life-threatening radiation. The allegations were  contained in a film made by two Sephardi Jews in 2004 but resurface from time to time. Not only does Silverstein charge that Israel killed 'tens of thousands' of 'inferior', scalp-infested Jewish children from North Africa as well as Palestinians, but he lumps both groups together as  'Arab', thus irritating  a number of Mizrahi commenters . The massive doses were administered by the shadowy Doctor Sheba in a campaign sinisterly reminiscent of Nazi eugenics. 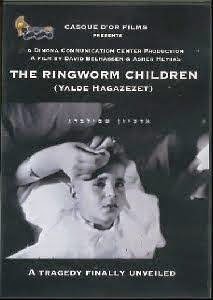 " There are a number of readers who are either confused or reading this post sloppily, including the headline.  To clarify: there is a link to a Jonathan Cook piece at the end of this post which notes that the State of Israel irradiated both Arab Jewish and Palestinian children for ringworm.  Hence the title of this post which uses the inclusive term, “Arab,” by which I include both Jewish and Palestinian children.

There are also those who claim that radiation was a standard treatment for ringworm inside and outside Israel in the 1950s.  This too misconstrues the argument put forward in the film and here.  While radiation may’ve been considered suitable for ringworm in that era, no one killed children with radiation outside of Israel.  The dosage set by Dr. Sheba was far too high and the X-ray machines he used were outmoded and hence the dosage administered could not be calibrated accurately or administered suitably."


Commenter Fred rides to the rescue:


So what really happened? The answer is that X-ray treatments were given to Sephardic youths, which long range problems were not known by the State at the time.

According to the medical literature 500 to 600 rem (or 1,000 times max dose) will sterilize you (and kill 35% of the victims after 30 days). That means there could not have been the next generation, and certainly this woman would never have had any children.

Also, in 1951 there were at most 20,000 Moroccan Jews in Israel. Yet in this poorly researched and obviously anti-Jewish documentary it states that 100,000 Sephardic children, of which Moroccans were the majority, were exposed to X-rays. Demographically speaking this could not have happened. Someone is guilty of an anachronism.

Ascribing present statistics to past events is one of the many mistakes or purposeful lies in this documentary.

Remember, back in the 50s radiation from x-ray machines was considered harmless. Shoe stores in America even had X-ray machines used for shoe-fitting that were a common sight in the late 1940s and early 1950s. It wasn’t until 1969 that the .5 rad maximum yearly exposure was determined
The dose given, in actual fact, was about 130 rads which at that time was considered safe. The medical world in the 50s, even outside Israel, was as yet unaware of the future damage involved in these radiation treatments; the connection between such treatments and cancer and other illnesses was discovered only years later. Xray treatment of the scalp for ringworm in the early 50s was considered by everyone to be safe. It was only years later that medical researchers in the US during the 1970s found an increased incidence of thyroid cancer among people who had been treated early in life with X rays for such conditions as acne, ringworm, and tonsillitis.

To allege that Dr. Sheba knew about the dangers 20 years before anyone else is absurd.

A debunking of the ringworm scandal myth
Posted by bataween at Tuesday, October 14, 2014

I spent part of my childhood in the USA. I remember that in the 1950s, kids loved to go to shoe stores so that they could put their feet in the special X-ray machines and see the bones in their toes.

And then they decided that it was not safe.

Silverstein does not report for the hate site Mondoweiss, he manages to demonize Israel all on his own. In fact, despite many attempts, no one can work with him.

Silverstein has on more than one occasion shown his racism, on his blog recently he called Mizrachim "hateful"

"Israel will increasingly become a poorer, more ultra-Orthodox, more settler, Mizrahi society (though of course Mizrahim will be emigrating as well). With this will come a rising tide of hatred, intolerance, ethnic division, and religious extremism. The IDF, already dominated by Orthodox-settler commanders, will become more so. If you think present-day Israel is extreme, the future promises even worse."

Roadie, apologies, one anti-Zionist site blurs into the next - Silverstein does not write for Mondoweiss and I have corrected the post.
It is very interesting how these radical leftists manage to be anti-Mizrahi yet at the same time presumptuous enough to dictate their 'Arab' identity.

Silverstein is a disgusting racist who relishes in provoking and offending Jews of the MENA. He has done it numerous times before and he'll do it again.

He is shamelessly exploiting the real tragedy of Jewish children immigrants from North Africa in the 50s to score Palestinian propaganda points, by erasing the real victims and dismissing their real suffering.

That Jew-for-hire is told over and over again that "Arab" has simply never been our identity, yet he maintains that it is. West knows best.

According to the British Journal of Medicine:
In 1948, the state of the art treatment for ringworm was x-rays, 400 r over 5 fields

TREATMENT OF RINGWORM OF THE SCALP

A year after, the recommended dose was 500 r (over 4 fields)

Sorry getting to you so late, but thank you for linking to my article (planck's constant), it's appreciated.