From its peak of 3, 000, the Jewish community of Kolkata in India is down to just 20, mostly as a result of a policy of Indian nationalisation. Yael Silliman is compiling a digital archive of the city's Jewish landmarks.  The Baghdadi Jews of Kolkata had more affinity with the Muslims than the Hindus: today Muslims are the caretakers of Kolkata's three remaining synagogues. Article in Al-Jazeera (with thanks: Tom Gross) 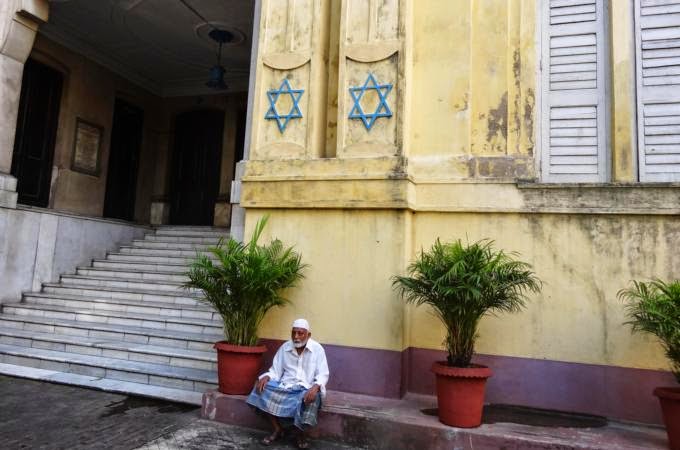 One of Kolkata's three synagogues. It takes a week to clean, say the Muslim caretakers [Priyanka Borpujari/Al Jazeera]

According to Professor Amlan Dasgupta from Jadavpur University, the realities of daily life are very different from the politics being played out, especially in Kolkata, which has always welcomed immigrants.

The city, he said, "is a product of the resulting multiethnicity and multiculturalism".

"Communal coexistence has been common across India and hence we don't think of it as important. Yet, there is also a problem in becoming conscious about it," Dasgupta told Al Jazeera. His students collaborated in the creation of the digital archive.

According to Silliman, the Jews and Muslims have a common history because of their roots in the Middle East.

"In Kolkata, Jewish families hired Muslim cooks because they ate only halal meat. Hindu families would not want to work in Jewish homes because of the meat being cooked. Our music, food habits are also very similar and people tend to forget that the Arab world is the seat of the Jewish community. Even the early immigrants looked like present-day Arabs, before they began to reflect a Judeo-British identity," she said.

It is no wonder then that the Jewish Girls' School's students are mostly Muslim.
According to Silliman, the area around the Jewish Girls' School, in its original location on Pollock Street, was where the affluent Jews once lived.
Today, the only remnant of a Jewish heritage in the school is the "Star of David" on the school uniforms, and having holidays on three Jewish festival days.

The Jews in Kolkata came from Baghdad about 220 years ago, and established themselves as successful businessmen. They were also major exporters of opium.
The Beth El synagogue was built in 1856 on Pollock Street to meet the needs of, at the time, a rapidly expanding community. Its construction was funded by two of the wealthiest men in the community - Ezekiel Judah and David Joseph Ezra.

In the 1940s, Kolkata's Jews began to leave because of the violence preceding the partition of the country into India and Pakistan. Fearing the loss of their businesses as India began to nationalise its banks after independence, they emigrated to western countries in large numbers. Today, there are just about 20 Jews left in Kolkata - the oldest resident died last month at the age of 97. 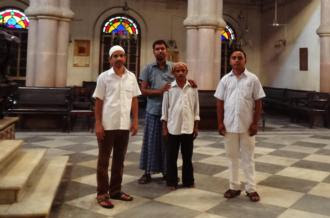 When academic fraudster Ilan Pappe turns to botany, Aleppo and Cedar pines planted in the Yativ forest to combat desertification get a brand new birth certificate: they were imported from Northern Europe ”by the Zionist settler” to give “new Jewish settlers the feeling that the place they had migrated to was somehow part of Europe”.

That gross perversion of factual knowledge was published on Mondoweiss because who else, but the Mondoweiss ignoramuses would uncritically gobble as gross a statement as this:

“The pine is generally a European species which before the 20th century was not seen in the Middle East.”

Not only does Isaiah mention the pine tree and the cedar tree in relation to the building of the Sanctuary in Jerusalem, but the Yativ forest pine species are
native trees in the Middle East and North Africa where their habitat stretches from Lebanon and Turkey to Morocco. The man who has decided for Jews of the Middle East and North Africa that they are ethnic Arabs has also decided that those same Jews have never set eyes on a pine cone in their former countries.

What’s more, his accomplice this time is an activist with a “master's degree in Sustainable International Development from Brandeis University ‘ but who has never heard of the tens of thousands of hectares of pines planted in southern Tunisia, Algeria, Morocco to prevent further encroachment from the desert.

so Pappe is joining shlomo sand is inventing history and science [besides inventing Jewish history as non-history, Sand denied the results of the many DNA studies on Jews of the various communities, Sefardim, Ashkenazim, Mizrahim, etc. Sand claimed that the DNA researchers were all secretly agents of the Israel govt (by insinuation)].

This is all interesting but what does this have to do with the synagogues in Kolkata?

As for the post about Jewish Kolcutta, I met a woman through a friend who attended the Jewish School, but she was not Muslim. She said it was a wonderful institution.

This things is so nice so sweet,
Africa real estate