Iraq lost the Jews, not the reverse

In this Huffington Post  interview with Usman Butt, a reporter for the Community Channel (see video clip) Emile Cohen gives an interesting perspective to the story of the Jews of Iraq. However, he tends to downplay Iraqi antisemitism, perhaps because he personally was spared the worst of it. See my comment below. (With thanks: Janet) 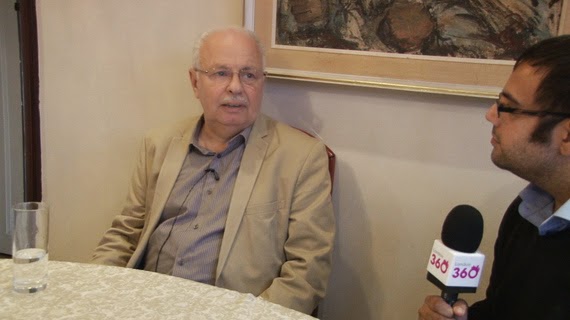 "The Jews were important constituents of Iraq, they participated in every facet of Iraqi society. At the end, the Jews of Iraq did not lose Iraq, Iraq is still with them- in their hearts. But Iraq lost the Jews and I think they are suffering from it now." Smiling at me from across his dining table, Emile Cohen serves the most important reason for understanding the Jewish Iraqi experience. Last summer's Gaza war and the ongoing situation with ISIS in Iraq/Syria- means we are in a period of profound regional transformation, some of which, threatens the existence of minorities in the Middle East.

One minority has already been largely eliminated form the Arab World and that is the Jewish minority. The expulsion/pressured removal of Jews from Arab lands took places during the last great regional transformation, which was in the 1950's and 60's during the European decolonization. Places like Iraq had been home to a Jewish community for over 2, 600 years, "Most of the prophets, Jewish prophets, were buried in Iraq. There are more prophets in Iraq than Israel, Iraq is more of a holy land, if you like, than Israel." Emile proudly told me.

But mingled with his pride, was a sense of great loss and sadness. Born in 1943, Emile attended a mixed Jewish, Christian and Muslim primary school and didn't feel different from the other boys. Only upon entering a Jewish secondary school did he begin to identify more with his Jewishness. Jews were classed as 'People of the Book' by Islam, but under Ottoman rule were made to pay a special protection tax to the Ottoman authorities. The special tax applied to all non-Muslims subjects and exempted them from military service, which was theoretically compulsory for all Muslim men.

Many Jews from Arab countries told me about the discriminatory laws in the Arab world, which rendered them Second-Class citizens and many tied it into a universal narrative about Jewish suffering, not too different from the European Jewish experience. However, Emile strongly disagreed with this assertion and while he acknowledges discrimination did exist, he found the comparison with the Jewish experience in Europe quite perverse. "We do not compare that (what happened to us) with what happened in Europe. Nowhere near. Not just the Holocaust, but even the pogroms (anti-Jewish riots) that took place in Russia, Poland and all these places. They cannot be compared."

In 1941, Baghdad saw an outbreak of anti-Jewish feeling and it led to an anti-Semitic riot and many Jewish businesses were destroyed. Some people called this incident an Iraqi pogrom or even the Arab version of the Kristallnacht, Emile asserted that it was a 'kind of pogrom', but nothing comparable to the pogroms of Europe. He cited that while many people died, it was not on the scale of Europe and that it was a result of a break-down in-law and order, no government and the British authority, who ruled Iraq, lack of interest in preventing rioters. Interestingly, he traces back the rise of anti-Semitic tensions to the late 1930's and not to historical 'ancient hatred' that characterized European anti-Semitism.

"We had a problem with pan-Arab nationalism, because they could not differentiate a Jew from a Zionist (A glib explanation: Jews were not the only victims, eg Kurds, Assyrian Christians - ed) ." But unlike in Europe, no Holocaust took place in Arab lands, "The people of Iraq were not like that." Emile went on to describe what Jewish life was like in Iraq, the food, the language and especially the music. Many of Iraq's great musicians were Jewish, but nobody knew that they were Jewish and nobody really cared. Emile was officially de-naturalized from Iraq, while living and studying in England in the 1960's. Iraq came under Ba'athist rule and the antagonism towards Israel, saw many Arab countries turning against their Jewish communities. In the end, they were forced to leave or were physically expelled and they took with them 2, 600 years worth of culture and tradition.

My comment: Emile is correct that antisemitism in the Muslim world was not on the scale of what Jews experienced in Europe, but that does not mean that Arabs/Muslims were more tolerant. When they did strike, pogroms were every bit as lethal. The Farhud was not 'a kind of pogrom' - it was a pogrom, and more Jews died on 1st and 2nd June 1941 in Baghdad than during Kristallnacht. Emile tends to minimise anti-Jewish hostility in Iraq, but admits he himself experienced state-sanctioned discrimination, having been stripped of his nationality while a student in England. He never lived through the period of Ba'athist terror at the end of the 1960s.

Several mistakes here by both interviewer and interviewee. Of course, the Farhud was a real pogrom and worse than Kristallnacht, as you point out. It also killed more Jews than the Kishinev pogrom of 1903 [approx. 50] which was a turning point of sorts in the history of Jews in the Russian Empire.

The Jewish exodus from Iraq had nothing to do with decolonization. The British, as said in the article, allowed the Farhud to proceed, for example, and the UK also encouraged Iraq to fight Israel in 1948.

Lastly, the jizya tax is described incorrectly as if it only applied in the Ottoman Empire. It was applied throughout the Islamic world on non-Muslims, and was hardly meant merely to remove the duty of army service from those who paid it. Its roots can be found in the Quran in sura 9:29

Good points, Eliyahu. There was an element of decolonisation, however, behind the Farhud, I would argue - Iraqi nationalists strongly identified with the Germans because they were the enemy of the British colonial masters - and who were the 'lackeys' of the British in Iraq, the mainstay of the colonial administration? the Jews.
The jizya did indeed apply throughout the Muslim world but exemption from army service was not the privilege Emile makes it sound. In any case Jews had to serve in the Ottoman military from 1914.

Yes, Jews worked for the new Iraq set up by the British. Such as the first finance minister of the Iraqi kingdom. But the British were prime movers behind the establishment of the Arab League which they pressed for during the war. Are we to call the Arab League a colonial institution? If you like, I will agree to do it. But it is rather a paradox, is it not?

Btw, Anthony Eden, foreign secretary at the time, gave a speech calling for an Arab League just a day or two before the Farhud. Some say that that may be why he kept British troops from putting down the Farhud pogrom.

btw, Eden as foreign sec'y was also in charge of the BBC's foreign reporting. He was responsible for holding back vital info about the ongoing Holocaust in occupied countries.

Your comment
Whilst I did not live in Iraq through the Baath regime I am fully aware of its horrors and my family were there till 1970 when they fled. Some of the blogs are by people who never lived in Iraq but that does not invalidate their comments.

As to the issue of the Kurds you need to be aware that the Kurds were calling for independence even before Iraq was formed in 1921. Sheikh Mahmoud Barazani led a rebellion in 1919 which was crushed by the British but given a promise of Kurdistan which he actually ruled till 1924. The first insurrection took place before the concept of Arab nationalism was introduced in Iraq.Arab nationalism in Iraq was basically directed against the Jews in the 1930s and 1940s.

Promises of national political rights were made to the Kurds in one of the post-WW One treaties. Was it the treaty of Sevres or the treaty of Lausanne? Can't remember now. But as we know, as Jews know, or should know, all too well, the British empire made many promises to many peoples that it did not keep, and may have never intended to keep.