How a Baghdadi Jew transformed Shanghai

There is no monument to Sir Victor Sassoon, the Baghdadi Jew who changed the face of Shanghai in the 1930s. But he left his mark in several landmark buildings, including the Peace Hotel, whose Art Deco splendour has been revived. Fascinating article by Taras Grescoe in the New York Times (with thanks Dan and Lisa): 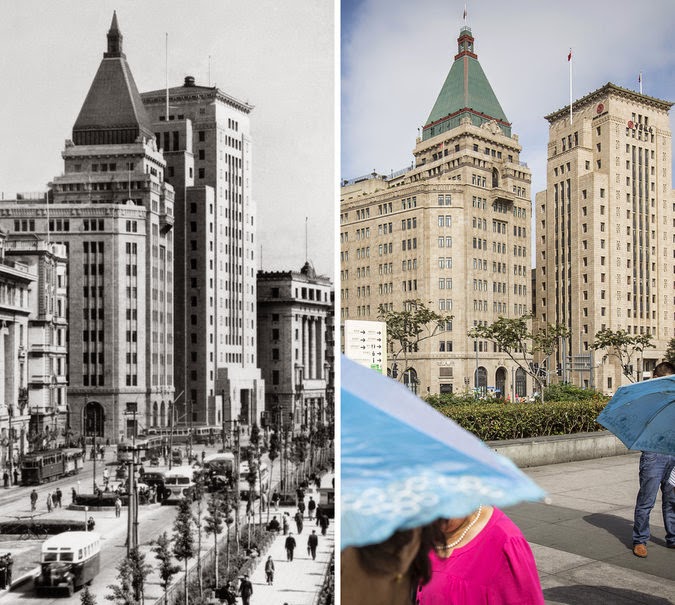 The Peace (Cathay) Hotel as it was in the 1930s, and as it is today (Photo: Hsinhua agency/Qilai Shen)

Until recently, the name Sassoon — or, more exactly, Sir Ellice Victor Sassoon, the third baronet of Bombay — had been all but effaced from the streets of Shanghai. The scion of a Baghdadi Jewish family, educated at Harrow and Cambridge, Sassoon shifted the headquarters of a family empire built on opium and cotton from Bombay to Shanghai, initiating the real estate boom that would make it into the Paris of the Far East.

The 1929 opening of the Cathay Hotel (its name was changed to the Peace in the mid-50s), heralded as the most luxurious hostelry east of the Suez Canal, proclaimed his commitment to China. (He even made the 11th-floor penthouse, just below the hotel’s sharply pitched pyramidal roof, his downtown pied-à-terre.) Within a decade, Sassoon had utterly transformed the skyline of Shanghai, working with architects and developers to build the first true skyscrapers in the Eastern Hemisphere, in the process creating a real estate empire that would regularly see him counted among the world’s half-dozen richest men. Within two decades, the red flag of the People’s Republic was hoisted over the Cathay, which would for many years serve as a guesthouse for visiting Soviet bloc dignitaries.

Yet, over the course of the years, Sassoon’s buildings, apparently too solid to demolish, continued to stand, so many mysterious Art Deco and Streamline Moderne megaliths in a cityscape growing ever grimier with coal dust. As Shanghai once again takes its place as one of Asia’s fastest-growing metropolises, and supertall, 100-plus-story towers define its new skyline, there are signs that the city is beginning to value, and even treasure, its prewar architectural heritage. Sir Victor would have appreciated the irony: The landmarks of Shanghai’s semicolonial past, vestiges of a once-reviled foreign occupation, have lately become some of its most coveted addresses.

Read article in full
Posted by bataween at Sunday, October 05, 2014

Email ThisBlogThis!Share to TwitterShare to FacebookShare to Pinterest
Labels: Jews of China