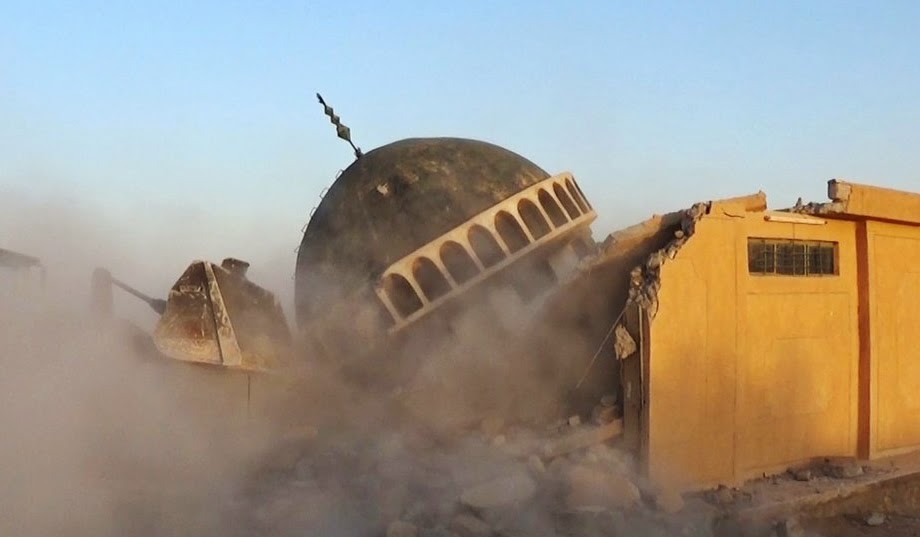 A shrine bulldozed in Iraq

Letting despots and ideologues control artefacts and sites treasured by other religions,  as a gesture of goodwill, does not work. Maybe it's time the civilised world changed its policy, argues Josh Gelertner in National Review:

It’s been a good autumn for human artifacts in the civilized world. It’s been a very bad autumn for human artifacts in the uncivilized world. (Oh what a fall was there . . .) As the New York Times reports, the Islamic State, and friends, “are deliberately wrecking shrines, statues, mosques, tombs and churches — anything they regard as idolatry.” Shrines, etc., which range in age from very old to ancient.

In the Near East, ancient history is thick on the ground. But wanton destruction of ancient history hasn’t been confined to Iraq or Syria. In 2001, two 2,500-year-old monumental Buddhas in Afghanistan were blown to bits by the Taliban. Last year, a 3,000-year-old Philistine harbor was bulldozed by Hamas to expand a training ground for its al-Qassam terror brigade. As of last year, according to the U.K. Independent, “Islam’s most holy relics are being demolished in Mecca,” in order to transform the “dusty desert pilgrimage town into a gleaming metropolis of skyscrapers.” This a theme in the wild wild east, and not a new one.

When the Arab Legion occupied Jerusalem in 1948, the Great Hurva Synagogue was mined and destroyed, along with 57 other Jewish shrines and libraries. An ancient Jewish cemetery was ransacked, paved over, and turned into a parking lot; its grave-markers were used by Palestinians to build latrines. Civilized people were shocked this summer when they heard that mosques in Gaza were being used to store munitions. It may have been shocking, but it had precedent.
The Parthenon — the greatest ruin on Athens’s Acropolis — was ruined quite recently (in Greek terms). When the Ottomans captured Athens in the 15th century, the intact, 2,000-year old Parthenon was turned into a mosque. The mosque doubled as a munitions depot. During a war with the Venetian Empire, the Parthenon-Mosque-arsenal caught fire and exploded.

The practice of one religion usurping another’s holy places isn’t new. The Parthenon also did service as a church, and the Hagia Sofia mosque-museum, such as it is, was once the greatest church in Christendom. The Dome of the Rock and the al-Aqsa Mosque are built on the ruins of the Jewish Temple, the holiest site in Judaism. The second holiest site in Judaism, the Cave of the Patriarchs, is marked with a stone basilica built by ancient Israel in the time of Jesus. Now it’s a mosque too. Jews are banned from conducting religious activities at the Cave and the Temple Mount, although they’re both in Israel. As a gesture of goodwill to the Muslim world, Israel handed control of both to Jordan’s Waqf religious authority.

Needless to say, no goodwill has been forthcoming. Recent Muslim construction on, and inside of, the Temple Mount has destroyed structures that are older than Islam. When Israel dared include its Cave of the Patriarchs on a list of its heritage sites, there was international outrage – the incensed U.N. described the Cave as “an integral part of the occupied Palestinian Territories.” Evidently the U.N.’s gaze has not fallen on Saudi Arabia, which (according to Washington’s Gulf Institute) has used the last 20 years to demolish 95 percent of Mecca’s thousand-year-old buildings. For the powers-that-be in the Near East’s theocratic tyrannies, history — their own, and other people’s — is a bargaining chip, and nothing more. But to the civilized world, these chunks of history — Christian, Jewish, Muslim, Buddhist, and pagan –are immensely valuable.

Israel lets despots defile its most cherished treasures because it’s willing to pay a very high price for peace. Since no peace is forthcoming, it might be time for a policy change. Since no peace is forthcoming in Islamic State territory either, it might be time for some new policy there as well. As the Nazis started to lose the war and withdraw to Germany, we did what we could to keep them from destroying Europe’s art. Maybe we can contain the Islamic State, but the territory we contain them on will have its history erased along with its people. We ought to save the people, and remember that there’s more history there than anywhere else.

UNESCO has got the Jewish message
Posted by bataween at Monday, October 20, 2014

My father used to say that the more you did for people, the less you would be respected by them and that you had to impress on anyone you did a favour for, that you were doing something that you were not obliged to do and that something was expected in return.

Only shows how you gove a finger and they want a whole hand. But the rest of the world is far to dense to see it until they come to Europe and America and finally see it for themselves, when it will be too late