Decline and fall of Syrian Jewry

Useful history of the Jewish community of Syria from its Biblical origins to the present day at the Aish website. Syrian Jewry's most notable contributions were the Aleppo Codex and their unique tradition of liturgical singing. (With thanks: Michelle) 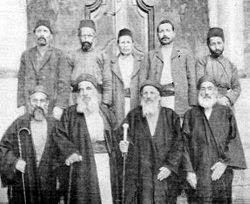 Syria boasts one of the world’s oldest Jewish communities and one of the world’s richest and most storied Jewish cultures. Syria has a history that dates back to Biblical times, and its Jews have survived the countless empires that have conquered it. That once thriving community has been reduced to some 50 members (probably fewer than 20 - ed) that face rampant civil war, repressive government measures, and limited economic opportunities.

Syrian Jewry’s illustrious past began thousands of years ago during the time of Ezra the Scribe, who was tasked with appointing judges in Syria by the Persian king Xerxes. Jews gained significant privileges under the Greeks and Romans, and sent lavish offerings to the Second Temple in Jerusalem. The Jewish sages held Syria and its Jewish population in such high regard that they applied the same land laws to Syria as to Israel: as it says in the Mishnah, “He who buys land in Syria is as one who buys in the outskirts of Jerusalem” (Hallah, 4:11).

The main center in ancient Jewish Syria was Damascus, now the capital of the Syrian Arab Republic and quite possibly the oldest continuously inhabited city in the world. Damascus is referenced in the Hebrew Bible, as well as the Talmud and Dead Sea Scrolls, as Dammesek. King David campaigned against the Arameans there, and the city was later conquered by the Assyrians, Persians, Greeks, and Romans. As in the rest of Syria, Jews fared particularly well. Damascus became a major economic hub in the Levant. According to the sage Resh Lakish, the city could be one of the “gateways of the Garden of Eden” (Er. 19a).

As the Roman Empire transformed into the Christian Byzantine Empire, it found itself constantly at war with the Persians over the possession of Syria. Eventually, Persia conquered Syria and Israel with the help of Jewish supporters who had resented the exorbitant privileges Christians enjoyed under Byzantine rule.
In 635, Syria fell under the control of the Arabs, who had recently united under the banner of Islam. The Muslim Umayyad empire chose Damascus as its capital and the city prospered once again. Many Jews held high positions during the early years of the Muslim empire including Manasseh ibn Ibrahim al-Qazzāz who was in charge of finances during the Shi’ite Fatimid era of the late 10th century C.E. Damascus became a center of Talmudic study, establishing an academy that had close ties with its counterparts in the land of Israel.

Aleppo Codex (Deut)" by Shlomo ben Buya'a – http://www.aleppocodex.org Photograph by Ardon Bar Hama. (C) 2007 The Yad Yitzhak Ben Zvi Institute.
The second major Jewish center in Syria was Aleppo. Jewish activity there dates back to the 4th century C.E. with the building of the Kanisat Mutakal, the oldest Jewish structure in Aleppo. As Aleppo became the center of Jewish learning in Syria, several notable figures including Saadiah Gaon and R. Joseph b. Aknin (the Rambam’s disciple) made their way there from Israel to see the Aleppo community’s erudition and first-hand. They could not have been disappointed for the Jewish scholars of Aleppo were responsible for producing one of Judaism’s single most important documents and Syrian Jewry’s single greatest achievement: the Aleppo Codex.

The Codex is the most authoritative and accurate of the Masoretic Texts which form the basis for the modern Hebrew text of the Bible. The manuscript was safeguarded in the basement of the Central Synagogue of Aleppo for many centuries until the anti-Semitic riots of 1947 when more than half of the Codex was destroyed. What remains of it now lies in Jerusalem’s Shrine of the Book along with the Dead Sea Scrolls. Syrian Jews, particularly those in Aleppo, also gained acclaim as musical innovators, developing a unique liturgical tradition known as maqam or melodic pattern. The style developed in Aleppo now serves as the foundation of contemporary religious music for the Mizrahi community in Israel.

Read article in full
Posted by bataween at Tuesday, October 07, 2014

WHY IN HEAVEN'S NAME DID THEY STay THERE,
They believe in miracles?
Once the apple is infected it cannot go back to it'd initial goodness!
sultana"

Re the Aleppo Codex. It was produced in Tiberias [10th century] in Israel and was brought to Egypt before going to Aleppo. Further, the fire set in the synagogue in Aleppo did not destroy the codex or even half of it. That is another story.

The school of scribes and copyists in Tiberias produced many copies of the Scriptures besides the Aleppo Codex. They set the textual tradition which is mainly followed today.