In August this year, it was announced that the restored Maghen Avraham synagogue in Beirut was set to re-open. No matter how hard Charlie Zarur, an expatriate Lebanese Jew,  tries to spin Maghen Avraham as a reminder of religious coexistence, rumours of a Jewish renaissance in Lebanon seem wildly over-optimistic. Adam Rasmi writes in Foreign Affairs: 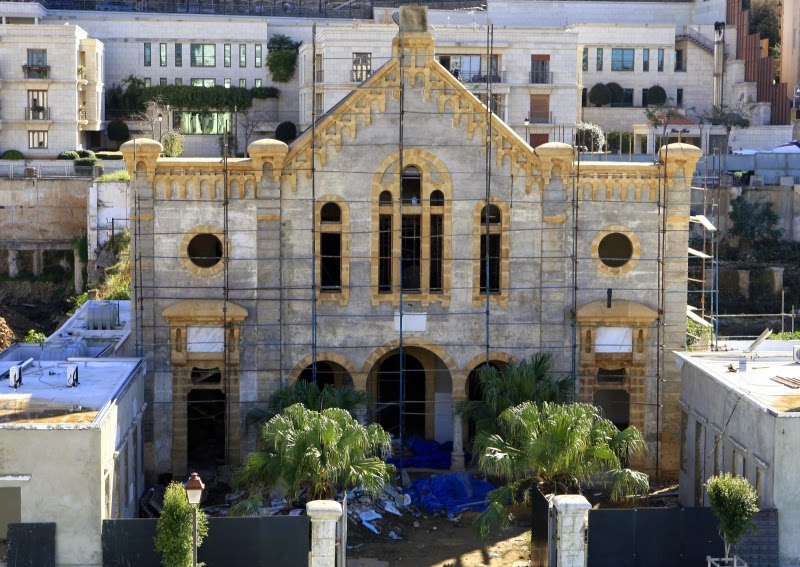 It was in 2008 that Isaac Arazi, the leader of Lebanon’s Jewish Community Council, first initiated a project to restore the synagogue. The Lebanese Jewish diaspora -- including the Safras, a prominent banking family -- led the fundraising drive. Non-Jewish Lebanese also made contributions. Solidere SAL, a real estate firm set up by the Hariris, a Sunni family prominently involved in politics, pledged $150,000, an amount it also offered to other religious groups restoring places of worship in the area. In total, the restoration cost between $4 million and $5 million.

Crucially, all of Lebanon’s major political parties offered rhetorical support to the reconstruction efforts. Even Hezbollah, the Shiite party-cum-militia, which has fought a series of skirmishes and wars with Israel since the 1980s, has said it welcomes Lebanese Jews. As Ghassan Moukheiber, a member of parliament with the March 8 coalition, explained, “The synagogue underlines the distinction that must be made between Judaism and Zionism.”

Maghen Abraham’s restoration comes at a time when Lebanon has seen an uptick in sectarian tensions that have worried people from all sects. The Islamic State of Iraq and al-Sham (ISIS), an  extremist group that denies the legitimacy of present-day borders separating states in the region and is opposed to all forms of religious pluralism, has recently made inroads into Lebanon, the Arab world’s most diverse country. In August, ISIS overran the northeastern Sunni border town of Arsal; in response, the Lebanese army attacked the area in order to push out the group. Thirty-five officers were kidnapped in the ensuing clashes, and ISIS has since beheaded two.

The reopening of Maghen Abraham is thus a much-needed reminder of religious coexistence. The symbolism transcends the precarious status of Lebanon’s small Jewish population. “When you have Daesh [ISIS] cutting off heads, Lebanon is fixing synagogues. . . . This is not something to be understated,” said Moukheiber. Charly Zarur, the grandson of Miriam and Elias, echoed his views. He said the reopening of the synagogue is above all about reviving the spirit of brotherhood among Lebanon’s Muslims, Christians, and Jews.

Although the Jewish community is a long-standing part of Lebanon’s history -- Judaism is one of 18 sects officially recognized in the national constitution -- it has been missing from the collective consciousness in recent decades. Indeed, given that most of the Lebanese population was born after 1975, few Lebanese Christians or Muslims today even have memories of coexistence with Jews. Some Lebanese have argued that the opening of the synagogue might widen their understanding of the country’s pluralism. “It will remind everyone, including legislators, that when dealing with various communities living in Lebanon, there are not only Christians and Muslims . . . but Christians, Muslims, Jews, and others,” said Moukheiber.

But Zarur also cautioned that, contrary to the claims made by Arazi, it’s unrealistic to expect the opening of the synagogue to inspire a revival of the Jewish community to its former strength: “If at some point Israel and Lebanon establish relations, it is possible. But not until then.” Although there are four other synagogues scattered across Lebanon -- in Bhamdoun, Deir al Qamar, Sidon, and Tripoli -- all are derelict or have been closed for decades. There is little prospect that any will open anytime soon. Moreover, those in Lebanon’s existing Jewish community have become accustomed to keeping a low profile, often concealing their names and religion in order to avoid ostracism or hostility.

The Lebanese government has also rarely made it a priority to reach out to Lebanese Jews. Nabil de Freige, the member of parliament elected to the one seat earmarked for “minorities” -- which includes six Christian sects and the Jewish community -- conceded in a 2011 interview that he was unable to locate a single Lebanese Jewish representative. The community is afforded similar rights as other citizens but in official records is referred to as the Ta’ifiya al Israiliya -- the Israeli community. The term predates the founding of the state of Israel in 1948 and is a holdover from the French mandate period. Hoping to make clear the distinction between Lebanese Jews and Israelis, then Minister of Interior Ziyad Baroud proposed a draft law in 2009 to affirm their rights and distinguish them from the “subjects of an occupying entity.” The proposal never became law.

The Jewish community does have an official mukhtar -- a traditional village  leader appointed by the community -- but even he is not a member of the Jewish faith. The last Jewish mukhtar left Lebanon in 1978, and a Muslim by the name of Bassem al-Hout now holds the post. Hout, who inherited the job from his father, grew up among Lebanese Jews and handles the legal aspects of births, marriages, and deaths for what remains of the community. He declined to comment on specific individuals, upholding their privacy and decision to maintain a low profile.

Legal administration aside, there must be a functioning synagogue or gathering place for a Jewish presence to endure. The physical condition of Maghen Abraham may be nearly restored after decades of disrepair, but there are no rabbis available to officiate services in the country. (The last chief rabbi, Yakoub Chreim, left Lebanon in 1978.)

Moreover, members of the community -- like all other Lebanese -- who wish to enter the synagogue will face onerous security measures. The residence of Saad Hariri, head of the March 14–affiliated Future Movement and son of slain former Prime Minister Rafiq Hariri, is adjacent to Maghen Abraham. Armed officers and steel barricades surround the entry points to the site; only those who possess special permits are allowed to pass.

Yet Lebanese Jews still emphasize that Lebanon is a place of relative tolerance. About 2,000 Lebanese Jewish émigrés and their descendants enter and exit the country yearly, and they recall fond memories of life in Beirut. As Zarur pointed out, despite the administrative issues and political sensitivities related to addressing the needs of Lebanon’s tiny Jewish population, Lebanese Jews have coexisted with Muslims and Christians for centuries. In the case of his family -- and like many Levantine Jews -- the lands that now make up the states of Lebanon and Syria long ago offered them safe haven after the Spanish Inquisition expelled all Jews from that country in 1492.

What is more, Zarur added, if countries such as Spain can offer a path to citizenship for the descendants of Jews expelled over 500 years ago, then there is still hope that Lebanon might similarly open its arms in the future. “Maybe a generation is all it will take for us to return,” he joked. But until then, the restoration of Maghen Abraham, no matter when it finally reopens, will have to suffice as a symbolic gesture.

Read article in full
Posted by bataween at Friday, October 17, 2014