What really made Moroccan Jews leave? 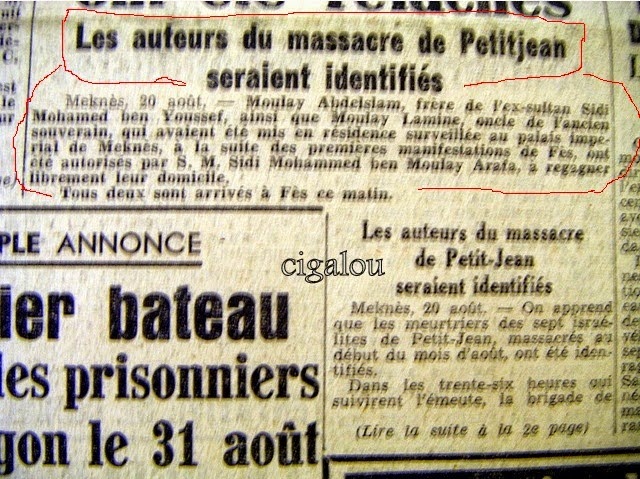 A press cutting reporting the Petit Jean massacre of 1954


The Petit Jean massacre 60 years ago,  the subject of a blogpost in the Times of Israel by Lyn Julius, has elicited an interesting reaction from those who have always believed that Moroccan Jews did not leave for Israel as a result of antisemitism, but out of ideological reasons (see below):

Last month, at the height of the Gaza war, French Jews in a Paris synagogue were shocked to find themselves the target of a near-pogrom by an enraged mob. And not only in France. Attacks on Jews in the UK went up 500 percent. Germany, Italy and Australia saw a worrying rise in anti-Jewish incidents too.

Jews in the West have been dismayed and traumatised: campaigns against antisemitism have been launched, demonstrations called. Leaders are hastening to distance diaspora Jewry from Israel in the hope that Jews will not be targeted for violence.

In fact ‘collective punishment’ of Jews is nothing new to Jews who originate from Arab and Muslim countries.

Sixty years ago last month a massacre occurred that actually had nothing to do with the Arab-Israeli conflict.

The massacre of Petit Jean (now known as Sidi Kacem) may surprise those who extol Morocco as a model of Muslim-Jewish coexistence.

In a private exchange, Lyn Julius responded to a reader who claimed this article marked a serious revision to the history of Jews from Arab lands. Even Moroccan Jews themselves, and the new centre for Moroccan Jewry in Jerusalem, he asserted, make no mention of events such as the Petit Jean massacre. She replies:

The period just before independence must have been very difficult for Jews, with regular outbreaks of violence - as well as Petit Jean, five Jews were murdered in Oujda in 1953 and seven in Wadi Zem in 1955. This must have made Jews want to leave but the gates were slammed shut as soon as Morocco got independent.

In fact Morocco has the worst record for pogroms of all Arab countries in the late 19th and early 20th century, culminating in the major pogrom of Fez in 1912 which 45 - 60 Jews died.

Also in Morocco the dhimmi status, with its ritual humiliations and exactions, was still being applied to Jews into the 20th century, long after it had been abrogated in the Ottoman empire, and the country had a dismal record of forced conversions and abductions of Jewish women. Having said that, independent Morocco never passed discriminatory laws against Jews and did not expropriate their property, although fleeing Jews left many of their assets behind.

In addition, the impression of Morocco as the model of Muslim-Jewish coexistence has emerged because the King has invested heavily in a PR campaign to project an image of Muslim-Jewish harmony to a) encourage tourism and b) gain brownie points with the US and legitimacy for its invasion of Western Sahara.

Jews themselves often confuse the issue by expressing their affection and loyalty to the Moroccan monarchy, not least because of the role the wartime sultan was supposed to have played in 'saving' them from Nazism. But no less than the head of the Moroccan Jewish organisation in Israel, Dinah Levin, has compared the plight of Morocco's Jews to a Nakba.

Posted by bataween at Thursday, September 04, 2014

Most Moroccan Jews are happy that *today* Morocco is pretty welcoming for Israelis and Jews. Don't confuse this with the question of why they left in the first place. An entire community of 250,000 doesn't just get up and leave its country of bith unless it feels threatend, and Moroccan Jews had good reasons to feel that way.

off topic/
The Judeophobia among the Iranian Left in exile.