The left's blindspot for Iranian Jews

The Iranian intellectual left in exile has latched on to popular leftwing causes like the Palestinian cause, without paying the slightest attention to the great injustice taking place under their very noses: the loss of their own age-old Jewish community. Important essay by Roya Hakakian in The Tablet. (With thanks: Eliyahu) 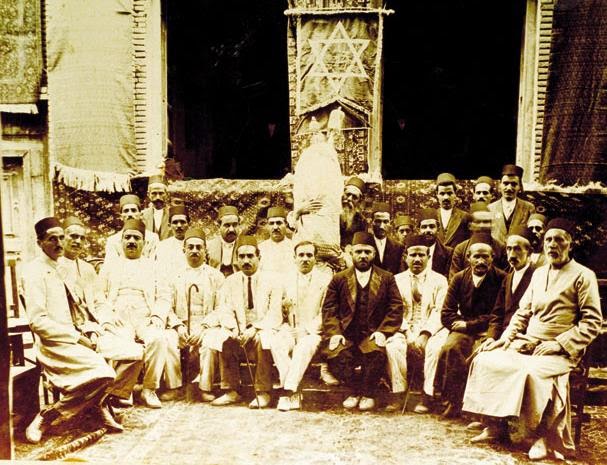 Jews in Hamedan in 1918. They have now disappeared

These friends got me to replace my petty anxieties with much grander ones. I was to preoccupy myself with the plight of the mineworkers of Bolivia, pray for the struggling Sandinistas in Nicaragua and the Northern Ireland nationalists, keep alive the memory of Native Americans, and march on behalf of the displaced Palestinians. Somehow this proved the best antidote for the discontented adolescent at the time.

But even at the time, it puzzled me why the dwindling community of Iran’s own Jews never fell within the otherwise generous purview of their concerns. In 1977, that ancient community had more than 100,000 members. Today fewer than 10,000 remain. Such drastic diminishment of any population in the West would surely place that community on the endangered list, warranting the issuing of buttons and stickers, pasted on car bumpers and the binders of idealistic freshmen in colleges. But somehow Bolivia was closer to the hearts of my compatriots than Ju-bareh, the Jewish district of their own Isfahan, where, as it happens, Jews had, indeed, built underground tunnels to alert each other when pogroms broke out.
***
The extinction of a community to which Iran owes so much of its distinction as a non-Arab nation, a distinction so important to the Iranian sense of self, has never been recognized by Iran’s elite, nor eulogized, for with the loss of the Jewish community Iran’s claim to tolerance and Persian-ness will be harder to sustain. And so a nearly 3,000-year history is ending in silence. The Jews who had aspired to anonymity throughout their life in Iran are becoming extinct in anonymity now. If Mahmoud Ahmadinejad did not manage to wipe Israel off the map of the world, his revolution surely has just about wiped the Jewish community off the map of Iran.

Of the 90,000 Iranian Jews who have been displaced since 1979, possibly half emigrated to Israel. These were the less-well-off Jews, the “proletariat” of the community who could not afford to go elsewhere. My aunt and her family were among them. In January 1979, in a town called Khonssar, an angry mob of anti-Shah demonstrators set fire to the fabric shop the family ran. In the rolls of fabric they kept in the store, they had tucked their life’s savings in cash. When the shop burned, so did their future. And so did their home, for they lived on the story above.

In the thousands of posts that avid secular Iranians have placed on social media since the start of the recent war in Gaza, as in the numerous articles they penned, statements they signed and speeches they gave over the years, there has never been a mention of their own uprooted Jews. Palestine, they have consistently demanded, must be returned to the Palestinians. But not once a contemplation on what was to become of those who made their home there because the revolution they helped usher into the country drove them out of their ancient homeland.

Reams of translations and invocations of the literature of wronged communities—of poetry of Langston Hughes, for instance, and of the suffering of African Americans under slavery—but not a word about the gas chambers of the Nazis. In what they have not done, this so-called Iranian leftist vanguard is denying the Holocaust just as much as the president they opposed did.

In the thousands of posts on the “apartheid” in Israel, there has been none about the apartheid in Iran, the one where Jews (like other non-Muslims) cannot testify in a criminal trial against a Muslim. Thousands of posts on the alleged genocide committed against the Gazans, not a word about disappearance of Iranian Jews from Hamedan, for instance, where of the rule of the Jewish Queen Esther, only an abandoned tomb remains. The wrongs done to the Jews of Iran do not wash away the wrongs done against the Palestinians. But how can the necessity of Israel as a Jewish homeland be so readily dismissed by those who have been the culprits of the displacement and extinction of a community of their own?
(My emphasis)

It is far too easy to resort to “anti-Semitism” as the explanation for what is ailing my compatriots, though it cannot be ruled out. Having observed them for as long as I have known them and myself, I have come to see their profound loss as the single most formative, and tragic, force of their lives. Once the Young Turks of their own era, they are now reaching the end of their lives in Iran or in diaspora, their destinies determined and ruled by a lesser sort—less educated, less erudite, less debonair, less sophisticated: mullahs who outwitted them in a Trojan moment. The innocuously turbaned giant they allowed into the country in February of 1979 proved to be their archenemy. They lost Iran, then they lost their hope in the Soviet Union as a utopia. Of all the things that used to define, bind and unify them, nothing is left today.

Nothing, that is, but their antagonism to Israel. Israel is the one cause around which their disarrayed lot can still unify, to reclaim a modicum of their old revolutionary glory. And it is cost-free, too. So many of these aging and ailing opposition figures, who had sworn off traveling to Iran until the mullahs were gone, are now dual citizens, returning to the bosom of families and communities after decades of separation. To keep their travel privileges, there is much that they keep silent about. But bashing Israel and the Jews, where their convictions miraculously overlap with those of the archenemy—well, that gets their passports renewed. Besides, for the more visible figures, it may even land them an interview or two on national television.

In the meantime, several promising signs point to a different attitude emerging among average Iranians, as documented in the latest ADL’s report on the state of anti-Semitism globally. A far more pragmatic generation, disenchanted with the regime and even more so with their “enlightened” predecessors, is rising throughout Iran.

Read article in full
Posted by bataween at Friday, September 05, 2014

Email ThisBlogThis!Share to TwitterShare to FacebookShare to Pinterest
Labels: Dhimmitude, Iranian Jews in US, Jews of Iran, Leftist bias against Jewish rights

First of all it's not blindness, it's clear eyed hatred. Secondly, no one outside of the rose colored fools of brie munching liberals in the west didn't know this already for decades.

The leftist Iranian Tudeh party was liquidated by the Khomeini regime, allegedly using information supplied by the CIA which originated from Israeli security agencies. Many hundreds of its cadres were executed.

For some reason I don't feel bad about it at all.

Ben, the USA supported Khomeini's takeover of Iran in 1979. So it is no surprise that the CIA gave info to Khomeini's regime. On the other hand, why did the CIA have to get info about the Tudeh from Israel? Didn't the CIA have its own sources in Iran? Didn't the Shah's Savak know who belonged to Tudeh? Didn't Savak share info with the CIA?