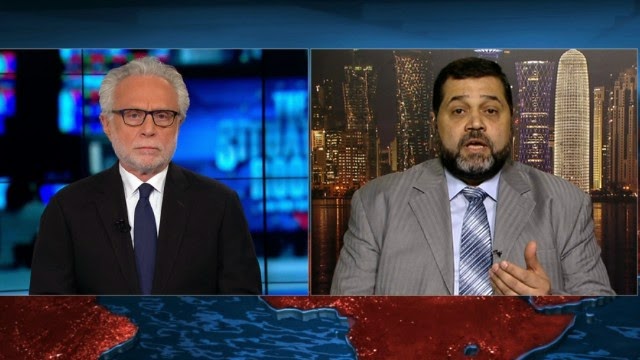 
Enjoying greater media exposure during the Gaza war,  Hamas has been busy spreading the disinformation that the Muslim world welcomed Jews as 'normal' citizens before the establishment of Israel. JIMENA, the US organisation representing Jewish refugees from Arab lands, has been equally busy countering the lie. Article in Digital Journal:

Amidst the flurry of international media surrounding the Israeli-Palestinian conflict since Operation Protective Edge, one crucial voice continues to be co-opted and silenced: that of indigenous Mizrahi Jewish refugees from the Middle East and North Africa.

In an August 6, 2014 interview on CNN's "The Situation Room" with Wolf Blitzer Hamas spokesman Osama Hamdan was questioned regarding his accusations that Jews "slaughter Christians in order to mix their blood in their holy matzoh." In response, Hamdan denied the Anti-Semitism in Arab countries, by painting a picture of Islamic societies as pluralistic and accepting of Jews: "The Jews lived in the Arab region and among the Muslims as normal citizens. When the Jews were kicked from Europe in the mid-ages, they came to live in peace in our countries, and they were accepted." JIMENA President and Libyan native, Gina Bublil-Waldman counters by noting that, "Jews have had a continuous presence in the Middle East for over 2,500 years – an entire millennium before the advent of Islam. Under Muslim rule, many Jewish communities in the Arab world were relegated to a subservient, second-class "dhimmi" status."

Hamdan is only the most recent to make this claim. Dr. Mousa Abu Marzook, then Deputy Head of Hamas' political bureau, stated in an August 25, 2008 interview with IslamOnline: "The Jews who were living under the Islamic rule were the happiest on earth…Jews lived freely and ran prosperous businesses in Egypt and Baghdad, and the markets of Baghdad are evidences of what the Jews owned. Jews did not face any persecution or mistreatment."

Hamas also refuses to recognize Mizrahi refugees, instead blaming them for their own exile and the plight of the Palestinians. In a September 22, 2012 public statement published by Ma'an News Agency, Hamas spokesman Sami Abu Zuhri condemned the first UN conference on Jewish refugees from Arab countries, held in New York in 2012, claiming that "those Jews are criminals rather than refugees… They were actually responsible for the displacement of the Palestinian people after they secretly migrated from Arab countries to Palestine before they expelled the Palestinians from their lands to build a Jewish state at their expense."

As a leading representative voice of Jewish refugees from Arab countries, JIMENA: Jews Indigenous to the Middle East & North Africa aims to achieve universal recognition of the Mizrahi refugee experience by collecting and sharing the personal and communal eye-witness testimonies of some of the 850,000 Jews who fled Anti-Semitic persecution in the Arab world. Legal experts assert that the UN Agency for refugees (UNHCR) recognized Jews fleeing Arab countries as bona fide refugees. UN Resolution 242 which was unanimously adopted by the UN Security Council officially recognized Jewish refugees from Arab countries.

In a JIMENA testimony, Iraqi-born author Emil Murad describes the long history of Anti-Semitism in Iraq: "From l930 all Iraqi governments systematically suppressed any sign of Jewish or national consciousness on the part of the Iraqi Jews...study of Jewish history was forbidden, restrictions were imposed on relations with Jews abroad and Zionism was considered to be treason." In 1941, these actions culminated in the massacre known as the Farhud: "They began dragging Jews out of buses and murdering them in the road. Wild crowds and defeated soldiers who had returned with their weapons to the city, saw the pogrom as a celebration and a sort of amusement. The Jewish Quarter in the city centre became a battlefield, with looting, robbery, and rape…The pogrom inflicted mortal wounds on the Jewish community."

JIMENA President Gina Bublil-Waldman recalls the danger to Jews in Arab countries. "We were denied the most basic human and civil rights, such as the right to become citizens, the right to vote, the right to hold public office, or hold government jobs." Waldman remembers the pogroms in 1945 in her hometown of Tripoli, Libya: "Libyan Arabs looted and burned Jewish homes and killed Jews. They dragged my neighbors and relatives out on the streets and slaughtered them… Nine synagogues – four of them in Tripoli – were burned to the ground, and 35 Torah scrolls were destroyed."

Mrs. Bublil-Waldman relates to ethnic and religious persecution in Muslim countries today: "Mizrahi refugees can empathize and serve as great allies to minorities from Arab countries. Honoring Mizrahi history is key to understanding the suffering of Yezidis, Christians and other oppressed groups, including Palestinian refugees, in the Middle East."


Read article in full:
Posted by bataween at Monday, September 01, 2014

Two things: 1) CNN is as least as antisemitic as the BBC and 2) Wolf Blitzer is a tired sad old pathetic loser who lets anyone he 'interviews' about anything at all say whatever they like unchallenged.