Jewish shrines and synagogues in Iraq and Syria are amongst ancient archeological sites now being pillaged by Islamist terrorists. UNESCO is warning art dealers and museums not to buy valuable antiquities smuggled out of the region, AP reports: 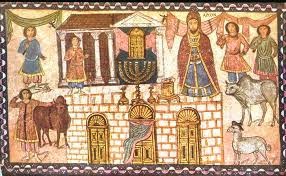 Mural from a 2nd century CE synagogue at Dura Europos, Syria, showing the consecration of the tabernacle

The Islamic State militants seek to purge society of everything that doesn’t conform with their strict, puritanical version of Islam. That means destroying not only relics seen as pagan but even some Islamic sites — Sunni Muslim shrines they see as idolatrous, as well as mosques used by Shiites, a branch of Islam they consider heretical.

In and around Mosul, the militants destroyed at least 30 historic sites, including the Islamic mosque-shrines of the prophets Seth, Jirjis and Jonah. The shrines were centuries old in many cases.

But their extremist ideology doesn’t prevent them from also profiting from the sale of ancient artifacts, either by selling them themselves or taking a cut from thieves who are increasingly active in looting sites.

The shrine of Jonah was built on top of an unexcavated palace in the ancient Assyrian capital of Nineveh. After blowing up the mosque, thieves burrowed underneath and are believed to have taken artifacts, said Rasheed, citing reports from local antiquities officials who remain in Mosul.

It is unclear how much the militants are earning from antiquities. US intelligence officials said the Islamic State rakes in more than $3 million a day from multiple sources, including smuggling of oil and antiquities, human trafficking, extortion of businessmen, ransoms and outright theft. The officials, who spoke on condition of anonymity to discuss classified assessments, said the militants sell goods through smuggling networks in the Kurdish region, Turkey and Jordan.
In civil war-torn Syria, looting of archaeological sites is believed to have increased tenfold since early 2013 because of the country’s chaos, said Maamoun Abdulkarim, Syria’s director-general of antiquities and museums. The past year, the Islamic State group has overrun most of the east, putting a string of major archaeological sites in their hands.

In one known case, they have demolished relics as part of their purge of paganism, destroying several Assyrian-era statues looted from a site known as Tell Ajaja, Abulkarim said. Photos posted online showed the gunmen using hammers to break apart the statues of bearded figures.

More often, the extremists seem to have latched onto the antiquities trade.
For example, the 2,300-year-old city of Dura Europos is being pillaged. The site is in a cliff overlooking the Euphrates near the Iraq border in an area under the Islamic State group’s control, and satellite imagery taken in April show it pockmarked with holes from illegal digs by antiquity-seekers.

Images showed hundreds of people excavating on some days from dawn to nightfall, with gunmen and gangs involved, said Abdulkarim. Dealers are at the site and “when they discover an artifact, the sale takes place immediately,” he said. “They are destroying entire pages of Syrian history.”

Dura Europos is a remarkably well preserved cultural crossroads, a city first founded by Alexander the Great’s successors and later ruled by Romans and various Persian empires. It boasts pagan temples, churches and one of the earliest known Jewish synagogues. Archaeologists in 2009 found likely evidence of an early use of chemical warfare: During a 2nd century siege, Persian attackers dug tunnels under the city walls and set fires that poured poisonous sulfur-laced fumes on the Roman defenders above.

Alarmed by the militants’ advance, the United Nations’ cultural agency UNESCO adopted an emergency plan to safeguard Iraq’s cultural heritage. It called on art dealers and museums not to deal with Iraqi artifacts and alerted neighboring countries of potential smuggling.

“We are very, very, very concerned that the situation could be aggravated in a way that causes more and more damage,” Nada al-Hassan, of the UNESCO World Heritage Center, told The Associated Press.

Read article in full
Posted by bataween at Sunday, September 21, 2014

heartbreaking.
But as to the Dura-Europos murals, I understood that they were in a museum in Istanbul. Is that wrong?

I think some are in a museum in Damascu