IS jihadists are a 'Jewish creation' 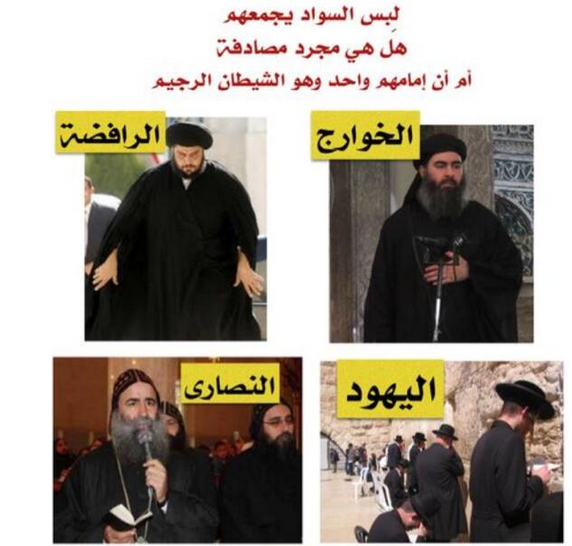 Sunni social media are drawing parallels between the Islamic State army leader Khalifa Ibrahim (top right) and the Shi'ites (top left), the Christians (bottom left) and Jews at the western wall. Is their shared black garb coincidence? asks this advertisement.

Here we go again. Whenever forces in the Arab and Muslim world want to discredit an individual or movement - they spread a Jewish conspiracy theory. The Islamic State army, now being bombed by western forces, is a 'creation of the Jews'. This belief is being fuelled by the (Sunni) suspicion that the West has only been moved to act when minority interests are at stake. It must be stressed that there are no known Jews living in the zone of northern Iraq now controlled by IS.

The suspicion among Arabs towards the US had increased after it started to bomb IS positions when the latter’s forces were 15-17 km away from Erbil, the Kurdish capital. This caused the Arabs at large (Sunnis and Shiites) to say that the US did not care to act when 250, 000 Arabs were killed in Syria during the last three years, and when IS stormed western Iraq during the last year, but it cared for the Kurds, Yezidis, Christians…. This further fed the “conspiracy” theory in Iraq and raised anti-Semitism in the country.

The leading Sunni scholar Ahmed al-Qubaisi has declared that the different terrorist organisations are "a Jewish Creation”. However,  a prominent Iraqi Shiite cleric, Ayatollah Sayed Mortada al-Qazwini, has also described IS as “a Jewish-Israeli organization, established to tear apart the land of Muslims.”

Furthermore, an advertising campaign against IS appearing on the Iraqi satellite television channel Afaq  showed a snake with the mark of IS coming out of the Jewish Star of David. In the image above, Sunni social media equates the IS leader Khalifa Ibrahim to religious Jews, a Christian Bishop, and Shi'ite Muqtada al-Sadr, who have black garb as their common dress.

A rough translation of the writing at the top of the picture says: "The black wearing (garb) is the one that combines them and is common among them - Is it just a coincidence, or that their Imam is One who is the Accursed Satan"?

In the picture, the IS leader is called "Khawarij" (i.e. one of those who rejected the leadership of the last Rashidin Khalifa), the Shi'ite Muqtada al-Sadr is called "al-Rafidha" ( the Shi'ites are accused of denying the completeness of the Qur'an),  a picture of Jews at the Western Wall; a bishop represents the Christians.

Several Arab media outlets have also circulated a story claiming that IS leader Abu Bakr al-Baghdadi is a JewishMossad agent by the name of Simon Elliot.

Assad's a Jew (Times of Israel)

Is Gaddafi a Jew?

the Shi'ites are accused of denying the completeness of the Qur'an),??

This is not exactly what they differ on

They have believe that after The passing of The prophet Mohammad (ص) the khilafa should be to Imam Ali (رض) no to Ameer Al-Mouamineen Abu Bakar (رض) in additions to other things but that main argument.

This ridiculous conspiracy theory was voiced by a Labour MP in the House of Commons on Friday ...

of ourse it's the Jews' fault!!!
sultana

Aren't the Iranians claiming the same thing -- that IS was created by the CIA and Mossad?