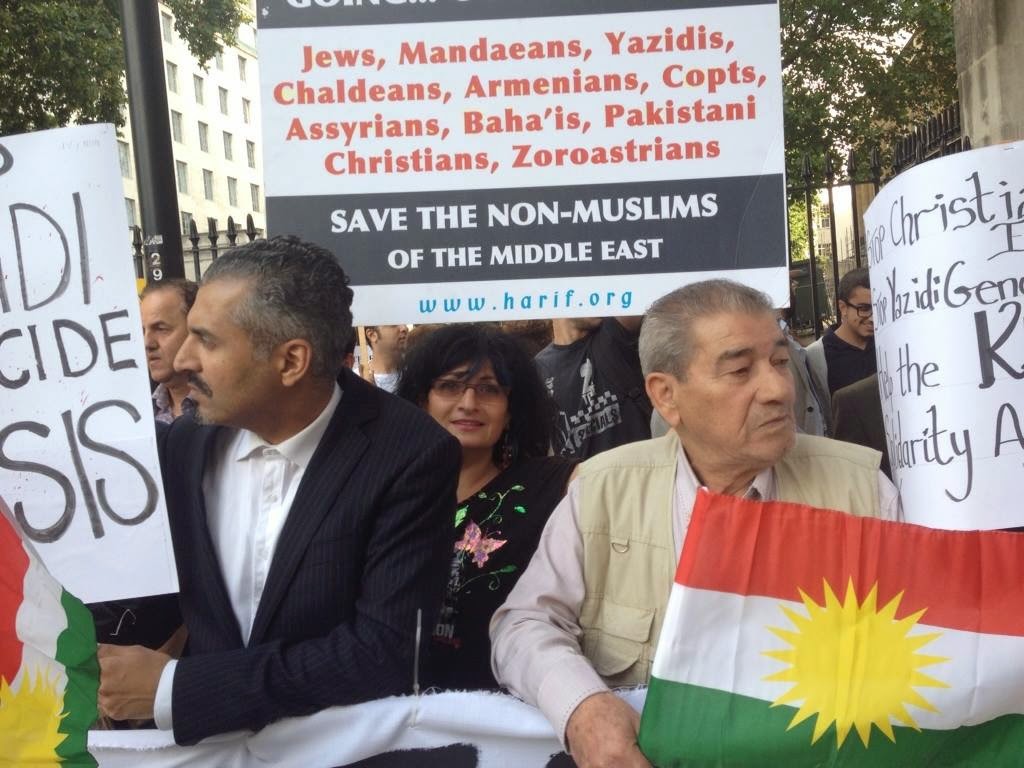 Demonstrators in London protesting at the genocide of minorities in Iraq


The current disaster afflicting minorities in Iraq, threatened by the advancing Islamic State army (IS), has had a positive unexpected effect: a Jewish voice was heard on the BBC programme, Beyond Belief.

You can hear Edwin Shuker (at 10 minutes into the programme) give an eloquent potted history of his life in Iraq, how the ancient Jewish community was persecuted again after the murder of King Faisal ll in 1958 and most of its remaining members fled to freedom over the mountains of Kurdistan in the 1970s.

Shuker was introduced by presenter Ernie Rea as an 'Arab' Jew - approved BBC-speak. Shuker told Point of No Return that he has never used this expression in his life to describe either Jews or Christians.

To the BBC's credit, however, the injection of a Jewish voice puts into perspective the ethnic cleansing of Iraq's minorities. Yazidis and Assyrian Christians are the latest to suffer from the IS's demands: pay an unaffordable jizya tax, convert to Islam or die. Hundreds have been killed and their women and children sold into slavery.

Ernie Rea and his guests projected the BBC party line that until the 20th century Iraq was known as a 'harmonious melting pot of religious and ethnic diversity'. No mention of the 1941 Farhud.

All agreed that the persecution of the Jews (attributed solely to the Ba'ath party) was 'political' rather than religious.

Dr Reza Pankhurst, author of The Inevitable Caliphate, was revealed only at the end of the programme as belonging to Hizb-ut-Tahrir, a banned Islamist organisation in the UK. He made the dhimmi status of non-Muslims sound like a privilege and the caliphate sound like a bit of necessary dental surgery: it may hurt in the beginning, but it will benefit you in the end.

Gerard Russell, former British and United Nations diplomat and author of "Heirs to Forgotten Kingdoms: Journeys into the Disappearing Religions of the Middle East, suggested that the survival of non-Muslim minorities was a tribute to the 'tolerance' they experienced under Islam in Iraq. Later in the programme, however,  Russell admitted that the 'tolerant' Ottomans had managed to massacre three-quarters of all Yazidis.

Only Dr Erica Hunter, Senior Lecturer in Eastern Christianity in the Department of Religions at the School of Oriental and African Studies in London, was sanguine about the impact of 'dhimmitude' on non-Muslims, suggesting that minorities survived in Iraq into the 20th century despite Islam, not because of it.

At the end, the academics puzzled over what conditions needed to exist for Edwin Shuker to be able to 'return' to the country - a favourite BBC theme.

You can hear a podcast of Beyond Belief: The religious history of Iraq over the next year.