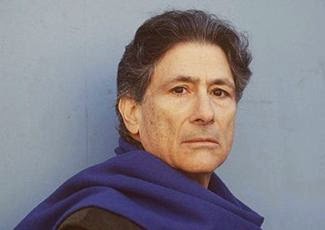 A new book by Joshua Muravchik, Making David into Goliath, exposes the late academic Edward Said (pictured) as a fraud whose Orientalism turned history on its head: he made Arab Muslim imperialists into victims and colonised peoples  into colonialists. The brilliant Daniel Greenfield explains in Front Page Magazine:

Edward Said transformed the Muslim and Arab colonists into the oppressed indigenous peoples pitted against European colonizers. The complex nuanced realities of legitimate scholars who recognized that Europeans and Arabs had both been imperialists and colonizers in their time were swept aside by Said’s nationalistic polemics.

By damning legitimate scholars as racist colonialist Orientalists, Edward Said was able to impose his own racist and colonialist revisionist history on academia.
The New Left had made Third World nationalism into its new creed. Said’s support of the PLO made him a voice for justice no matter how many lies he told or how his botched scholarship perverted history. Third World nationalists could legitimately call on Western guilt and act as moral voices on campus at the behest of a left that glibly assumed that only political terror would end the cycle of oppression.

The unfortunate truth of human affairs is that everyone is oppressing someone else. The great question that the left has been unwilling to address is who their designated victims are oppressing.

By treating the likes of Edward Said as reservoirs of unchallenged morality, the left had become complicit in the oppression of others. The old lessons of the USSR and the French Revolution, the danger of handing unlimited moral authority to outraged fanatics with an agenda, had not been learned. Instead class made way for race. The elites who had claimed to speak for the workers in France and Russia were dismissed. The new elites were wealthy prep school grads like Edward Said who claimed to speak for a non-existent people in an imaginary country based on three vacations he had taken there.

It was not only a breathtakingly impudent act of colonialism, but one that had severe consequences for the intellectual integrity of academia. Edward Said had staked out his place in the academic revolution by denouncing just about everyone else for their Orientalism. Facts were his weak point, but his tactics were Stalinist. Denouncing potential opponents as a class allowed him to turn his own Orientalism into the Lysenkoism of his field. It was not the quality of his scholarship that won him influence, but the broadness of his denunciation. Said’s work was not inclusive, it was exclusive. It came to bar the door.

In Making David Into Goliath, Joshua Muravchik dissects many of the myths and frauds that Edward Said built up around himself. And yet the myths can never be entirely destroyed because of the crucial role that he played in the alliance between the New Left and Third World nationalists. His ideas helped assign intellectual credibility to the intertwining of two reactionary totalitarian movements struggling to remain relevant by denouncing every newer system of government and thought.

Like many racists, Edward Said’s denunciations of others were really expressions of his own limitations. Said condemned his academic enemies for failing to see the diversity of the east, when it was Said who refused to see the diversity of the west. Edward Said reduced his opponents to crude stereotypes while accusing them of reducing Arabs and Muslims to crude stereotypes.

Edward Said accused his opponents of constructing colonialist myths, but his obsession with Israel led him to promote a colonialist myth in which his imperialist ancestors were the true indigenous people and the Jews, the majority of whom were Middle Eastern refugees, were foreign usurpers. (My emphasis)


Edward Said tainted scholarship with this revisionist nationalist history. His defense of Arab and Islamic colonialism in an era in which academia no longer looked kindly on conquerors required him to turn history on its head and manufacture a narrative of oppressed colonizers suffering at the hands of the newly liberated indigenous people whom they had oppressed.

This local perversion of history fitted into the larger global perversion of Orientalism which indicted Middle Eastern scholarship for its intellectual colonialism as part of Said’s effort to colonize the study of the Middle East with his own tribal nationalism. Like a thief who pretends to be a policeman to scare away the other competing thieves he imagines are lurking nearby, Edward Said disguised the imperialism and colonialism of his agenda by dressing it up as anti-imperialism and anti-colonialism.

From his biography to his ideas, from his head to his toes, Edward Said was a fraud. Neither a great scholar not a great thinker, Said’s private nationalism played into a larger intellectual debate taking place within the culture. His work lives on because of grants from Saudi princes and because it serves as a pillar of a post-American academia in which political indictments have taken the place of research.

Arafat hijacked planes in the name of a phony nationalism, but Edward Said hijacked academia. These two Cairo natives had briefly lived in Israel as children and built careers around their imperialist efforts to colonize Israel with myths and violence, with lies and terror, pretending to be the oppressed when they were actually the oppressors.

Placing the colonial boot on the Arab foot
Posted by bataween at Tuesday, August 26, 2014

No ideologue is successful unless he tells the unwashed mob what it already believes to be true and wants repeated endlessly.

what a complicated text
But aren't you giving this Said fellow too much importance?
we've had this type of fraud in France with a "socalled" RaBBI who claimeD he had graduated from the SORBONNE; aFTER RESEARCH IT WAS DISCOCERED THAT THAT RABBI HAD NEVER SET FOOT IN THAT TEMPLE OF KNOWLEDGE! And as you say in French you could have given him le bon Dieu sans confession!
I watched that program every sunday morning
sultana

I wish we could say the same about Edward Said, but he unfortunately has influenced a generation of students around the world. The damage is done!

l agree that Said has had a great influence, unfortunately, on the academic world worldwide.

I disagree with the author, J Muravchik. Whitewashing the Arab and Muslim historical record goes back long before Edward said. Consider the case of Prof William Polk:
http://ziontruth.blogspot.co.il/2007/07/embellishing-muhammad-islamic-conquests.html

Edward Said was as much as a credited professor as Ward Churchill was. This came out in the 1990s which was very embarrassing as he was a guest at the Clinton White House many times. He was also the promotor of many causes against the US's relationship with Israel and even fueled the rumor that the MOSSAD did 9-11. He was asked to leave the Florida learning institutions and even hung around the UC-Davis (Davis California) campus causing alot of anti-semitism on site with another fake professor Norman Finkelstein. Ugly Birds of a rancid feather stick together.

Edward Said, along with many others who would also frequent Yahoo Chat and Paltalk rooms pushing their BS against Jews and the US - yet enjoying their status as "citizens" when in reality they had LIED to get to the US as "refugees".

If the US was to audit it's immigration records for the last thirty years, it would be surprising to see how many came in via forgeries and plain lying just to come into our country.

Unfortunately, this Administration like the last four plus administrations do not have the right stuff (to use a term) to undo the damage that has been caused. Had the US did the job properly, we probably would not have had any Islamic terrorist attack on 9-11 or the Boston Bombing. And we do know who the enemy of the US is. Unfortunately the current administration is supporting it.

to Anon, you may be thinking of somebody other than Edward Said. He was at Columbia U for many many years. I do consider him a crook. But on another point you are wrong too. Said's father, William, was an American citizen and served in the US army in WW2. So when the Said family left Egypt during Nasser's time, they would have had some sort of easier time getting in because of the father's US citizenship.