Will Algerian synagogues re-open? Not yet 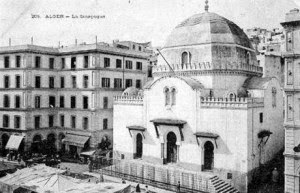 
In a discussion forum with the newspaper Liberte, Algeria's new minister of religious affairs, Mohamed Aissa,  has not ruled out the possibility of synagogues which were closed in the 1990s re-opening. Surprise, surprise, he revealed the existence of a 'small but discreet' Jewish community.

"There is a Jewish community in our country. It has a right to exist. Its representative, a patriot, is in constant touch with the ministry. But for security reasons we cannot foresee  their re-opening in the immediate future."

The minister said that the holy places of other religions had been restored: "We have helped restore the Church of Our Lady of Africa and St Augustine's church in Annaba (Bone)."

"Let us note that synagogues  are open in most Muslim countries - Tunisia, Morocco, Egypt, Syria, Iraq, Indonesia, Lebanon and Turkey where the largest synagogue in the world has been restored. Istanbul has 20 synagogues..."


My comment: the minister's statement is full of misinformation. Roger Said, the community's 'representative' (who lived mainly in France), died in 2012. Turkey does not have the largest synagogue in the world. There are scarcely any open synagogues in these countries and none contain shining examples of thriving Jewish life. With the exception of Morocco, Tunisia and Turkey, you can count the numbers of Jews on one hand. There are officially no Jews left in Algeria at all and the revival of the Jewish community is not on the cards anytime soon. As one cynic remarked on the Algerian-Jewish site Zlabia: "they want us back so that we will flee and they can rob us all over again."