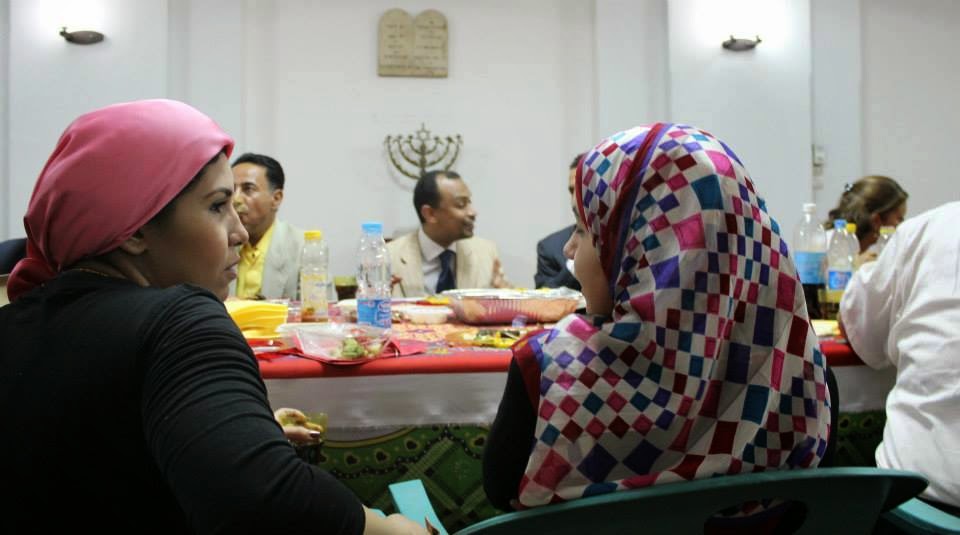 It is all the rage, apparently, for Jews to be observing Ramadan.  But when the last few Jews of Egypt held an Iftar meal at a Cairo synagogue, it felt more like a validation of ethnic cleansing than a demonstration of interfaith harmony. Lyn Julius blogs in the Times of Israel:
The BBC carried a report of Jews and Muslims breaking the Ramadan fast with a ‘Kosher’ Iftar meal in a London synagogue. According to the Times of Israel, another London rabbi, Natan Levy, ‘ stunned members of the Jewish community by observing the Islamic month of fasting after witnessing first-hand the lack of engagement between the two faiths’.

Then Yachad, dubbed the British J-Street, announced its Tisha-b’Av/Ramadan fast dedicated to ‘non-violence’ and to ‘peace’, a ‘choose life’ fast: “All over the world Jews and Muslims, Israelis and Palestinians, will be fasting together, against violence, and for peace. “

And now we hear that the Adly synagogue in Cairo hosted an Iftar meal. This is the meal eaten at sunset at the end of a day’s fasting. In the comments thread to an item in the Egyptian press, Omar gushes: “This is such a great thing, dispelling the absolute hatred for Jews and showing us “Hey, we’re all Egyptians too!” Another reacts approvingly: “This is the true spirit and teaching of all three monotheistic religions. A beautiful step in the right direction and I hope it doesn’t stop there and it’s not just during Ramadan but throughout the year and years to come! Salam, Shalom and Peace to all!”

The latter demonstration of ‘interfaith harmony’ is the saddest of all.
The Egyptian Jewish community comprises just 15 people, mostly widows or elderly women married to non-Jews. They are led by the fiercely anti-Zionist Magda Haroun, 62. She is her father’s daughter. So fanatically patriotic was Shehata Haroun that he chose to let another daughter die of leukaemia rather than forfeit his Egyptian nationality to seek medical treatment abroad.

Since becoming leader of the Jewish Community Council in April 2013 on the death of her predecessor Carmen Weinstein, Magda has not done much to celebrate her own faith: at least Carmen marshalled what was left of Egypt’s Jews, together with Israeli diplomats and interested tourists and well-wishers, to mark Jewish festivals. Since Carmen’s passing, the Jewish community has not celebrated the Passover Seder. It was cancelled this past year – ostensibly out of respect for Magda’s sister Nadia, who died suddenly aged 59. Similarly, the community found excuses not to mark Rosh Hashana in 2013.

Magda wants to show that Jews are good Egyptians; they built Egypt. They must not be confused with Zionists. But the spurious distinction between Jews and Zionists did not save a thriving 80,000 strong community from being expelled. Jews were targeted not for what they believed, but what they were. Neither can Zionism be the pretext for the persecution of Egypt’s other harassed minority – its eight million Coptic Christians.

As if it is not enough for the Jewish presence to be wiped out across the region, Jewish history is being erased, synagogues are being demolished, and ancient shrines with a distinctive Jewish character converted to mosques.

This does not mean that Jews and Muslims should not share each others’ festivals. These well-intentioned grass-roots initiatives humanise Jews and Muslims to each other, especially during times of war. After all, more and more Gentiles, all the way up to the White House, are celebrating the Passover Seder. Why should Jews not mark the most important month of the Muslim religious calendar?

There is a difference, however. Whereas Natan Levy belongs to a robust Jewish community with the self-confidence to practise its faith, Magda Haroun is a beleaguered ‘dhimmi’. She has failed to call Muslim Egyptians to account for driving her community to extinction. Instead they are allowed to feel good about themselves and their ‘ tolerance’ of others.

The sun is setting on the Jewish community of Egypt. Soon there will be ten, or five Jews left in Egypt. How few do there need to be for someone to hail them as proof of Egyptian ‘pluralism’?

Magda, as the youngest Jew in Egypt, will be the last person to turn off the light. At the Iftar celebration at the Adly synagogue in Cairo, Muslims by far outnumbered Jews. After three thousand years, Egyptian Judaism is on its last legs, and Jewish life reduced to empty synagogues without Jews. This Iftar celebration marked the triumph not of ’tolerance’, but of capitulation, humiliation, and ethnic cleansing.

Cross-posted at Harry's Place
Posted by bataween at Monday, July 14, 2014

I see them, from the heights I view them. I see a people who live apart and do not consider themselves one of the nations.

be careful not to be ensnared by inquiring about their gods, saying, "How do these nations serve their gods? We will do the same."


"Be careful to do everything I have said to you. Do not invoke the names of other gods; do not let them be heard on your lips.

hmmm I think Hashem would differ in the thought that "there's no reason why Jews and Muslims can't celebrate each others' festivals". just sayin kb

Ramadan is upon us and Muslims around the world are getting ready for this. However, a problem rises up, on which exact date Ramadan is going to start?