From 1940 to November 1942, thousands of people were interned in North Africa, in civilian or military camps located mainly in Morocco, in the eastern region between the Rif and the Algerian border. Jean-Paul Fhima in Tribune Juive has undertaken some valuable research into this dark aspect of Morocco's wartime history: (with thanks: Michelle)

Today, in these remote villages crushed by the sun, nobody remembers. 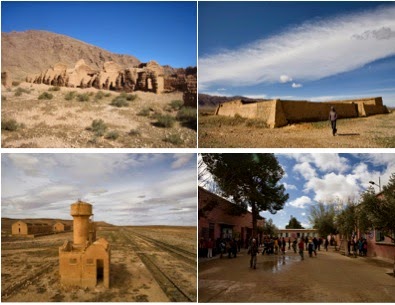 All in all, in the French protectorate of Morocco, there were 14 camps of various kinds involving 4,000 men. A third were Jews of various nationalities.The inmates were all men except in Sidi Al Ayachi, where there were women and even children. Some camps were guarded detention centres, ie real prisons for political opponents of the Vichy regime. Others were so-called'' transit'' camps for refugees. Still others were exclusively reserved for foreign workers. Or Jews. The Bou Arfa camp (above) was under the authority of the railway company, Mediterranean-Niger iron, commonly called Sea-Niger (or Merniger).Long suspended, the old colonial project was revived in 1941 for the supply of goods to the metropolis. Under Vichy, the Trans-Saharan railway became a major symbol of collaboration with the Third Reich. Therefore there was a need for labor.

Thousands of Spanish Republicans fleeing Franco's repression were employed in groups of foreign workers (GTE) responsible for the construction and maintenance of railways.The pace of work was brutal and inhumane because they had to work at speed.The Spanish workers (694 of 818, CRI Report, July 1942) were turned into real convicts. Jews deported from Central Europe and French Communists were transferred there. Daily life there was terrible. Many died of abuse, torture, disease, hunger or thirst, scorpion stings or snake bites. 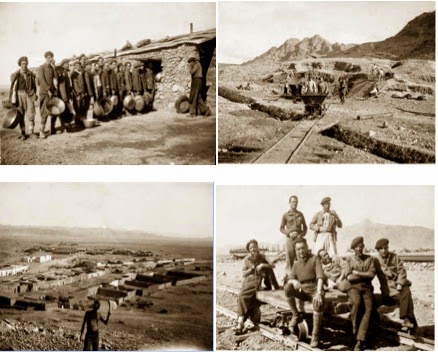 Berguent (Ain Beni Mathar) camp was run by the Department of Industrial Production. It was reserved exclusively for Jews (155 in July 1942, and then 400 early 1943, according to the CRI report). "But this spiritual comfort did not reduce in any way the fact that Berguent camp was among the worst," said Jamaa Baida. The Red Cross demand to have it closed was ignored.The Jews who were in Berguent, especially from Central Europe, had previously fled to France. Volunteers for the Foreign Legion, they were demobilized after the defeat of 1940 and then interned "for administrative reasons." This was the case with Saul Albert, a Turkish citizen who arrived with his family in France in 1922 . He was a  prisoner at Berguent until his release in March 1943. In his diary, he says:


In a petition written by the prisoners themselves, we learn that the sick were isolated without being treated, the punishments were severe and unjustified. The supervisors, many of whom were German, behaved tyrannically, with hostility and malice. "They should have joined the notorious Nazi SS." Some prisoners managed to escape, reaching Casablanca and joining Allied forces.


At Boudnib, a small town of 10, 000 inhabitants, the current military barracks are the last witnesses of the former French army camp. Older residents retain fragments of memory: "There are two things I can tell you with certainty. The first is that Boudnib consisted mainly of Jews. The second is that most of the city camp prisoners were of Italian origin because they came regularly to teach us music lessons at primary school "(magazine Tel Quel No 274, from 19/25 May 2007 - original link not working ).


Maurice Rué, a communist journalist, was interned there. He tells us that "of some 40 prisoners, three-quarters were Communists, Socialists and Gaullists .. before the arrival of 40 Jews for a few months."

After the American landing on November 8, 1942, Morocco sided with the Allies. In January 1943, the Allies met at a conference in Casablanca. A strategic and military agreement was signed. Shortly afterwards, the invasion of Sicily (Operation Husky, July 1943) signalled the beginning of the end of German-occupied Europe.

The railway construction in Bou Arfa was not interrupted and the workers' conditions did not change much for the better. They were better paid, as Italian and German prisoners replaced the Communists and Jews. But building the Trans-Saharan  remained an everyday hell. The project, which some called without purpose, was not abandoned by France until 1949.

Otherwise, the camps were hastily dismantled between late 1942 and early 1943.
The documentary by Bill Cran and Karin Davison broadcast on Arte, entitled "The Maghreb under the swastika" (June 2010), gives a voice to  historian Robert Satloff. While recounting the fate of the Jews, the American specialist seeks to understand the role played at the time by the authorities and the local population. He questions in particular the attitude of the Sultan (Mohammed V) whose "unjustly ignored heroism is worthy of (recognition as) Righteous among the nations."

Really? If, indeed none of the 250,000 Jews of Morocco has been locked up in the eastern camps, did  Sultan Mohammed have any real part to play?  I'm not so sure.

The Berber Jewish communities had long been integrated into the Moroccan population. They were living in the villages of the High Atlas and the south (Draa valley) well before the Islamization of the country. At the time of the French protectorate (1912) they still had their own dialect, folklore, oral tradition and religious culture. Dhimmi status guaranteed them protection by the sultan and local potentates (sheikhs, pashas or Caids). Living in the commercial districts since the Middle Ages, Moroccan Jews were well integrated into the urban elite. Attached to their neighborhood (the mellahs), they were merchants and notables, doctors and teachers. They contributed to the dynamics of society.

One can understand the reluctance of (the future) Mohammed V (to agree) when the Resident-General of the Vichy government, Charles Nogues, wanted impose the first statut des juifs in October 1940 and the second, even stricter law in June 1941,  because  restrictions and bans could seriously destabilize the economy. But he signed those dahirs (decrees of the Sultan), with all the discriminatory effects they implied. Jewish doctors were excluded, as were lawyers from the Bar Association, and students from the school system.


However, Moroccan Jews were never threatened with deportation to camps reserved for French and foreign Jews.


During the war, the lives of Moroccan Jews would not have been very different from that of Muslims. The yellow star was not worn, living conditions and privations were the same (Mohamed Hatimi, Tel Quel, No. 274). An inventory was drawn up of Jewish property but Jewish assets were not seized, rather they were temporarily 'transferred'.

Jews were more worried by anti-Semitic acts carried out by French settlers than by the natives. The German presence was very discreet or non-existent, apparently confined to the one city of Casablanca.

Scholars like Mostafa Bouaziz or Robert Assaraf ("Mohammed V and the Jews", 1997) say that the Sultan obtained substantial improvements (for the Jews) and bought time by postponing as far as possible the implementation of anti-Jewish measures.

Robert Satloff is convinced that an Arab Oskar Schindler existed ("Among the Righteous: Lost Stories from the Holocaust's Long Reach Into Arab Lands," 2006). But his approach is primarily political and is concerned with generating a present-day dialogue between Jews and Arabs.

Other historians are skeptical. Jacques Dahan ("A Moroccan Jew looks at the contemporary history of his country", 1995) regrets the lack of written documents about the supposed benevolent behavior of Mohammed V, while recognizing the positive influence the sovereign had. For Michel Abitbol ("the Jews of North Africa under Vichy," 1955), one should not exaggerate such an idyllic vision.

The French historian of Moroccan origin Georges Bensoussan, a specialist in the Holocaust, explodes this myth of the Sultan as savior of Jews in his book published in 2012 ("Jews in Arab countries: the great uprooting :1850-1975") .

The Sultan had intervened only on certain issues and in private only to serve the interests of his country. "On most counts, he did not protect the Jews," he writes. Let alone those in the camps.

He would not have intervened to prevent the internment of foreign Jews or to improve their living conditions even if he could not ignore their existence. "These camps were outside his area of ​​influence. They were the exclusive remit of the  French army, "says Mostafa Bouaziz.

What, then? Serge Berdugo, former Minister of Moroccan tourism and Secretary General of the Council of Jewish Communities of Morocco recalls: "My father knew there were Jews interned in the East. He went there several times to bring them some food. "

In any event, one should consider the fate of the Jews in Morocco compared to the Algerian and Tunisian Jews whose fate was less enviable. In Algeria, their French citizenship was revoked. More than 12,000 conscripts, excluded from French combat units, were sent to the Bedeau camp from January 1943. In Tunisia, occupied for some time by Nazi Germany, the situation was even worse, despite the feeble resistance of the Grand Bey of Tunis. Subject to the yellow star and forced labor, young people were rounded up as they left synagogues and found themselves in the labor camps of the occupying forces. These camps were often shelled by Allied aircraft. There were many casualties. Some were deported and exterminated in Europe. Their names are engraved on a war memorial in Tunis.

"The camps in the Sahara were the worst of World War II," wrote Martin Gilbert, a British specialist of the Holocaust. Is this a reasonable assessment? Were Bou Arfa or Berguent worse than Auschwitz? "It is clear that no historian dare make a comparison with the Nazi extermination camps in Europe, both ethically and professionally" (Jamaa Baida, University Rabat).

On the other hand, how are we to understand the efforts of some scholars and politicians (Moroccan) to canonize Mohammed V? Is there a politically correct version of the Holocaust in which the Arabs are the forgotten righteous of Yad Vashem? Should we twist history in order to give a special resonance to current bones of contention?

Berguent has an idea of how to respond. For the last two years, a three-day summer festival has been reviving the cultural and historical heritage of the locality (newspaper Le Soir Echos, 7 September 2012). Various popular and scientific meetings and events, where Jews have their place, vaunt the values of tolerance. Learning to live together again is the true symbol of living memory.

The past is a great fragile body to be handled with care.