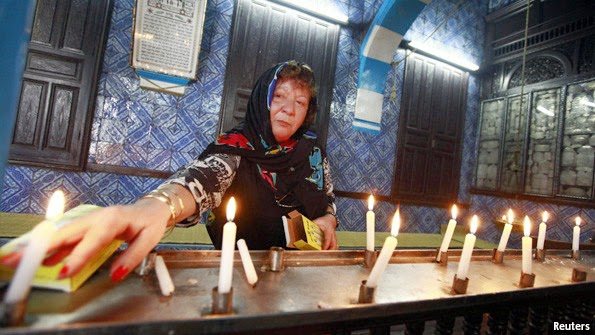 Tunisia's plans to use the annual Lag Ba'Omer pilgrimage to Djerba to boost the country's tourist industry are threatened by a row over whether tourists can enter Tunisia on Israeli passports, The Economist reports:

El- Ghriba synagogue on the island of Djerba off Tunisia's Mediterranean coast has for centuries drawn springtime pilgrims. Members of the country's small Jewish community, which has dwindled since independence to around 1,600, and expatriates are encouraged to make a holiday of it. One hotel in Dejrba even lays on a Kosher menu. But the celebration, due to take place on May 13th-18th, is proving problematic for Tunisia's government.

To take part, Israeli pilgrims have long entered Tunisia on European passports or on special Tunisian-issued travel documents since the two countries have no diplomatic relations. (Small representative offices in Tel Aviv and Tunis were closed in 2000 during the second Palestinian intifada.) Last year, Tunisia's coalition government headed by the moderate Islamist party, Nahda, was keen to demonstrate support for the Jewish pilgrimage. Bezalel Raviv, a singer whose parents come from Tunisia, said he was even allowed to enter on an Israeli passport, having collected a Tunisian visa in Ramallah.

This year the pilgrimage has caused controversy for the technocratic government appointed in January. The dynamic new tourism minister, Amel Karboul, who was lured from her career as a business consultant in Europe, is popular among Tunisians. But critics honed in on her CV, which stated she had visited Israel in 2006. She countered that she had gone to give a training session to young Palestinians, but had been subjected to such lengthy questioning at Tel Aviv airport that she had turned back.

Members of the constituent assembly, including some Islamists from Nahda as well as leftists and nationalists, now want to question Ms Karboul over reports that Israeli pilgrims visiting Djerba will all be allowed to enter on their Israeli passports. She says the authorities have merely formalised the previous arrangement of issuing special papers. This sparked rumours that the government was moving towards a "normalisation" of relations with Israel, prompting a small demonstration in Tunis on April 26th.

The authorities are under pressure from another direction. Miami-based cruise operator Norwegian Cruise Line said on March 11th that its ships would no longer call at La Goulette port near Tunis after "Tunisia refused to allow Israel nationals the right to disembark" using their Israeli passports.

The upset is also ruining the tourism ministry's plans to use the pilgrimage to attract back holiday-makers. French tourists are by far the most numerous visitors to Tunisia, but almost 30% fewer came in 2013 than before the 2011 revolution. The ministry may now be wondering whether it is wise to put the annual event in the spotlight. A generation ago the pilgrimage was a relaxed affair, but nowadays it takes place under intense security. A jihadist suicide bombing at the synagogue in 2002 killed 21 people.

The old Djerba pilgrimage....a wonderful way for Tunisia to fool the world into thinking that it is not an apartheid state.