Of Nakbas, fools and fingers 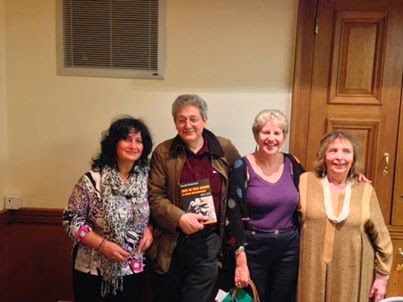 
While Palestinians marked the 66th anniversary of the ‘catastrophic’ mass flight of Arab refugees from Israel in 1948, the French historian Georges Bensoussan (pictured), on a visit to London, was focusing on a different nakba. He was asking a packed audience the rhetorical question: why do people, even when presented with incontrovertible proof, persist in their denial of the mass post-war exodus of Jews? Lyn Julius blogs in the Times of Israel:

It was at the height of the second intifada in 2002, when two Jews a day were being beaten up on the streets of France, that Bensoussan decided to write about Jews from Arab countries. The antisemitism sweeping France then, as now, was being blamed on the Arab-Israel conflict. But Bensoussan, who left Morocco with his family as a six-year-old, had a nagging feeling that the problem had deeper root-causes.

Bensoussan spent ten years researching his 900-page book on the 850,000 Jews driven out of Arab lands in a single generation (Juifs en pays arabes: le grand deracinement 1850 – 1975). He chose not to base himself on unreliable memoirs, but on solid archival evidence.

The condition of Jews in Arab lands is not one of harmonious coexistence between Jews and Arab, shattered by the arrival of Zionism. Nor is it purely a lachrymose tale of woe. Yes, Iraqi Jews experienced the Farhud pogrom in 1941 – but next to the Ukraine, Iraq was paradise, Bensoussan contended.

For 14 centuries, however, Jewish-Arab coexistence was laced with contempt: Muslims kept their non-Muslim minorities in a state of degradation and humiliation as dhimmis. Dhimmitude was most rigorously applied those parts of the Muslim world most remote from Ottoman influence – Yemen, Morocco, and Shi’a Iran. With western colonisation, the Arab world lashed out at its minorities. The word ‘ fear’ keeps cropping up in the archives in association with the Jews.

Jews were not uprooted from their 2,500-year existence in Arab countries by a few Zionist emissaries. Nor did their exodus begin after WW2. Jews were already leaving Morocco in the 19th century to found communities in Portugal, Brazil and Venezuela. Jews migrated from Iraq to India and China. (On the other hand, the Jewish population increased in Egypt).

Bensoussan traces the fault-line between Jews and their Arab neighbours to the onset of 19th century modernity and emancipation. The anti-Zionist Alliance Israelite Universelle schools network, paradoxically, ‘created a Jewish people and prepared it for Zionism’.

Whereas Ashkenazim chose between Judaism and secular Zionism, Sephardi/ Mizrahi Jews saw a continuity between the two, in spite of the initial weakness of the Zionist movement in Arab countries. But from 1929, Zionism also made Jews in Arab countries vulnerable to the repercussions of the conflict in Palestine. After 1948, Jewish communities were held hostage by Arab states.

Another cause of the mass exodus was the blood-and-soil nationalism which prevented Jews from becoming accepted as citizens of independent Arab states. The Arab world eagerly embraced Fascist youth movements and Black Shirts; the influence of the pro-Nazi sympathies of the Mufti of Jerusalem is well-known. His virulent radio propaganda broadcasts spread anti-Jewish hatred. And the Mufti was not the only pro-Nazi Arab leader.

But the key reason for the Jewish Nakba – not the only one but an essential factor – was a matter not of historical fact but deep-seated cultural mentality.
As dhimmis, Jews were despised as half-persons. The were feminised in the Muslim imagination. Like women, they were not allowed to carry daggers. Like women, they had to ride side-saddle.

“The more I studied the question, the more I understood that there was no solution to the Arab-Israeli conflict,” said Georges Bensoussan.

The truth is that the colonised can also be a coloniser, the victim of racism can himself be a racist, and the martyr an executioner.

Like intellectuals blinded to the Soviet regime’s crimes, people today cannot see the truth before their very eyes. There’s a Chinese proverb that says, “When the sage points at the moon, the fool looks at the finger.”

Cross-posted at Elder of Ziyon

Placing the colonial boot on the Arab foot
Posted by bataween at Tuesday, May 20, 2014

I hope there will soon be English translations of these vital books by Bensoussan and Weinstock. Of course, they will be labeled as Zionist propaganda. Or we will have a bleeding heart leftist tell us, "yes, but it was an understandable reaction to Zionism."